Collaborative presentation platform Pitch today announced it has raised $85 million in a series B round of funding and teased a suite of features coming in the next weeks and months. The company is looking to grab a bigger piece of the enterprise pie by offering what it touts as the first “complete platform for presentations.”

Pitch emerged from stealth in 2018, three years after a trio of the startup’s founders sold 6Wunderkinder — creators of the popular productivity app Wunderlist — to Microsoft. By its beta launch a year later, the German company had raised around $50 million in funding from the likes of Slack (via the Slack Fund), Zoom CEO Eric Yuan, and Instagram founders Kevin Systrom and Mike Krieger. By its official launch about six months ago, it had amassed a roster of clients that included Intercom, Grammarly, Notion, and Parse.ly.

Suffice it to say, Pitch had built a pretty solid foundation of backers and customers before it officially went to market.

Fast-forward to today, and Pitch has now raised a substantial chunk of change from investors that include Tiger Global, Index Ventures, Lakestar, and Thrive Capital as it sets about targeting “larger teams” around the globe.

Collaboration plays a pivotal part in Pitch’s pitch (yup), with team members able to engage in a live video chat to discuss formats, content, edits, or more. It can even be used to host meetings.

Beyond that, Pitch offers a slew of premade presentation templates, though it’s designed to enable companies to import their own assets and styles to ensure they stay on-brand — and save everything as their own custom templates.

However, Pitch is all about extensibility, with integrations spanning third-party apps and data streams such as Google Analytics, enabling marketing teams to easily funnel live web performance data into charts and graphs. Pitch also plugs into apps such as Slack (it is an investor, after all), Twitter, YouTube, Google Sheets, and Excel.

With another $85 million in the bank, Pitch has various near-term and mid-term plans to ramp up its product and appeal to bigger businesses. Looking to next year, this will include an all-new enterprise plan with dedicated customer service, single sign-on (SSO) support, and advanced security that will enable companies to share custom links with password protection, as well as granular workspace permissions.

“In our first six months since launching Pitch, we’ve primarily focused on teams of up to 200 people, primarily in small and medium-sized companies, but also larger enterprises,” Pitch cofounder and CEO Christian Reber told VentureBeat. “We aim to be fully enterprise-ready in 2022 and are already implementing improvements to support larger workspaces with significantly bigger teams, as well as meeting enterprise-grade standards.”

Pitch is also gearing up to introduce a bunch of new features, starting in the coming weeks. These include advanced presentation analytics that will provide detailed insights into a presentation’s reach and readership, including engagement levels. 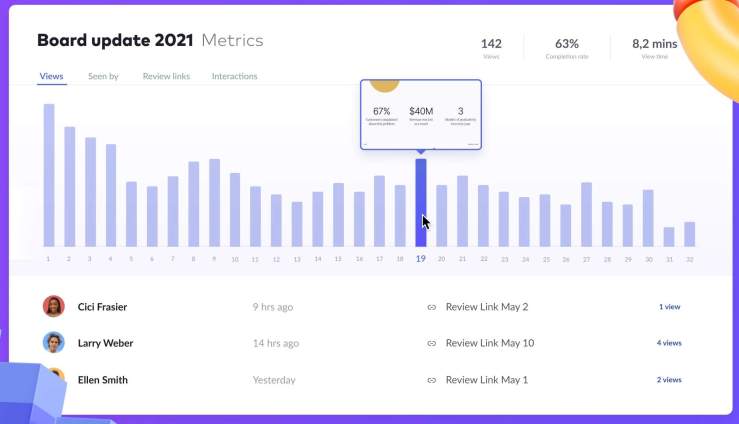 Elsewhere, Pitch is also rolling out a new “narrative recording and playback” feature designed for asynchronous communications, something widely regarded as pivotal for remote-first companies with workers spread across offices and time zones.

“For most businesses, meetings aren’t happening in conference rooms anymore, and teams have been asking us for solutions to help them stay aligned asynchronously, flexibly, and remotely,” Reber said. “That’s why the narrative recording and playback tools are a key part of the product roadmap we’re unveiling today.”

This feature basically allows team members to record themselves talking over a specific presentation or slide.

Above: Pitch: Narrative record and playback

Finding its way into bigger enterprises — which are traditionally resistant to change — could prove to a tricky task. But while Microsoft’s omnipresent PowerPoint remains the default presentation software for most businesses, Pitch hopes its focus on “generation Slack” will help it continue to grow beyond the “tens of thousands of teams” it has drawn to its platform in its short tenure so far.

“We’re making it fast and delightful for teams to create beautiful and impactful presentations,” Reber said. “To do that, we’re unifying the entire workflow of presentations: creation, collaboration, sharing, and publishing — all in one place. That’s what we mean when we say we’re building the first complete platform for presentations.”