Well before any of its competitors put out a similar device, Amazon introduced the Echo Show in mid-2017, incorporating the sound and intelligence of Alexa with visuals to accompany voice responses.

Some of the lessons learned from the first Echo Show are addressed in the second-generation device, which offers a bigger screen and improved user interface for streaming video and which made its debut during an event last month at Amazon headquarters, where nearly half a dozen new Alexa-powered devices were rolled out.

The Echo Show comes in charcoal and sandstone and costs $229. It goes on sale October 11.

One thing immediately apparent is that the switch from a 7-inch to 10-inch screen provides a richer experience, as does an increase in pixel density and an HD screen. The 10-inch screen is consistent with 10-inch offerings from the Smart Display category for Google Assistant.

The second-generation Echo Show also includes design adjustments that may seem basic at first glance but that together make for a more modern device. First, the Echo Show’s two speakers have been moved behind the screen, giving the device the look of a seamless screen. (The first-generation Echo Show had speakers directly underneath the screen for a face that resembles a small television.)

A thinner bezel means four of the eight microphones were moved to the face of the device.

The new Echo Show also has a much improved user interface, which includes quiet actions — essentially, a list of your smart home devices on a screen that lets you turn things on and off with touch. Quiet actions are also available for alarms and routines and can be accessed with a swipe down from the top of the screen. 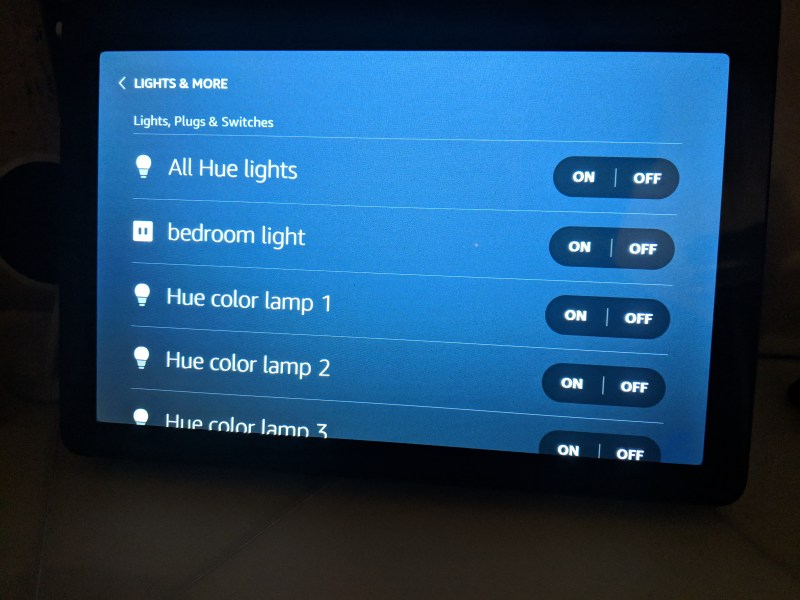 Above: Quiet actions on Echo Show.

Touch control of smart home devices is also programmed to show up each time a smart home voice command is used.

You will notice another big change when you turn the device on and glance at the home page. Rather than a set of bullet points for home page cards, as in the first generation, this device does away with both bullet points and arrows on the edges, which means content on the larger screen now appears to float. 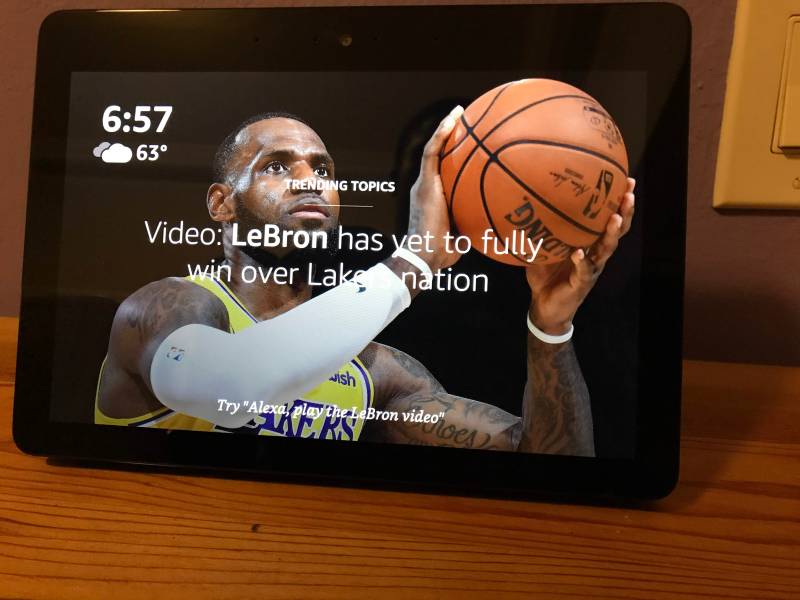 Above: Trending video from the Echo Show home page

The home screen also gets a range of new content — such as box scores for games that just ended and announcements about when your team will play next.

There’s also more trending video from providers like USA Today, along with movie trailers and some world news.

I hope the content comes to include local news and more ways to vary content flashed on the home screen, rather than being limited to a smattering of national and international news headlines. Trending topics can share video or a quick snippet of text on the topic.

This feature will get even more interesting as Amazon becomes more contextually aware and personalized to serve up intelligent query ideas.

Alexa is learning how to suggest skills based on how relevant they are to your question — without requiring you to say the name of a skill for it to launch. This means you can say “Alexa, help me book a handyman” instead of “Alexa, launch HomeAway.”

When Alexa makes recommendations, visual skills are not yet prioritized, but the Best on Screen choice sits atop the smattering of Alexa skills that appear onscreen when you say: “Alexa, show me skills.” 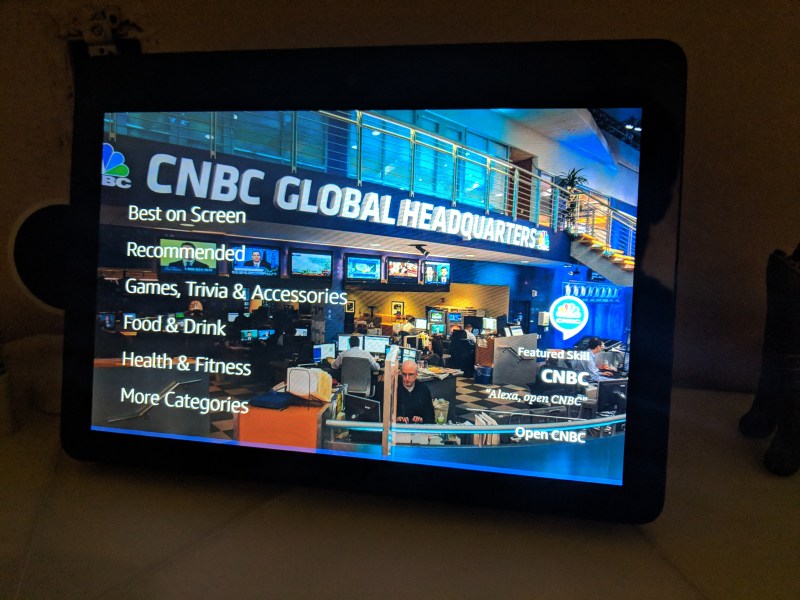 The second-generation Echo Show comes with many additions to its video offerings, and that’s by necessity. About two months after the first-generation Echo Show came out, it lost its ability to play YouTube videos due to a public spat about listing Nest products on Amazon’s online marketplace.

There’s the Fire TV Recast, which uses over-the-air digital signal antenna to pick up about 25 to 30 channels for live TV anywhere. Fire TV Recast will include a DVR and respond to the voice command: “Show me my recordings.” 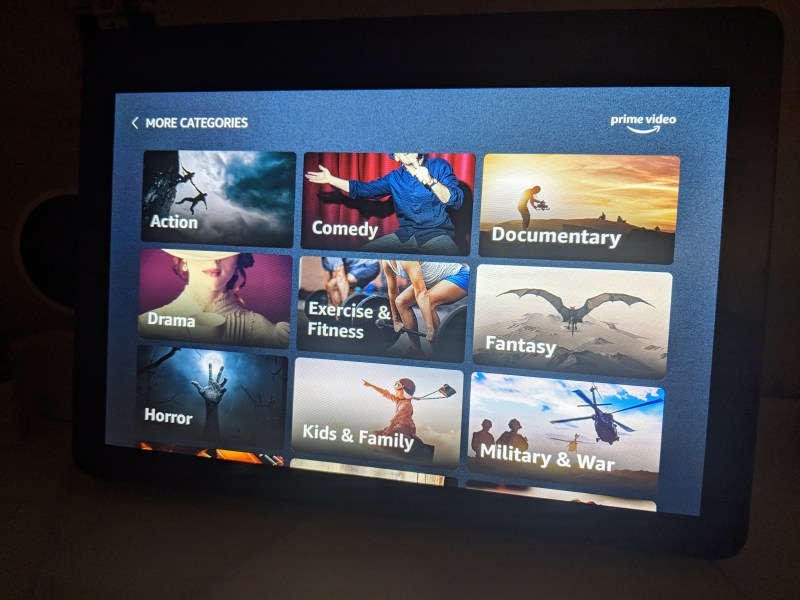 In addition to streaming DVR, the second-generation Echo Show also comes with an improved Amazon Prime Video user interface, which allows you to sort through content by categories or get recommended titles for what to watch next. Prime Video was available on the previous Echo Show, but it only really offered you the ability to toggle between titles left to right instead of seeing a grid of several options.

A similar interface is used for video skills kit users, starting with Hulu and NBC, to give their content a kind of landing page. Hulu and NBC video skills were not made available by the time this review was published.

Alongside the Hulu and NBC partnership and all the other announcements last month was news that Alexa will begin to make proactive notifications for users. Called hunches, they are currently focused on the smart home — such as offering a reminder if you forget to turn off a light when you go to bed. But hunches for TV shows or content could be amazing and really change the way people think of devices like the Echo Show.

Another great addition to the visual experience for Alexa is the Alexa Presentation Language (APL), which will give Alexa skills developers the opportunity to include more visual content in voice apps.

The Echo Show and its competitors in the visual smart speaker space have always offered ways to help people cook, and the Echo Show is now better at guiding people through a recipe step by step.

Ways to close the loop on what Amazon wants to accomplish by helping people cook dinner might be offering Dash Replenishment or a quick way to add a recipe to your shopping list or Whole Foods cart.

Those features are not available today, but I can’t imagine they’re far off.

It would also be nice to be able to add ingredients to your shopping list by pressing a single button.

In the hands-on review VentureBeat published last month after the Echo Show made its debut in Seattle, we suggested that you can use a new feature to add multiple items to your shopping list. While great in theory, it turns out that’s not so simple in practice, as it maxes out around five or six items. It’s still helpful, but it can‘t quickly add all the necessary items to your shopping list in one go.

Evolving a visual interface for a hands-free experience

By virtue of being Amazon’s chief visual offering with Alexa, the Echo Show is a sort of standard bearer for the emerging field of hands-free products that deploy AI services. The first-generation Echo Show was not really up to this title, but the second-generation Echo Show has a series of additions that make it a more thoughtful, easier to use device, with new video choices to explore.

This version of Echo Show appears to be the answer to lessons learned from feedback the first time around.

Show Mode for devices like the Fire 8 or Fire 10 tablets means that the visual interface available in the Echo Show won’t be totally exclusive, but with changes imposed on the second-generation Echo Show, there’s a lot to enjoy and appreciate about the new device.