Argo.ai, a Pittsburgh, Pennsylvania-based driverless car startup founded by former executives from Google’s and Uber’s autonomous technology divisions, today unveiled its third-generation test vehicle: a modified Ford Fusion Hybrid. It boasts mechanical, sensing, compute, and software upgrades and replaces the fleet currently on the road in Miami; Washington, D.C.; Pittsburgh; and Palo Alto. Argo says the first few cars are already cruising around neighborhoods the second-gen models previously operated in, including in Michigan, where the company has expanded testing from Detroit to Dearborn, Corktown, and sections of downtown around Campus Martinus.

In a forthcoming blog post on Medium, former Uber engineering lead and Argo AI president Peter Rander explains that the cars, which are outfitted with tech that’s “a step closer” to production specifications and which are designed to drive safely in a variety of conditions, are equipped with a “significantly” upgraded sensor suite. They sport new sets of radar and cameras with higher resolutions and wider dynamic ranges, along with a new computing system that affords more processing power than Argo’s previous cars and an improved thermal management system that minimizes in-vehicle heat and noise.

With respect to safety, Rander says the engineering team has “gone to great lengths” to ensure the Fusion Hybrids operate predictably in the event something goes wrong. To this end, Argo AI’s cars now feature redundant braking and steering systems that maintain motion control if one unit stops functioning and that detect faults such that the cars’ ability to stop or pull over as needed is preserved.

“When trying to see an object that’s very far away, a lower-resolution camera may only be able to represent it as a pixel or two, [b]ut with higher resolution, you may be able to get a dozen pixels out of the same faraway object,” wrote Rander. “In concert with upgraded software, this means our vehicles are getting better at seeing what’s farther ahead and classifying what it is … That means a smarter vehicle, but also a quieter, more comfortable ride for anyone inside.” 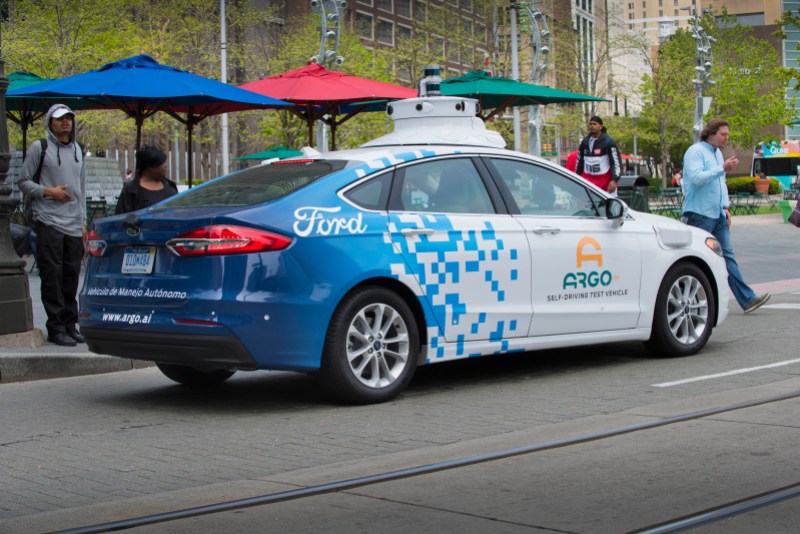 Rander points out that Argo’s Detroit expansion offers an opportunity to test its redesigned vehicles in a range of challenging scenarios, like unmarked lanes, residential streets with narrow two-lane roads and cars parked on either side, overhanging tree branches, and construction zones. “Detroit roads don’t have a singular defining feature,” Rander wrote. “The city and its metro area contain … almost every kind of road you can expect to see.”

This new fleet will consist of approximately 100 vehicles total spread across all testing locations, a spokesperson told VentureBeat. The previous fleet will be decommissioned.

The automaker has reiterated its driverless car ambitions at various points in recent months. Shortly after it set aside $1 billion for Argo, it earmarked a fresh $4 billion in July 2018 for a new unit — Ford Autonomous Vehicles LLC — to house its self-driving vehicle operations, including its autonomous vehicle research, engineering, and systems integration, as well as business strategy and development.

More recently, Ford entered into “exploratory talks” with Volkswagen to jointly develop self-driving vehicles, according to Reuters, and it’s collaborating with partners such as Postmates, Dominos, and Walmart in cities like Miami; Pittsburgh; Detroit; Washington, D.C.; and soon Austin. In May, Ford announced in a press release an exploratory partnership with Agility Robotics to embark on a project that will evaluate the suitability of the former’s Digit — a two-legged robot with a lidar sensor, stereo cameras, and a maximum lifting capacity of 40 pounds — for package delivery.