Dtex differentiates itself in the multi-billion-dollar threat intelligence market with a GDPR-compliant technology called DMAP+ that correlates telemetry, introspection, and predictive modeling to recognize threats based on behavior and patterns. This could help enterprises defend against the recently documented rise in cybercrime, a portion of which appears to have been sparked by the pandemic.

Dtex’s platform — Intercept — offers a view across data, machines, and apps in enterprise environments to highlight blind spots, like misconfigured rules and intentional security bypasses. This is accomplished in part through contextual audit trails surrounding events to enable detection of early warning signs and investigations. Security teams can query hundreds of thousands of endpoints on the fly, taking advantage of anonymization technology that obscures identifying user information (like user names, machine names, and domain names).

IT teams first install Dtex’s platform on their company’s network or in the cloud and on remote, home, and on-premises endpoints. Within a day, the platform begins alerting them to high-risk user activity based on DMAP+’s findings. Within a month, the Dtex platform hones behavioral baselines using a family of self-supervised, unsupervised, and supervised machine learning algorithms to build a better understanding of what anomalous behavior (e.g., accidental or malicious policy violations) looks like for each user. 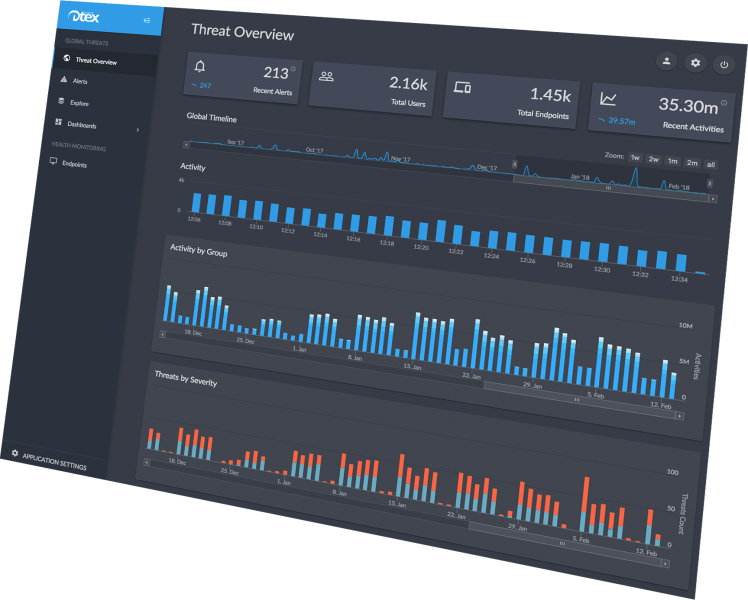 Dtex says its platform — which is actively being used by customers like Williams Formula 1 — collects just 3MB to 4MB of data per user per day, uses less than 0.5% of processor cycles, and plays nicely with existing monitoring solutions across platforms such as Windows, macOS, Linux, and virtual environments.

Northgate Capital led this latest funding round, with participation from existing investors Norwest Venture Partners and Four Rivers Group. The round brings San Jose, California-based Dtex’s total raised to roughly $57.5 million, following a year in which it doubled revenues. Dtex says that in 2019, 80% of its Fortune 500 customers increased their deployments to cover all endpoints, including servers.

Competition is fiercer than ever in the cybersecurity segment. Players include IntSights, TrapX Security, CybelAngel, and Deep Instinct, all of which take an algorithmic approach to threat detection. That’s not to mention San Francisco-based ZecOps, which recently nabbed $10.2 million for its tech that automates analysis and response to cyberattacks; Trinity Cyber, whose threat-combating suite combines detection with “adversary inference;” and Huntress, which brought in $18 million to detect and remediate cyberthreats. Not be outdone, Lacework protects cloud environments from data breaches.