Facebook’s AI team has been extra thirsty for robotics lately. Over the course of the past year, Facebook has expanded its robotics operations around the world and taught hexapod robots to walk. Last week, Facebook AI released the Replica photorealistic training data set and Habitat, a simulation engine for embodied AI, like robots.

At launch, PyRobot can support Sawyer robots and LoCoBot, a robot used for Robot Autonomy courses at Carnegie Mellon. Support for additional machines like UR5 from Universal Robots and Franka is coming soon, and integration with simulators like MuJoCo and Habitat is also in the works.

“We believe PyRobot, combined with the recently released LoCoBot robot, will reduce both the financial cost and development time — leading to democratization of data-driven robotics. The hardware-independent API will lead to development of code and datasets that can be shared across the community,” researchers said in a paper published Wednesday on arXiv.

PyRobot is designed to help researchers and tinkerers get started with a robot in a matter of hours. Facebook wants PyRobot to quicken robotics adoption and grow the robotics research ecosystem by giving the AI community a common API for sharing code, data sets, and models. To get started, the framework launches with pretrained models for navigation, grasping, and pushing algorithms. 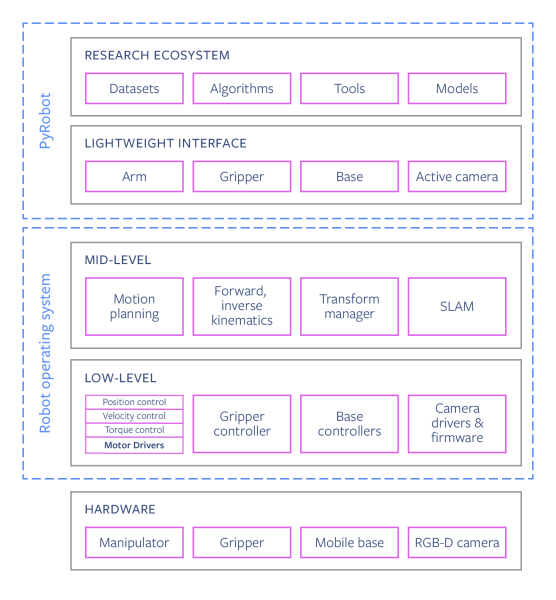 In some initial projects with PyRobot, the framework has simplified testing of sim2real transfer of policies for end-effector control, and point-goal navigation, researchers said.

Like Amazon’s RoboMaker, PyRobot works as an interface atop the Robot Operating System (ROS). Microsoft released  a robotics toolkit in limited preview in May and integrated ROS into Windows 10 last year.

PyRobot is the latest Python-based offering from Facebook. In addition to deep learning framework PyTorch, the company introduced PyTorch Hub earlier this month to encourage reproducibility of AI models.