When reached for comment, a Facebook spokesperson said they’re working to remove bots in violation of Messenger platform community standards.

“Featured bots are surfaced by a combination of algorithms that detect the most highly engaged bots along with some curation from our team to surface new and interesting experiences,” Facebook said in a statement shared with VentureBeat. “When a bot or its content is found to violate our Community Standards, it is immediately removed from the platform and in this case, the bot appeared as a result of the algorithm. We have reviewed our current featured bots and are in the process of/have removed any that are found to be in violation from our platform and will continue to monitor for any additional instances.”

Each of the bots, with names like Naveira Rana and Ghulam Fatima, appear to be created with Chatfuel‘s simple bot maker. Send them a message and you won’t hear back for a while, but when you do you’ll get a link to pornographic image with a play button on top of it. They look like videos but end up being clickbait. 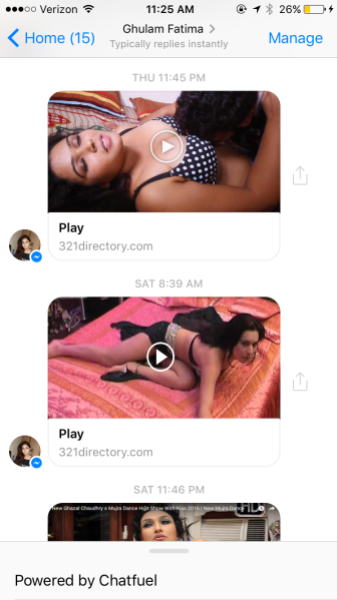 The bots were first brought to VentureBeat’s attention by Shane Gau, founder of Qwazou, who said he began to see the bots in the featured area of Messenger about a month ago. Gau said he regularly peruses the bot recommendation drawer in order to surface cool new bots. In addition to clickbait, Gau said bots featured by Messenger have sent him actual pornographic videos; however, all bots VentureBeat interacted with directed all mouse clicks to a marketing website.

“There has been a lot of talk about how bots have never really met their hype. I am not sure how including pornographic bots in the bot recommendation drawer in Messenger is helping the bot cause for the rest of us bot developers,” Gau told VentureBeat in an email.

Gau said he first began to notice and report the bots about a month ago, and called the appearance of bots like Aisha Khan in the recommendation area representative of larger problems in the Messenger bot ecosystem.

“Candidly, there is usually a bunch of useless bots in there [the drawer], which begs the question as to whether Facebook wants bots to be successful or not,” he said.

Despite being a big fan of bots, Gau said his biggest disappointment wasn’t the poor performance of the Messenger platform.

Apart from tens of thousands of bots made by third parties is Facebook’s own intelligent assistant M. A source familiar with the matter recently informed The Information that 70 percent of activity by intelligent assistant M require human intervention. Since last fall, bots have been battered between great optimism and claims they lack value or are overhyped.

“I think the problem was that it got really overhyped very, very quickly, and the basic capabilities that we provided at that time weren’t good enough to replace traditional app interfaces and experiences, and so what we’ve done in the past couple of months is we’ve invested and built more capabilities,” Messenger VP David Marcus said onstage at TechCrunch Disrupt in September 2016.

Since the launch of bots on Messenger at F8 roughly one year ago, several features have been added to the Messenger platform, including menus, cards, buttons, and a payments beta.

Announcements about the future of Messenger are anticipated at Facebook’s developer conference F8, set to take place April 18-19.