Fantastical future visions from the early 20th century foresaw a time when silver jumpsuits, flying cars, and robotic assistants would be commonplace. Fast-forward 100 years or so, and while glitzy one-piece garments aren’t really showing signs of going mainstream, there is some evidence to suggest urban airborn transport and personal robots are on the cusp of becoming reality, though not without a few hiccups.

Against this backdrop Piaggio, the Italian motor vehicle maker best known for Vespa scooters, today announced that it’s preparing to launch its first consumer robot — one that follows its owner around with their belongings in tow.

By way of a quick recap, Piaggio established a Boston-based offshoot called Piaggio Fast Forward (PFF) back in 2015, and two years later PFF offered a glimpse of its first products: small and large autonomous robots, called Gita and Kilo, respectively. Piaggio has spent time refining Gita ahead of today’s official unveiling — and the company has confirmed that the robot will be available to buy on November 18, 2019 for $3,250.

“The Gita robot is a fundamental step toward the future of mobility for Piaggio Group,” said PFF chair Michele Colaninno. “Our objective is to create an innovative consumer product that is efficient and easy to use while also enhancing daily life.”

It’s not clear whether Kilo will receive a launch date at a later time or whether that project has been canned completely — a company spokesperson told VentureBeat that its entire focus is on Gita for now.

Front-facing cameras allow Gita to “see” the environment around it. 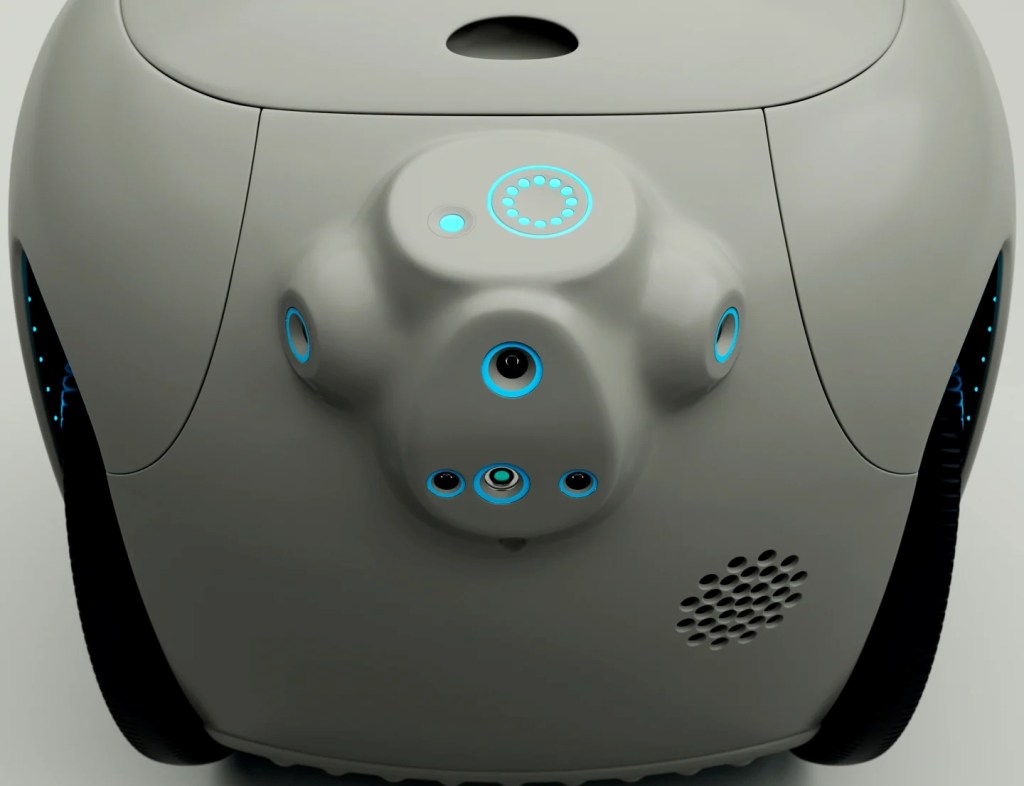 Able to travel at up to 6 miles per hour, Gita pairs with its owner using its on-board cameras and sensors to analyze their shape and size so it knows who to follow. It also recognizes other human shapes so it can move around them and continue following the correct person.

Piaggio is quick to note that Gita doesn’t record any photos or videos and that the camera is purely for analyzing its immediate environment. Although some would argue that Gita is very much autonomous, insofar as it moves without direct human control, Piaggio doesn’t consider the vehicle to be autonomous because it’s tied to the movements of the person it’s paired to.

Gita’s main use case seems to be traveling outdoors with its owner (though it also works indoors) while carrying their belongings — gym gear, baby accessories, a skateboard, and so on. To that end, it can hold up to 40 pounds. 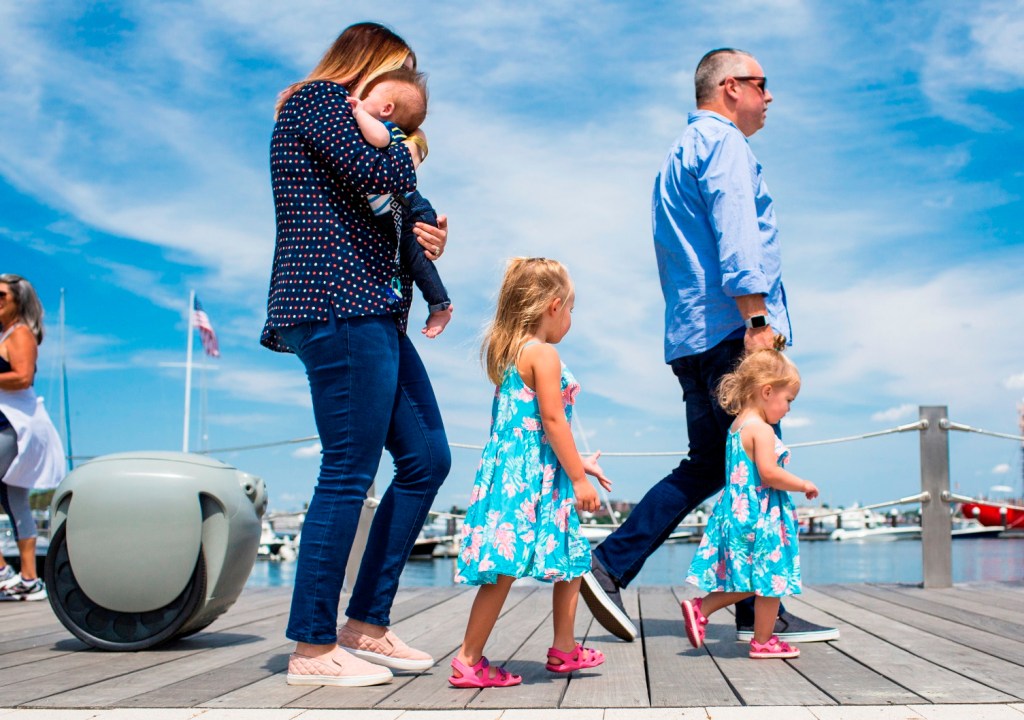 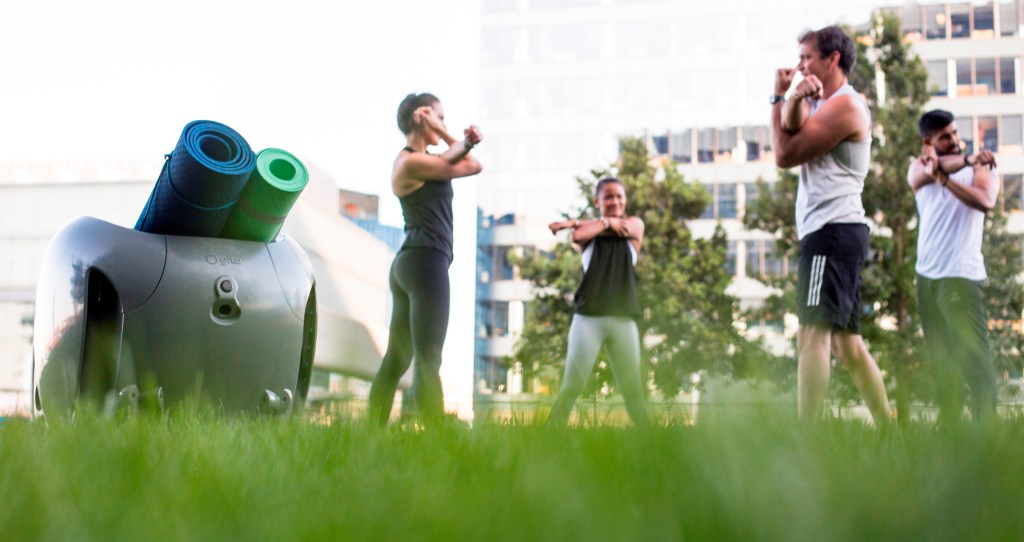 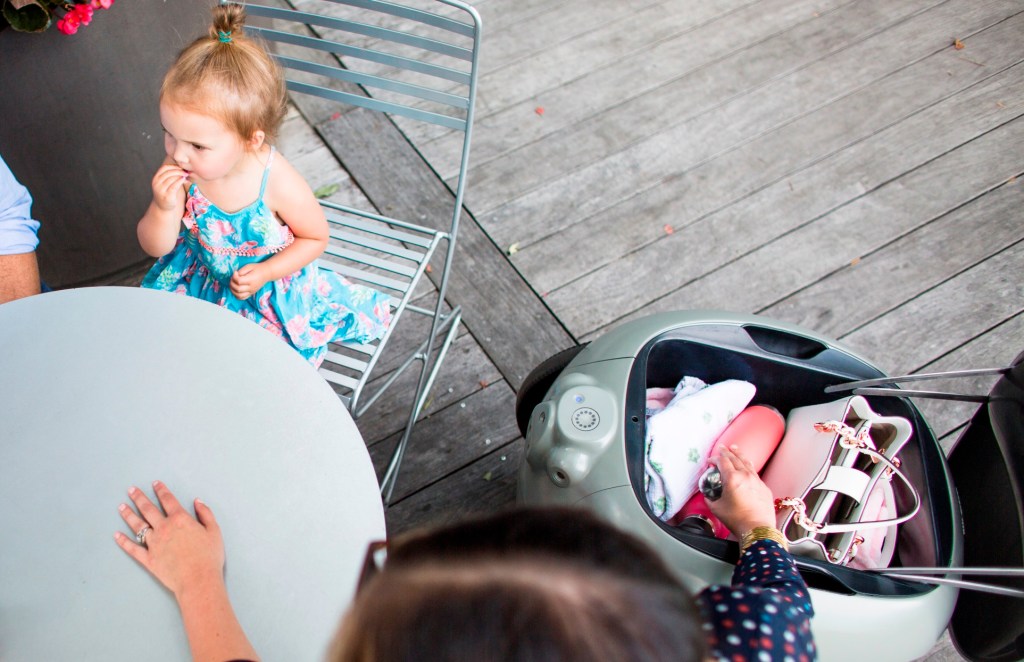 Gita can be powered through a normal wall outlet and charges from flat in two hours — after which it will run continuously for four hours. In other words, you couldn’t rely on Gita for a day trip.

In terms of operating Gita, well, it can’t talk or understand verbal commands. Instead, it communicates through sounds coordinated with a color-coded light system that informs the owner of its current state, such as whether it’s powered up and ready to pair, as well as conveying information about its battery level.

There’s an accompanying mobile app, available for iOS and Android, which is not strictly necessary for basic functionality but offers users another option for locking and unlocking the cargo lid and also enables them to hand off access to others, and even to stream music — yes, Gita has a built-in Bluetooth speaker.

Gita won’t be the first sidewalk-traversing robot to hit the public market — Amazon and a number of food-delivery companies are using similar vehicles to transport goods to customers. But PFF is hoping to throw a new candidate into the urban mobility ring, which includes everything from electric scooters to bike-sharing programs.

“PFF was founded to create lifestyle-transforming mobility solutions, allowing people to move with greater freedom in their neighborhoods,” said PFF cofounder and CEO Greg Lynn. “With the Gita robot, our first product, we’re thrilled to see that vision come to life. From students to working professionals, new parents to grandparents, Gita empowers people of all ages to more actively enjoy their surroundings and to interact with their communities in a more meaningful way.”

In truth, $3,250 is a fairly insane amount of money when you consider the robot’s intended use cases and inherent limitations. Gita is only designed to work on solid terrain, such as paths and sidewalks, meaning that it will not run on mud, tall grass, sand, or snow. It also can’t climb stairs and is limited to slopes with a gradient of 16% (which actually should be fine for most cities). And although it should be alright in most rainfall scenarios, the company warns that the lid isn’t watertight — so you might want to be careful with objects that could be damaged by water.

Moreover, Gita on its own weighs 50 pounds — which rises to 90 pounds when filled to its maximum weight capacity — so you can’t easily pick it up if you encounter a flight of stairs or a muddy patch of grass. There are, however, a couple of handles inside the robot for moments when it needs to be picked up and put in a car, for example.

On the surface, Gita seems a very expensive folly for those unwilling to carry their own belongings in a bag. However, it could prove useful for anyone unable to carry heavier items, either due to a disability or because their hands are otherwise engaged with carrying children, for example. PFF’s official line on how it expects Gita to improve people’s lives is that it helps them prioritize “healthy activity and social interaction.” It seems Gita is being pitched as a tool that allows people to lock their devices away and free themselves for more meaningful real-world interactions.

“PFF may be a robotics company, but we’re focused on revitalizing everyday human movement and social interconnections,” added Jeffrey Schnapp, cofounder and chief visionary officer at PFF. “By prioritizing healthy activity and social interaction, PFF is carving out a new category within the field of robotics: technology that moves the way people move and that augments human experiences rather than replacing or stifling them. With Gita in tow, people are free to put down their screens, get moving, and reconnect with the truly precious ‘cargo’ that shapes their lives: their partners, kids, and friends.”

Whether people really would use Gita as a way to self-regulate their screen usage isn’t clear, but it has certainly been designed with that use case in mind — inside is a charging port for phones and other electronics.

However you want to use Gita, it will be available to buy from November 18, though the company will be opening up an early-access option for anyone looking to get their order in early.