Headstart, a platform that leverages data science to help companies reduce unconscious bias in the hiring process, has raised $7 million in a seed round of funding led by AI-focused Silicon Valley VC firm FoundersX, with participation from Founders Factory.

Launched out of London in 2017, Headstart is one of a growing number of startups promising to help companies increase their diversity during recruitment drives. This is achieved through combining machine learning with myriad data sources to find the best candidates based on specific objective criteria.

“The machine — the algorithms and models — does this without emotion; fatigue; or overt subjective, conscious, or subconscious opinion or feeling. Unlike a human,” Headstart cofounder and chair Nicholas Shekerdemian told VentureBeat.

Headstart first taps information from its client companies, including the job description, current employee data (such as CVs, education, and psychometric data). This internal data is then reviewed for built-in bias, so any clear leaning toward a specific demographic can be addressed in subsequent hiring campaigns. The Headstart platform also gathers and analyzes publicly available data from across the web, including job descriptions and roles, as well as demographic and social-oriented data like school league tables and free school meals data.

“We use this data to determine if any individual has had any obvious social disadvantage and [has] possibly outperformed their social norm group,” Shekerdemian added.

Then, of course, is the all-important candidate data, which is garnered at the point an individual applies for an advertised position online. Headstart’s technology essentially sits behind the “apply” button on their clients’ digital properties, and at this point companies are given the best matches based on data gleaned from the applicant’s CV, psychometric assessments, and any other tools that are used through the screening process. “[This] allows us to evaluate each candidate algorithmically, with a 360-[degree] picture of their suitability, ensuring everyone has a fair experience,” Shekerdemian added. 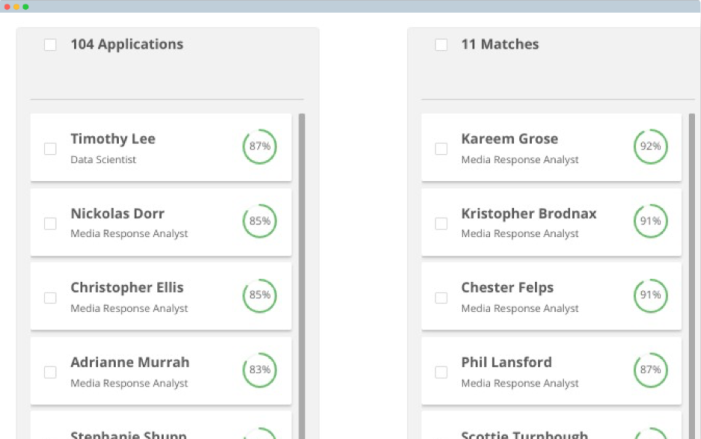 Above: Headstart: Speedy, automated applicant screening based on objective criteria

The startup already claims some big-name clients, including financial services giant Lazard and Accenture, which Headstart said saw a 5% increase in female hires and 2.5% increase in black and ethnic minority hires after using its platform.

It is worth noting that reducing bias is only part of the selling point here. More broadly, the Headstart platform is designed to expedite candidate screening, ensure that each application is considered equally, and reduce the time to hire by up to 70%.

Additionally, Headstart can give companies deep insights into their hiring practices so they can measure existing biases and see how they evolve over time, as well as establishing at which stage in the interview process specific applicant types drop off. 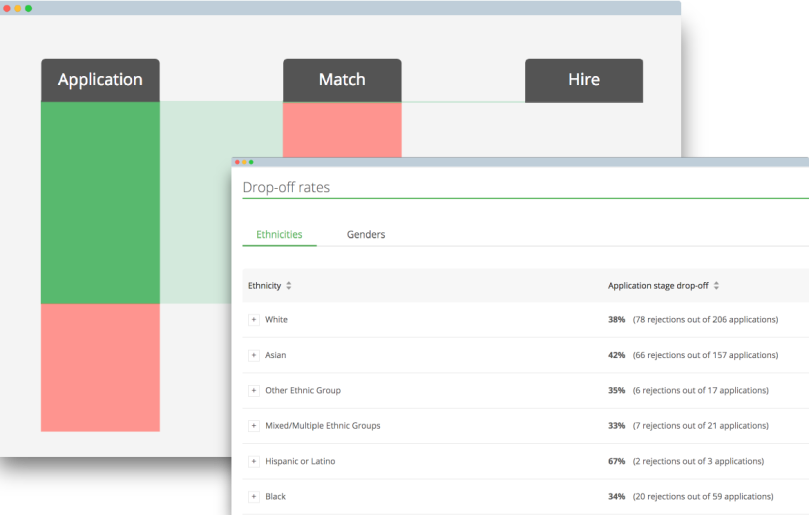 Headstart had previously raised $500,000, and a further $120,000 as a graduate of Y Combinator. With another $7 million in the bank, it is now looking to expand internationally — an endeavor that is already underway, given that Accenture has signed a deal to use the Headstart platform in other markets around the world.

“When we came to market two years ago, we were probably the only technology company talking about fairness and diversity,” said Headstart CEO Gareth Jones. “For me, this represents an investment in diversity, not just our company. This latest round will allow us to grow our capability in our core markets, leveling the playing field and breaking the cycle of exclusion that is still chronically prevalent in the world of work.”

There are numerous other startups leveraging AI and automation to streamline the recruitment process, such as New York-based Fetcher, which uses similar data-crunching techniques to proactively headhunt new candidates, and Pymetrics, which leverages AI as part of its standalone platform for companies carrying out assessments based on neuroscience games.

But Headstart is pitching its technology as the underlying data architecture that “amalgamates candidate information and interprets it algorithmically,” according to Shekerdemian. “Our USP is the ability to take all of this data, and rather than just returning a pass/fail or yes/no, we can score them with a percentage suitability as a blend of all of our data inputs.”

Although algorithms can remove some human bias from many traditional admin processes, we have seen a growing number of scenarios in which the algorithms themselves demonstrate biases — humans, after all, create the algorithms. By way of example, just last week news emerged that Goldman Sachs was to be investigated over alleged gender discrimination regarding credit limits issued in relation to Apple Card.

Ultimately, it’s much harder for an algorithm to explain why it arrived at a certain decision than it would be for a human calling the shots. This is why much of the argument today seems to hang on which option is better — biased algorithms that can’t explain themselves or biased humans who can at least provide some rationale for their decision.

Elsewhere, Amazon previously scrapped an AI-powered recruitment tool it had been working on, specifically because it was biased against women. The experimental tool was trained to vet applications for technical roles by observing patterns in successful resumes dating back a decade; however most of those applications had come from men. So, in effect, Amazon had been teaching its machine learning system to favor male candidates.

Specific to Headstart, it’s worth stressing that candidates aren’t actually hired by machines — humans make all the final decisions. It’s merely a vetting tool that helps remove some bias — up to 20%, according to Headstart — while also speeding up the recruitment process.

“There is a lot of concern around technology and its ability to remove bias,” Shekerdemian said. “And rightly so. Yet we talk about it as though the human recruitment selection process is pure, robust, and bias-free. It isn’t. It’s chronically biased.”

This human bias is compounded when a particular job receives hundreds — or even thousands — of applications and it falls on one or two people to sift through the applications. If there is one thing that algorithms can’t be accused of, it’s of being easily exhausted or lazy.

“The technology, used appropriately, can expose and largely eliminate this bias,” Shekerdemian continued, “simply because it doesn’t get to the 50th CV it’s seen that day and then skip through the next 100 because they are tired and need to get a shortlist to the hiring manager and a bunch of the first 50 were ‘good enough.'”

Shekerdemian concedes that meshing machine learning with data crunching isn’t perfect, but it does address many of the inherent problems that dog the exhaustive, resource-intensive hiring process. And it should improve over time.

“The machine doesn’t consider the candidate’s name and, subconsciously, degrade that applicant’s value because of unconscious bias toward ethnic origin or gender,” Shekerdemian added. “Does that mean the machine is perfect? No. Creating a reliable data model and algorithm is an iterative process. It takes time to train, execute, review, and retrain the models in order to improve accuracy. And to flag things that could lead to bias — such as criteria that might lead the model to favor a particular gender type, for example, as happened in the Amazon case.”