Samsung today announced its AI assistant Bixby will begin to incorporate Viv Labs technology for third-party integrations. Viv was acquired by Samsung a year ago for about $215 million. Before Viv, co-creators Adam Cheyer and Dag Kittlaus also made Siri before it was acquired by Apple.

“Bixby 2.0 will be available on a variety of devices including Samsung Smart TV and Family Hub refrigerator,” Samsung said in a statement shared with VentureBeat. “Bixby 2.0 will introduce deep linking capabilities, and enhanced natural language abilities — to better recognize individual users, and create a predictive, personalized experience that better anticipate their needs.”

Today Bixby responds to commands like “Open Camera and take a selfie” or “Open Facebook and post a recommendation,” but is only able to interact with a handful of apps and services.

As Viv has shown in previous demonstrations, Bixby with Viv will mean the assistant is able to answer more complex questions and interact with more services, so if you say “Send Adam $20 bucks for the drink last night” or “Give me a nice room in Palm Springs for Labor Day weekend,” Bixby will understand what that means and help you complete each task without the need to speak with a human.

As part of Bixby 2.0, a software development kit (SDK) will be made available so the AI assistant can be incorporated into more products. At first the SDK will only be available to select developers in private beta, and made generally available next year, Samsung VP Dag Kittlaus said. SDKs for Google Assistant and Alexa have already been used for control of devices ranging from dishwashers to televisions to home robots.

Samsung also today unveiled Project Ambience, a prototype dongle with a chip and microphone inside that can be added to devices like speakers or TVs for quick access to Bixby assistant to do things like play music, set reminders, or control smart home devices. Other assistants like Baidu’s DuerOS and Amazon’s Alexa have also made chipsets available for developers to integrate their AI assistants into products.

“These inexpensive dongles can be placed anywhere,” CTO Injong Rhee said onstage today at the Samsung Developer Conference today at Moscone West Convention Center in San Francisco. “This means you can turn your home into an intelligent home at a lower cost. In contrast todays AI speakers use expensive far-field microphone array technologies.” 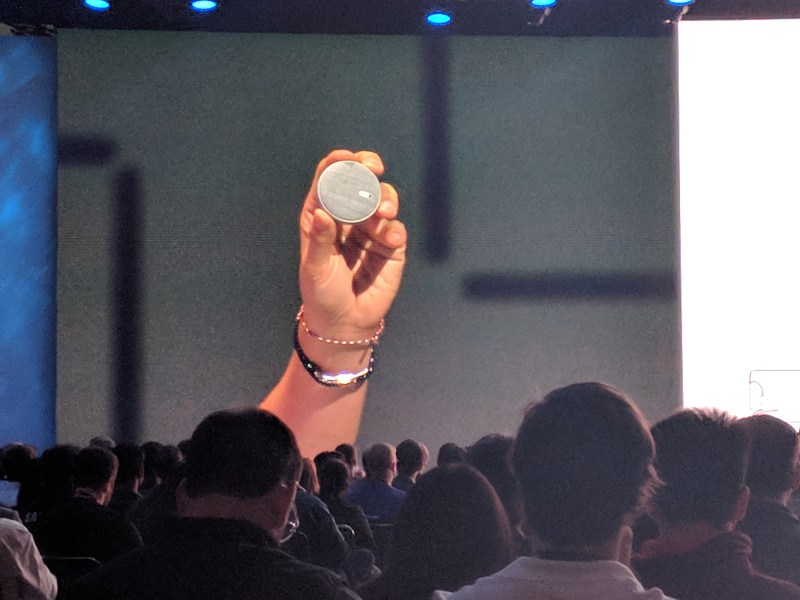 Above: Project Ambiance prototype is held up by Samsung CTO Injong Rhee

No date has been set for the release of Project Ambiance dongles, Rhee said.

Samsung also announced today that it will combine its IoT services like SmartThings, Samsung Connect, and Artik, into a single service called SmartThings Cloud. Samsung’s large line of smart home appliances can do things from tell you when a load of dishes has finished or if a camera detects movement.

“With this important step our IoT cloud service will merge into a single SmartThings Cloud. Over time all our IoT devices will become SmartThings compatible and gradually all Samsung devices from smartphones to TVs to refrigerators will offer a seamless interface and service,” Samsung president DJ Koh said onstage.

Finally, to beef up augmented reality offerings, Samsung will begin to allow developers to use Google’s ARCore SDK to create AR experiences, beginning with Samsung Galaxy S8, and later for Galaxy Note8, Galaxy S8+, and other Samsung devices.

Bixby is able to do many of the things people have come to expect from their intelligent assistant such as play music or send messages, but got off to a rocky start this spring. Bixby first launched in Korean, and after initially being scheduled for release in English in March with S8 and S8+ phones, Bixby Voice did not come to English-speaking customers until this summer, and still has ground to make up among major competitors like Cortana, Siri, and Alexa.

After delays and disappointments, the Viv integration brings Bixby closer to the completeness promised to users at launch.

Bixby is currently available in 200 countries but only in Korean and English.