Sony might not be a smartphone hitmaker like rivals Samsung, Google, or LG (at least in the U.S.), but it’s nothing if not persistent. The company’s latest attempt to nab a market foothold is the Xperia 1, which was announced in February at Mobile World Congress in Barcelona. Among its spotlight features are an ultrawide screen designed to highlight movies and TV shows shot in anthromorphic widescreen and a triple rear camera setup paired with a powerful camera app that borrows tech from Sony’s CineAlta group.

So, what’s the verdict?

Minimalism is Sony’s aesthetic du jour, and the Xperia 1 falls right in line. Its front and back glass run parallel, curving at the edges toward the lip of the phone’s frame, and noticeable (but not inordinately large) bezels buffer the display’s top and bottom, flanking narrower borders to the left and right. 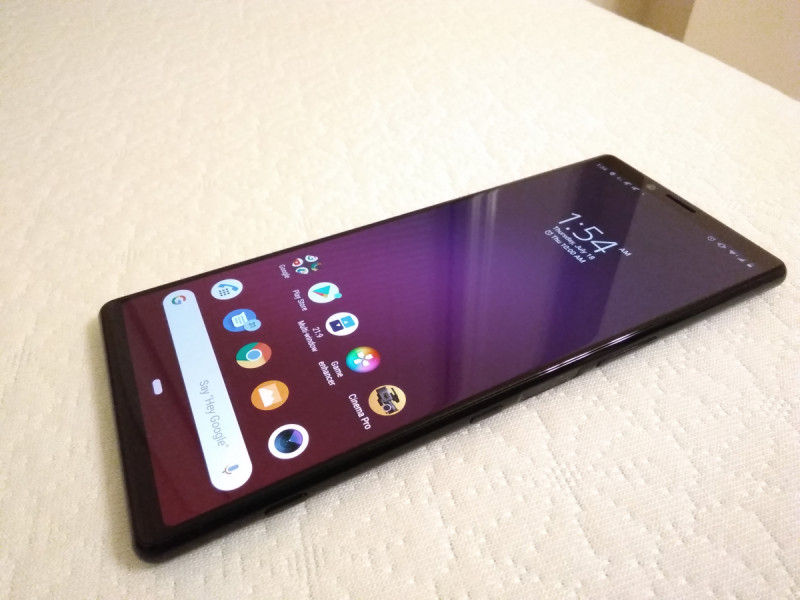 The Xperia 1’s left side houses the volume rocker and power button, which sandwich the fingerprint sensor. The trio sits up from a dedicated shutter key that doubles as a shortcut to the camera app, a layout that was a constant source of frustration in my testing. Sony’s decision not to pair the fingerprint sensor with the power button (like the Samsung Galaxy S10e) is to the Xperia 1’s detriment — it’s far too easy to nudge either with a wayward thumb.

You won’t find a 3.5mm audio jack in the Xperia 1, which is par for the course — neither the Xperia XZ3 nor the Xperia XZ2 had analog ports onboard. Fortunately, there’s a USB-C-to-3.5mm adapter in the box.

The Xperia 1’s 6.57-inch screen bears the distinction of being the world’s first 4K HDR OLED on a phone — one with an ultra-wide 21:9 aspect ratio, the same designed to show films shot in CinemaScope and the modern anamorphic format 2.29:1. As with Xperia displays before it, the 1644 x 3840 resolution (643 pixels per inch) display draws on Sony’s Bravia TV technologies for “improved” contrast, color, and clarity and support for the DCI-P3, IT-R BT.2020, and Illuminant D65 color spaces.

It’s plenty bright indoors but tough to make out in direct sunlight or at an angle, where distortion rears its ugly head. Perhaps more disappointingly, only compatible content displays in 4K — the Xperia 1’s user interface is at 420 pixels per inch by default. 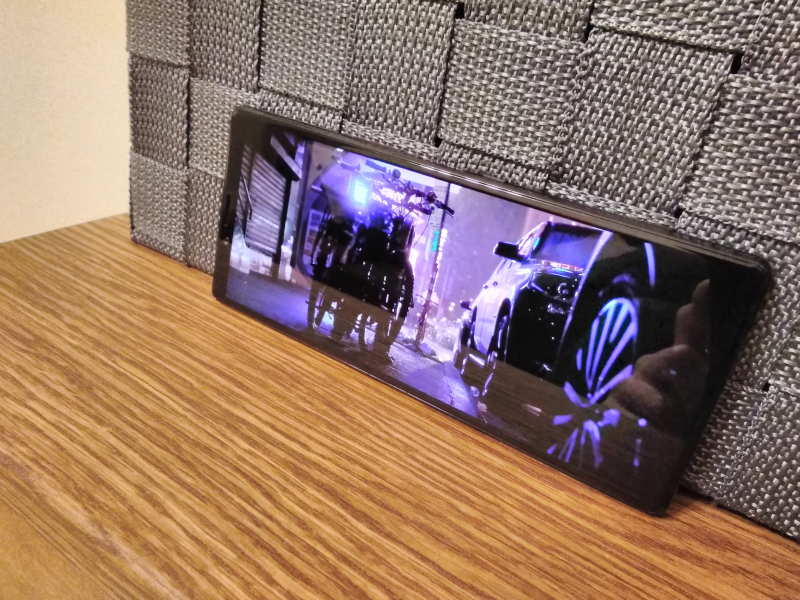 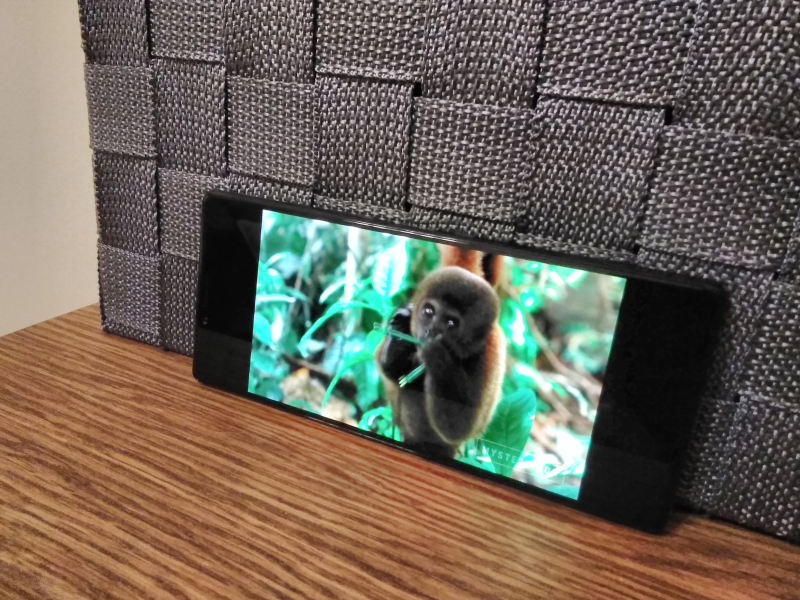 So what’s the big deal with 21:9? Well, Sony Mobile says it’s collaborating with Sony Pictures Entertainment to bring films and TV shows shot in native 2.29:1 to the Xperia 1 without letterboxing (the black bars that fill out content that’s been squeezed into a 16:9 screen). Moreover, the company says it’s in talks with game developers such as Epic Games, Gameloft, and Tencent to optimize titles like Fortnite, Asphalt 9, and Arena Valor for the added real estate.

Trouble is, the gain is largely hypothetical. You’re currently on your own where content discovery is concerned. It’s by no means difficult to find 2.29:1 movies and shows — a cursory search of YouTube and Netflix yields plenty — but given that one of the Xperia 1’s selling points is its ultrawide aspect ratio, the dearth of curation is more than a little surprising.

The Xperia 1’s other headliners are the cameras, without a doubt. Sony is finally jumping on the three-sensor bandwagon, following in the footsteps of Huawei, LG, Samsung, and others. They produce good — and sometimes great — photos in bright and low light in spite of the default settings’ skew toward warmer hues. Colors are rarely oversaturated, shadows retain both details and sharpness, and the camera app’s intelligent auto mode (which leverages AI to tune its output to scenes) cuts down on noise that would otherwise creep into closeups.

The same can’t be said of the 1/4-inch 8-megapixel sensor (with an f/2.0 lens) front-facing camera, which snaps average selfies at best. Particularly disappointing are the overzealous “beautification” sliders in portrait selfie mode, which turn skin into a pasty mess.

There’s an abundance of tools of varying usefulness on tap in the Xperia 1’s camera app. In addition to the aforementioned portrait selfie mode, which has adjustable sliders that slim your cheeks and enlarge your eyes, you’ll find a bokeh option that uses computer vision to approximate depth of field. They complement object tracking and an auto capturing feature that snaps a pic when it detects a smile, plus filters like Mirror and Old Film and an augmented reality stickers mode akin to Google’s AR Stickers. 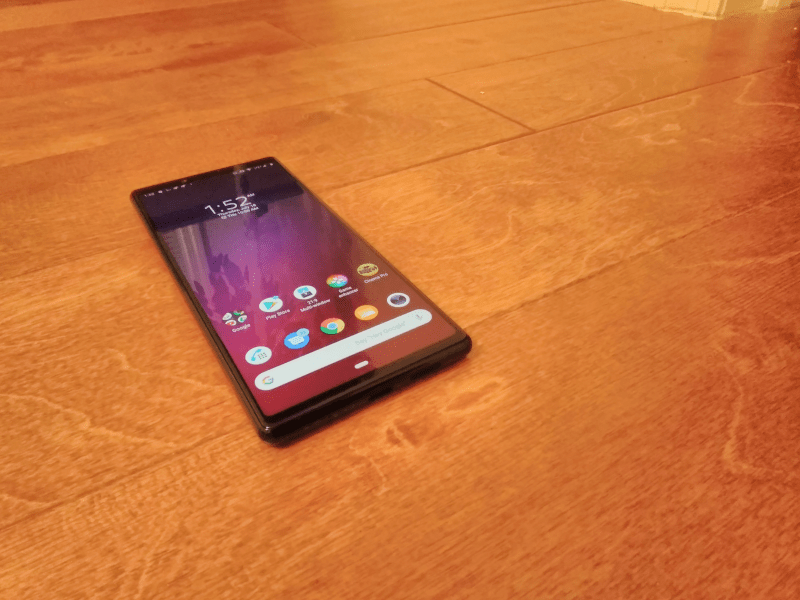 Of note is Eye AF, which leverages machine learning to lock onto a subject’s eyes and “remember” them so it can relock focus when they briefly move out of the frame or are occluded by an object. Sony is also touting Cinema Pro, a highly customizable capture mode designed in collaboration with the company’s CineAlta division. Both work as advertised, but it would be nice if Cinema Pro didn’t disable optical image stabilization.

At the heart of the Xperia 1 is the system-on-chip (SoC) inside the Samsung Galaxy S10 series: Qualcomm’s Snapdragon 855. It’s a substantial step up from the Xperia XZ3’s Snapdragon 845, and Sony’s flagship makes the most of it. 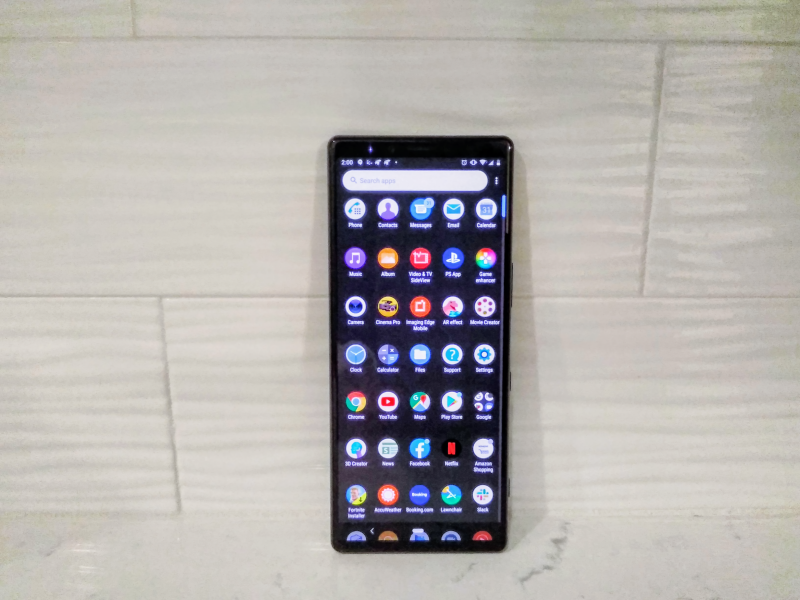 The Xperia 1 impresses qualitatively with zippy transitions and stutter-free multitasking, and it’s no more a slouch in synthetic benchmark tests. It achieves a 10,846 multi-core score in Geekbench 4, putting it on par with the Galaxy S10 (10,559), just behind the OnePlus 7 Pro (11,012) and far ahead of long-in-the-tooth handsets like the LG V40, Vivo Nex S, Galaxy S9, Galaxy Note9, and LG G7.

But what about the battery? While the Xperia 1 might be deficient on paper compared with titleholders like the Vivo Nex or the Motorola G8 Plus, raw capacity numbers belie its stamina. The phone’s 3,330mAh pack easily lasts morning to night with light usage, which in my case involves a mix of web browsing, Google Maps navigation, Gmail, and YouTube.

As with previous handsets in the Sony’s Xperia family, audio is front and center on the Xperia 1. It boasts stereo speakers driven by a “smart” amplifier (the earpiece doubles as a second channel), and support for both Dolby’s Atmos 3D simulated surround sound technology and Hi-Res audio (recordings with over a 44.1 kHz sample rate and a 16-linear bit depth).

I wish the speakers were something to write home about, but they sadly aren’t. There’s a substantial step down in quality from the bottom-firing speaker to the earpiece, which exhibits the unpleasant clipping characteristic of a blowout. 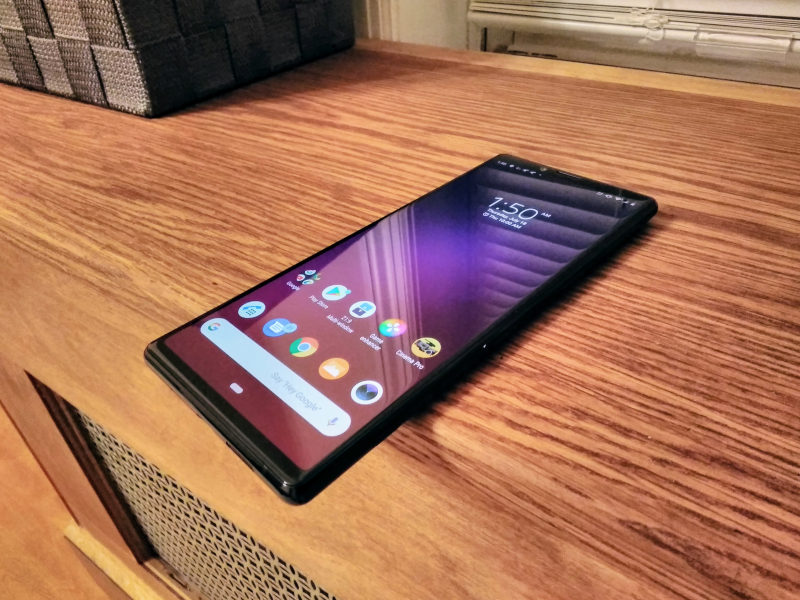 Bassheads might find consolation in the Xperia 1’s Dynamic Vibration feature, which analyzes sound spectrograms and translates them into haptic motor whirs. But while it’s nifty in theory, the implementation is clunkier than you’d expect, considering Dynamic Vibration debuted a year ago on the Xperia XZ2. The effect is surprisingly weak even on the maximum setting and it’s concentrated around the bottom-firing speaker (where the vibration motor’s embedded beneath the display).

The Xperia 1 ships with Android 9.0 Pie onboard, but it’s hardly a vanilla experience. Sony’s Xperia UI sits atop it and brings with it a custom home screen with an iOS-like horizontal app drawer, along with other nips and tucks.

Side Sense, a carryover Xperia XZ3, surfaces a menu containing shortcuts to commonly used apps and settings with a double-tap of the Xperia 1’s right or left bezel. According to Sony, Side Sense’s shortcuts are informed by AI that learns which apps you’re likely to use based on your location, the time of day and day of the week, and other signals. It’s nifty when it works but frustrating when it doesn’t activate right away despite repeated taps, a common occurrence.

The Xperia 1 isn’t a bad phone — in fact, it’s something of a triumph for Sony, whose handsets rarely surpass overall expectations. The screen’s aspect ratio might be a bit of a gimmick, but its vibrancy isn’t, and the triple-sensor cameras capture better-than-expected snaps indoors and out.

It’s the price point that kills this device dead.

$950 is a decent chunk of change no matter how you slice it. It’s $100 more than the exceptional 128GB Samsung Galaxy S10 and the LG G8 ThinQ and a whopping $250 more than the concededly older Google Pixel 3. Sony points to the anamorphic screen and CineAlta enhancements as justification for the premium, but it’s hard to reconcile knowing that smartphones just as capable undercut it by a substantial margin.

Perhaps if the Xperia 1 arrived with a catalog of compelling ultrawide content, things would be different — that would at least set it apart from the crowd. But as it stands now, you’re paying out the wazoo for a little more screen real estate, which doesn’t sound like a great deal to me.