Volvo has announced a commercial first for its electric autonomous trucks.

The Swedish automotive titan has partnered with ferry and logistics giant DFDS to use Volvo Trucks’ “Vera” to transport goods between a logistics hub and a port in Sweden.

By way of a quick recap, Volvo has been ramping up its autonomous trucking efforts over the past few years and has engaged in several pilot projects, including a self-steering truck to help sugarcane farmers in Brazil improve their crop yield and an autonomous garbage collection truck. Back in November, Volvo also revealed its first commercial self-driving trucks would be used in mining, transporting limestone along five kilometers of roads and tunnels from mines to a nearby port.

Last September, however, Volvo debuted a new concept electric autonomous truck called Vera, which is built from the ground up to be autonomous — there is no cab for a driver to sit in — similar to fellow Swedish company Einride, which is also developing a cab-less autonomous truck. But as a long-established automotive brand and one of the world’s largest truck manufacturers, Volvo is now pushing ahead with plans to install its self-driving vehicles in various industries. 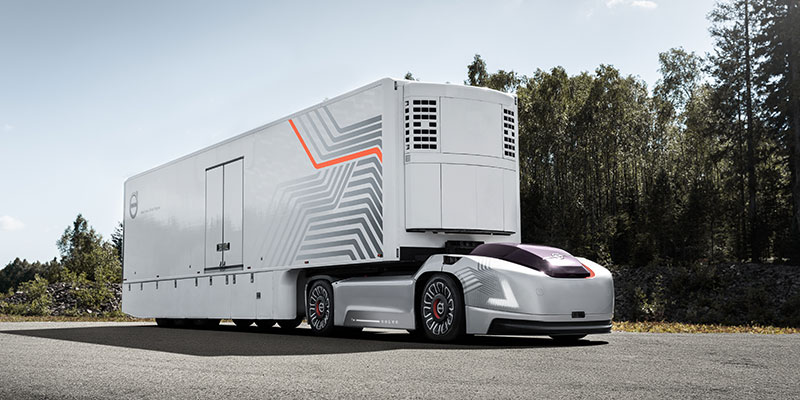 DFDS will use Volvo’s trucks to transport containers on a predefined route along public roads at a maximum speed of 40km (25 miles) per hour. The trucks will be monitored remotely by an operator in a control room.

“We want to be at the forefront of connected, autonomous transportation,” said DFDS CEO Torben Carlsen. “This collaboration will help us develop an efficient, flexible, and sustainable long-term solution for receiving autonomous vehicles arriving at our gates — benefiting our customers, the environment, and our business.”

The partnership won’t bear fruit immediately, as much of the necessary infrastructure is still being developed, including automated gates to permit the trucks’ entry at the port terminal. The full and final rollout could be a few years away.

“Now we have the opportunity to implement Vera in an ideal setting and further develop [its] potential for other similar operations,” added Mikael Karlsson, VP of autonomous solutions at Volvo Trucks.

It’s worth noting that Vera isn’t designed to travel cross country — it’s all about short “repetitive” trips in logistics hubs covering factories, ports, and so on. But it represents a small step forward for autonomous vehicles, which will likely infiltrate society gradually, starting with niche use cases such as those demonstrated by Volvo and DFDS.

“Autonomous transport, with low noise levels and zero exhaust emissions, have an important role to play in the future of logistics and will benefit both business and society,” Karlsson continued. “We see this collaboration as an important start and want to drive progress in this area. Vera may have a speed limit, but we don’t. Testing has already started, and we intend to implement the solution within the coming years.”