Reports emerged back in April that the Redwood City, California-based company was seeking to raise up to $300 million, which we now know was in the ballpark. This round takes Carbon’s total raised to $680 million and follows its $200 million series D raise from 2017, when it claimed a $1.7 billion valuation. Pitchbook estimated earlier this year that Carbon could now be valued at up to $2.5 billion, and we’re told the company has in fact reached a valuation of $2.4 billion with this latest round.

Founded in 2013, Carbon is one of a number of startups developing 3D printing technologies to open up digital manufacturing to more creators and companies. It operates at the intersection of “hardware, software, and materials science,” as the company puts it, with specialized “digital light synthesis” technology that meshes light projection with programmable resins to transform the liquids into solid materials. Moreover, it can create complex, intricate constructions not possible with traditional mold injections, while ensuring the final product is both sturdy and lightweight. 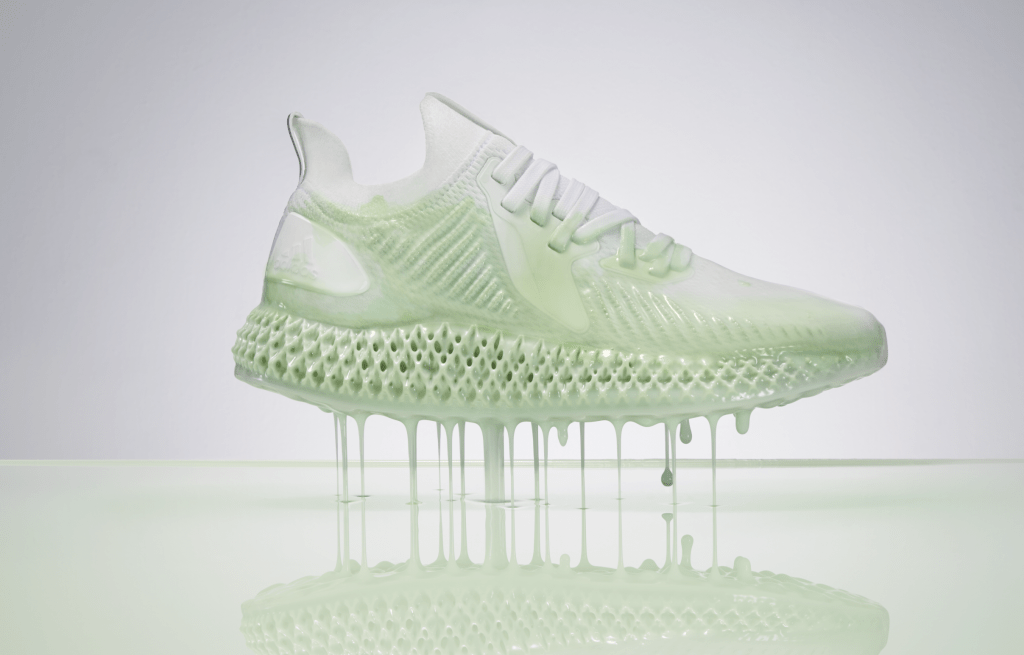 Above: Adidas Alphaedge 4D shoes being made

“Carbon has cracked the code on 3D printing at scale,” noted Sequoia Capital partner Jim Goetz. “They are truly delivering on their vision to provide the world’s first fully integrated digital manufacturing platform for high-volume production, and they are well on their way to transforming the 3D printing world.”

The company hit the headlines back in 2017 when Adidas announced it was mass-producing a 3D-printed shoe courtesy of Carbon’s technology — a product that went to market last year. This explains why Adidas has invested in Carbon’s previous two funding rounds — it’s very much a strategic cash injection.

Above: Futurecraft 4D, from Carbon and Adidas

Elsewhere, Carbon’s technology is being put to use in all manner of industries, including automotive — Ford recently digitally manufactured polymer parts for its F-150 and Mustang vehicles using Carbon, while football equipment maker Riddell tapped Carbon to manufacture next-gen helmet protection.

There are other benefits to this speedy 3D printing technology, which allows manufacturers to offer mass customization of products and on-demand inventory — referred to a zero-inventory manufacturing. In effect, companies can produce goods to match demand, rather than mass-producing millions of items without knowing how much they will actually sell.

“With the Carbon platform, powered by our digital light synthesis technology, companies are finally breaking free of the constraints of traditional polymer manufacturing methods to make what’s next now, and at speeds and volumes never before possible,” said Carbon CEO and cofounder Dr. Joseph DeSimone.

Manufacturing is estimated to be a $12 trillion industry globally, and there has been a broad push to optimize manufacturing processes across the board. Oden Technologies, for example, is setting out to create less wasteful factories using analytics and big data, while Automata is striving to democratize industrial automation with desktop robotic arms.

With another $260 million in the bank, Carbon is now well positioned to grow its platform in existing and new markets in Europe and Asia, and it also plans to accelerate its R&D efforts. This will in part involve setting up an advanced development facility (ADF) that will serve as a “scaled-up manufacturing environment” to support anticipated growth.

“What impresses me about Carbon is their diversification across markets and industries,” added Greg Penner, Walmart chair and founder and general partner at Madrone Capital Partners. “Through their partnerships with large-scale manufacturers in automotive, health care, and consumer goods, they are proving that, with their digital light synthesis technology, additive manufacturing in larger-scale production is becoming a reality across industry sectors.”