Facebook’s $19 billion bet on WhatsApp in 2014, when the messaging app had 450 million active users, is really beginning to pay off. In recent months, WhatsApp has surpassed Facebook’s own marquee app in popularity, according to industry estimates.

In September of last year, WhatsApp for the first time had more monthly active users worldwide on Android and iPhone platforms than Facebook’s eponymous app, research firm App Annie said today in its annual “State of Mobile” report. App Annie did not share specific figures but told VentureBeat that WhatsApp has maintained its lead over the Facebook app since September.

To be sure, the Facebook app was the top app in 2018, with the most active users globally (if we take an average of each month of the year), according to App Annie. But in several markets — including India, Indonesia, the U.K., Turkey, Switzerland, Spain, Singapore, Russia, Netherlands, Mexico, Malaysia, Hong Kong, Germany, Finland, and Brazil — it conceded defeat to WhatsApp even on that front. Interestingly, in the U.S., the Facebook and Messenger apps took the top spots, while WhatsApp did not make the top 10.

A WhatsApp spokesperson declined to comment on App Annie’s findings and said the messaging app won’t be sharing any new figures at the moment.

How many users does WhatsApp have?

A reluctance to share the number of WhatsApp users stands in contrast to the app’s early days, when it used to boast about its user base growth every few months. As the messaging app faces mounting pressure for its role in spreading false information and other questionable content, Facebook seems to have become increasingly reluctant to share WhatsApp’s growth story.

In an earnings call while delivering Q3 2018 results, Facebook CEO Mark Zuckerberg did not break out WhatsApp’s active user base, only sharing the overall reach of all Facebook apps.

In fact, the last time Facebook shared any figures for WhatsApp was during the Q4 2017 earnings call in January of 2018. At the time, Zuckerberg said WhatsApp had 1.5 billion monthly active users. Notably, for the first time in several years, WhatsApp did not share this month how many messages were exchanged through its app on New Year’s Eve. (On a side note, WhatsApp has not shared an update on how many people use its app in India, its largest market, in more than a year and a half.)

App Annie’s figures are somewhat in line with estimates shared by Apptopia. According to the research firm, which published its global app downloads report last month, WhatsApp was downloaded more times than the Facebook app in 2018.

VentureBeat reached out to SensorTower, another research firm that tracks app downloads. According to SensorTower, WhatsApp was indeed the most-downloaded app among other Facebook-owned apps last year. 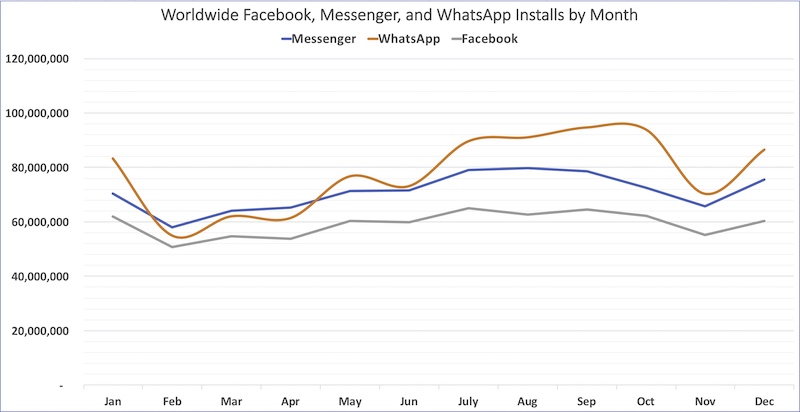 The exponential growth of WhatsApp in recent years has presented unique challenges for Facebook, which makes the vast majority of its revenue by selling ads. WhatsApp remains free of ads for now. Last year, the company launched a version of WhatsApp for business users, but that app is seeing slow adoption, so it remains unclear how much money — if any — Facebook is making from it.

However, it’s only a matter of time before WhatsApp, which has lost both its founders and an executive who played an instrumental role in persuading them to sell the app to Facebook, begins to explore monetization opportunities in the app. At Facebook’s quarterly earnings call later this month, many will be hoping for an update.