Choco, a company that’s setting out to digitalize the global food system with a platform that connects restaurants to the supply chain, has raised $30.2 million in a round of funding led by New York-based hedge fund Coatue Management. Choco said it is now valued at more than $200 million.

Founded out of Berlin in 2018, Choco meshes mobile commerce and messaging into a single platform to help restaurant owners and food suppliers take all their orders and communications online. Choco works with some 10,000 wholesalers and producers globally, helping them create product catalogs to upload to Choco’s platform. Suppliers can elect to receive orders via an online dashboard, email, text, or fax — hinting at the old-school channels still employed by many across the industry. The platform allows suppliers to maintain their internal workflows while making it easier for their buyers to place orders.

“The main objective for Choco is to provide value to suppliers and restaurants while integrating into their workflow as seamlessly as possible,” Choco founder and CEO Daniel Khachab told VentureBeat. “While we offer our own proprietary web and app tool for suppliers to receive orders on and restaurants to send orders on, if they are not yet ready to make this change because of their existing workflow, we have this option also.” Communications across the industry are very “non-cohesive,” according to Khachab, with suppliers often having to monitor phone lines, text messages, and fax machines to ensure no orders or amendments are missed. “This is often time- and labor-consuming and leads to mistakes, through misheard voicemails and mistyped messages,” he said. “Our online system stores product codes and units, effectively eliminating these mistakes, allowing supplier representatives to focus on good service rather than dealing with errors.” 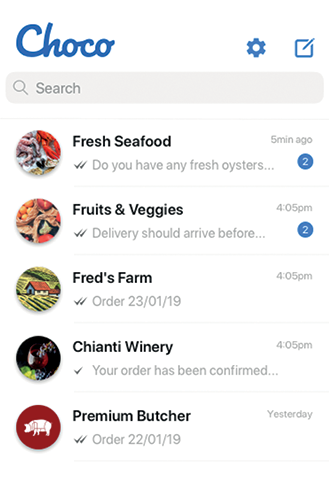 Above: Choco app with messaging functionality

Choco is currently operational in nine countries, including the U.S., Germany, France, Spain, and Brazil. The company has now raised more than $70 million since its inception, and with its latest investment — which included participation from Bessemer Venture Partners, Atlantic Labs, Target Global, and Greyhound — it’s now well financed to expand into new markets and double its team to more than 200 employees by the end of 2020.

The National Restaurant Association projects that the U.S. restaurant industry alone will be worth $1.2 trillion by 2030, up from $833 billion in 2018. However, the sector is already seeing significant disruptions, including the rise of delivery-only “cloud kitchens” powered by burgeoning on-demand delivery networks. Various platforms have also emerged to help brick-and-mortar eateries transition to online ordering. Regardless of how the restaurant industry looks a decade from now, one thing that likely won’t change is the need for restaurants to procure high-quality produce from suppliers both at home and abroad.

Choco offers restaurants a mobile app through which they can find and purchase produce. The idea is that rather than having to pick up a phone to contact 10-15 suppliers, which is time-consuming and leaves no record, they can order from multiple suppliers through a single app, with automatic notifications, alerts, and confirmations. 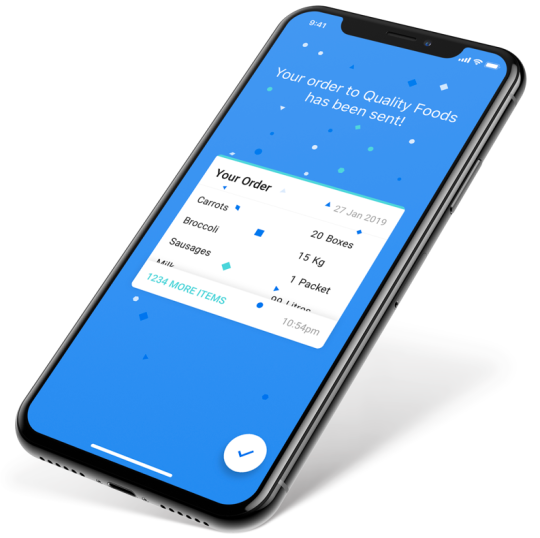 This also removes ambiguities from the process because orders are placed through a menu-style interface. In theory, this reduces the need to return goods that may then end up in a landfill. Roughly one-third of food produced globally each year never reaches a human mouth, according to the United Nations’ Food and Agriculture Organization (FAO). This effectively means $1 trillion worth of perfectly edible food goes uneaten.

“To combat this in a way that seamlessly integrates with the workflow of restaurants and suppliers, the Choco app is made tailored to each restaurant,” Khachab said. “We digitalize the order guides, or the products the restaurant usually orders, including units and product ID numbers, and connect these with the exact suppliers they usually order from. This actually reduces the number of ‘second runs’ by up to 90% and makes ordering 3 times faster.” 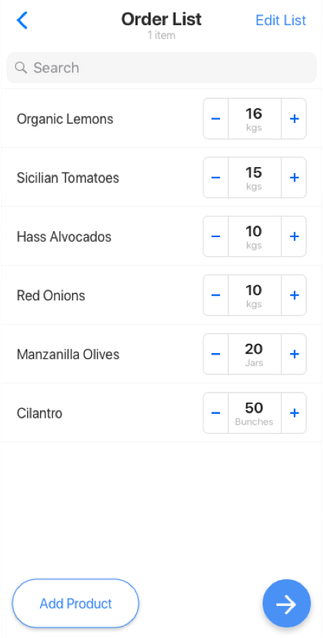 Above: Ordering through Choco

Choco’s latest cash injection comes just six months after its previous $33.5 million raise, which suggests investors see huge potential in technologies that can improve the food supply chain. A number of other companies are also working toward this end, including Full Harvest, a B2B marketplace that helps farmers offload surplus and imperfect produce to food and beverage companies and raised $8.5 million back in 2018. A few months back, Green Rabbit closed a $31 million investment to automate the food distribution, fulfillment, and delivery processes.

It is worth noting, though, that Choco isn’t yet making money — its platform is free to use for both restaurants and suppliers. For now, the focus is simply on gaining traction. The company does have some idea of how it will make money though, with a model that will include optional premium features to “capitalize on supply chain inefficiencies,” according to Khachab. Examples of this include food-waste tracking smarts, inventory management, predictive analytics, truck routing, and more.

“These will target, and be designed for, three distinct user groups — producers, distributors, and restaurants,” Khachab said. “Our current non-paid offering is just the start.”

The COVID-19 crisis has hit many sectors hard, and with consumers forced into lockdown the restaurant industry is one that has been particularly affected. However, many kitchens are still able to dispatch food, with tech giants such as Uber and Lyft redistributing their driver resources to address the shift in demand from ride-hailing to deliveries. And once the pandemic passes, the world should hopefully return to some semblance of normalcy.

“On the consumer side, people will start coming back to restaurants,” Khachab said. “It’s about the social experience, the social gathering, and about experiencing this real form of art produced by chefs with so much passion. Food is also one of the most important and beautiful ways to perceive and communicate culture. Not to mention the demand for convenient, varied, and professionally prepared food in the working world will undoubtedly return.”

Choco is also following a trend that has seen many of the big technology companies pivot their businesses to cater to the current crisis. With another $30.2 million in the bank, the company is now launching a direct-to-consumer business, enabling suppliers to funnel their excess supplies directly to end users, addressing the ongoing issue of panic-buying that results in empty grocery store shelves. The problem here isn’t that there is less food available overall, it’s that the supply chain has struggled to adapt to the huge spike in shopping. Choco is targeting suppliers near the epicenters of the coronavirus crisis, including New York and Paris, to help them assemble digital storefronts overnight.

On the restaurant side, Choco has also said it is helping them set up mobile ordering and delivery operations aimed specifically at smaller, family-owned and local restaurants.

“This was a pure reaction to the demands of the market,” Khachab said. “We were seeing supermarket shelves empty while our partner suppliers, such as Krystal Fruits and Vegetables in New York, were left with $800,000 in unsold produce. This would all have been wasted, and Mike [Longo, Kyrstal owner] was ready to fire most of his staff. After this web store launched, he has seen a 131% growth in his B2C customer base from zero and is now looking to hire more staff.”

Khachab also said the startup is committing 100% of the profits from this initiative directly to local restaurant charities in each city it operates in.

“We are at a time of global crisis where our industry needs the help — and the digital tools — to keep businesses running,” Khachab continued.