CodeSignal, a platform that helps recruiters prescreen software development candidates through automated technical assessments, has raised $25 million in a series B round of funding led by Menlo Ventures.

More companies have committed to supporting a distributed workforce — even in a post-pandemic world — which has created a fertile ground for technology that enables them to make the transition seamlessly. “We’ve seen an insane acceleration of demand for our product since March,” CodeSignal CEO Tigran Sloyan told VentureBeat. “Everything has moved online, and companies need a better remote assessment solution.”

Founded in 2015 as CodeFights — with a name change two years ago — CodeSignal wants to help companies “go beyond resumes” when recruiting new technical talent by automating and scaling interviews. In addition to saving time and money, the idea is to reduce bias in the hiring process by helping companies adhere to a consistent interview structure that pits all candidates against the same objective standards.

A company recruiting for a single software engineering position may receive thousands or even tens of thousands of applications, depending on the role. Wading through these resumes or application forms to find the best cohort of candidates can be a hugely resource-intensive process. To reduce an applicant pool to a manageable level, the prescreening process may simply entail a cursory glance at information such as which university the applicant attended or where they have worked.

However, relying on such “unreliable proxies,” as Sloyan calls this information, means the assessor’s own biases may impact who makes it past the first hurdle — perhaps favoring someone who attended the same school or worked for the same company. “With CodeSignal, companies are able to go beyond resumes and request all applicants to complete a fair and unbiased assessment that closely mimics the job the candidates are applying for,” Sloyan told VentureBeat.

With CodeSignal integrated into their recruitment toolset, companies can automatically send applicants a certified assessment to identify the best software engineers, and CodeSignal shares the data and results with the hiring company. Once the results from all the applicants are in, CodeSignal allocates what it calls a “coding score” that shows how each candidate performed relative to the industry standard. A separate report provides deeper data on their technical aptitude.

“The score is typically not the only factor that influences who moves forward in the process, but it greatly reduces both the time needed to review candidates at the top of the funnel, as well the bias involved in that review process,” Sloyan said. 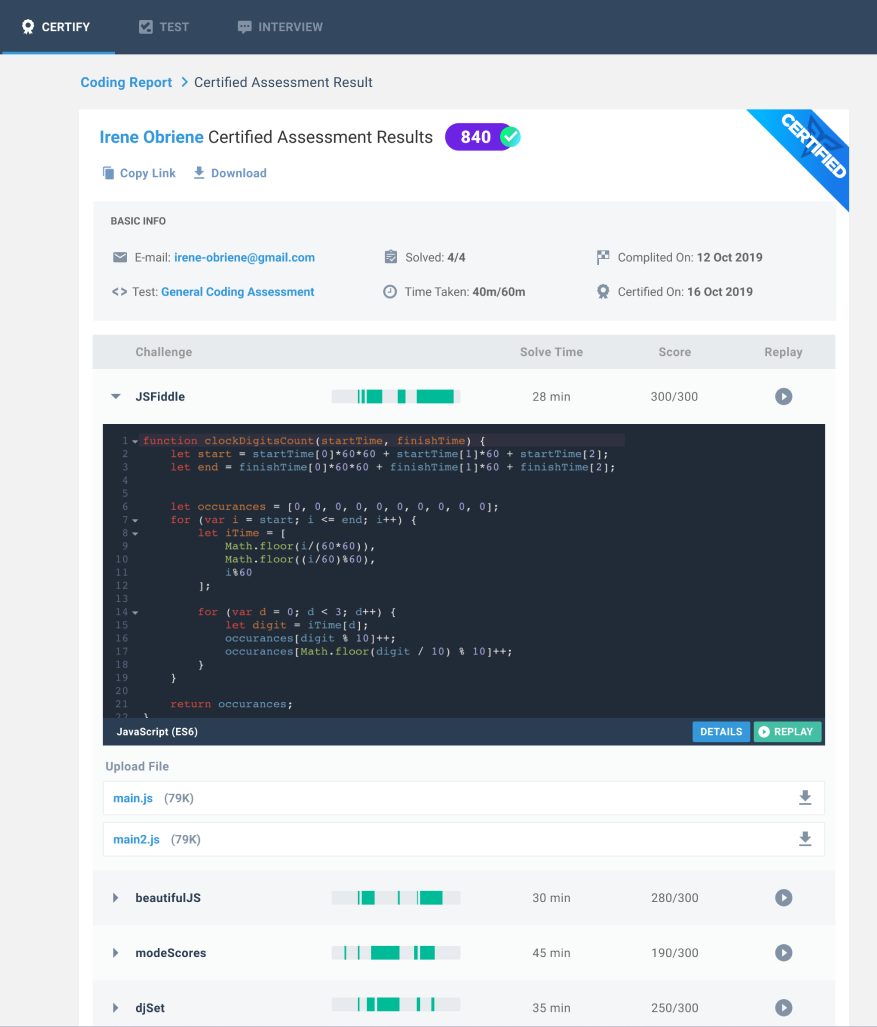 The initial prescreening tests are standardized, giving recruiters a better idea of how a candidate performed relative to the wider industry, but companies can continue to use CodeSignal as part of the latter assessment stages, with customizable in-depth testing based on real-world scenarios that allows recruiters to tailor tests to specific roles.

“The downside in customizing is you start lacking the industrywide insights that Certify delivers, but the advantage is that you can zero in on particular skills that you care about more,” Sloyan explained. 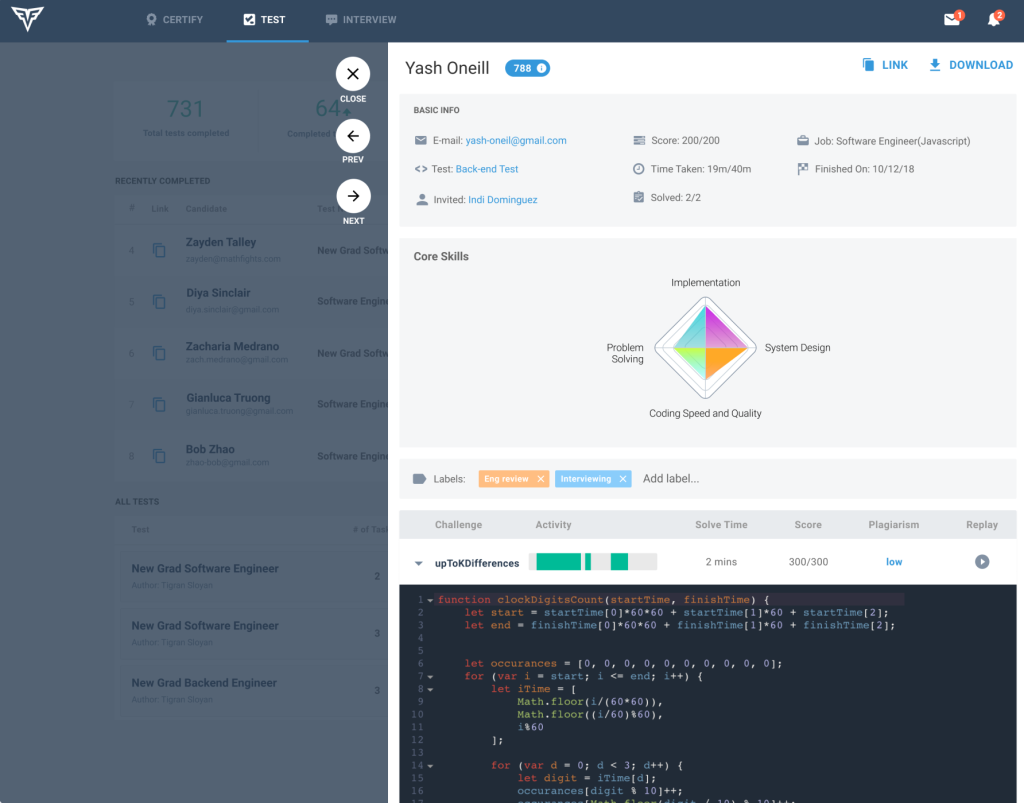 When candidates progress, recruiters can also leverage CodeSignal Interview, a collaborative integrated code environment (IDE) along the lines of Visual Studio Code, with support for more than 70 languages, frameworks, and libraries. Through live video chat, interviewers can work with candidates on unit tests and debug mistakes together, garnering insights into how they approach problem-solving and how well they might fit into the organization. 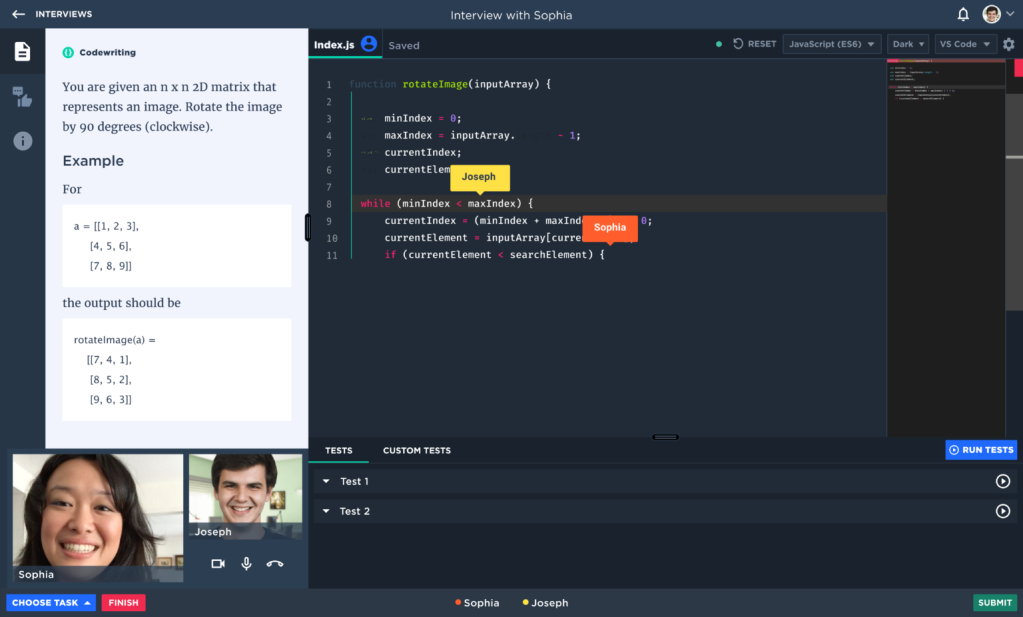 CodeSignal uses AI in two core areas. Some of the assessments, particularly high-volume ones like its General Coding Assessment (GCA), have built-in proctoring tools to maximize integrity. For example, identity verification leans on facial recognition techniques to compare the candidate’s likeness with a government-issued ID captured by their device’s camera. “If there is an identity mismatch flagged by the system, it goes through a secondary human review to make sure it’s not just a system error due to poor picture quality,” Sloyan added.

The platform can also track eye movement, whether other people are in the room, and mobile phone use to minimize cheating. Elsewhere, CodeSignal uses static analyses to identify whether the code adheres to industry best practices, with machine learning models spotting vulnerabilities in the test code.

CodeSignal had previously raised $12.5 million, and its latest $25 million cash injection included investors such as Capital One Ventures, CM Ventures, Human Capital, TripHammer Ventures, E.ventures, A Capital, Felicis Ventures, and Correlation Ventures. The company is now well-positioned to fund an expansion into “new customer verticals,” adding to its existing roster of high-profile clients such as Uber, Asana, Postmates, Zoom, Reddit, and Instacart. CodeSignal, which uses its own platform to recruit developers, also plans to grow its team.

Given that every company is now effectively a software company, demand for developers will likely only increase — data from the U.S. Bureau of Labor Statistics (BLS) suggests software developer employment is on course to grow by 22% between now and 2029, “much faster than the average for all occupations.” This positions CodeSignal favorably, as it promises to reduce “hundreds of hours” of engineering and recruitment time by automating key screening processes. Moreover, in a world that is rapidly embracing remote work, companies can access a much broader global talent pool, which will increase demand for robust virtual recruitment tools.

“More companies have opened up their hiring pools to all of the U.S. or the world, which means the level of noise has gone up exponentially and they need automation to be able to separate signal from that noise,” Sloyan said. “COVID-19 has accelerated the digital transformation that all industries are going through, and everyone is seeing an increase in demand for technical talent since engineers are the only ones that can build that digital future.”