For private ride-hailing and ride-sharing, we have Uber, Lyft, Gett, Grab, and countless others around the world. For public transport stalwarts, there is Google Maps, Citymapper, Transit, Moovit, and more, each serving up the best combination of ways — including trains, boats, buses, and more — to get from A to B.

On the surface, it would appear that there isn’t much room for another urban transport app — but Here Technologies, the company behind the popular location and navigation platform, disagrees.

Today, Here launched a new standalone mobile app called SoMo, derived from the term “social mobility,” to move the concept of transport apps up a notch — SoMo has been built from the bottom up as an all-encompassing social transport app for both urban and rural dwellers.

SoMo merges all modes of transport, including public, private, and personal, into a single platform, enabling anyone to see all their options from a single interface. But SoMo’s core selling point is its enablement of free rides by allowing people to create social circles around specific event categories, such as a one-off sporting occasion or concert, or recurring events such as a work commute or a child’s Saturday morning soccer practice.

“SoMo is the bridge to today’s sharing economy,” noted Liad Itzhak, head of Here Technologies’ mobility unit. “Consumers should have freedom of choice in how and with whom they travel. That’s why SoMo brings people together based on common social interests and mobility demand, whether they’re traveling to a holiday party, basketball practice, or a Beyoncé concert.”

By way of a quick recap, Here is one of the major online mapping platforms alongside the likes of Google Maps, TomTom, and OpenStreetMap. The story behind how it got to where it is today is a rather convoluted one — Nokia acquired digital map data company Navteq for $8 billion in 2007 to power its Nokia Maps product, which in turn was rebranded as Here in 2012. Nokia then sold Here to a consortium of German car manufacturers three years later for $3 billion.

Though Here does offer some consumer-facing applications of its own, including a Google Maps-style navigation app called Here WeGo, it’s third-party licensing that serves as its core business. And central to this is data, which is partly why consumer mobile apps are so important to Here — they help garner insights into how people are traveling. SoMo fits into that broader scheme — it will help improve the Here platform’s real-time traffic data, quality of maps, and more.

However, Here will also operate a revenue-sharing model with the on-demand transport providers it surfaces through the app.

Getting set up with SoMo is straightforward — you first need to provide your mobile telephone number, because this is what will help you connect with your friends and power all the social features within the app.

After that, you enter your name, upload a profile photo, and you’re good to go. 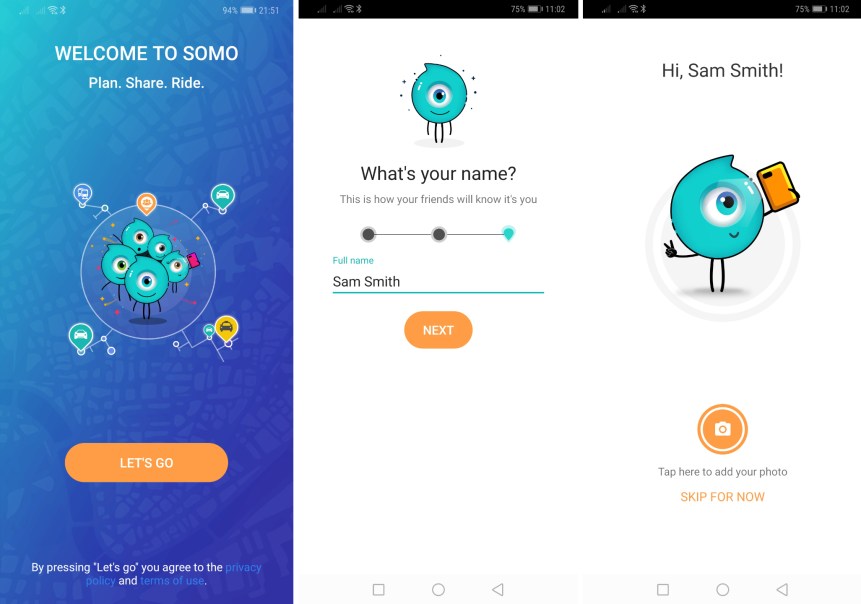 Above: SoMo: Getting set up

The app has two core sections: “create a ride” and “create a gathering.”

In “create a ride,” SoMo can be used as a standard navigation app, similar to Google Maps, Waze, or Here’s very own Here WeGo. You enter the start and end locations, and hit “drive” (if you’re driving). Or, you can choose to see what your optimum public transport options are by hitting the little “bus” tab on the right. 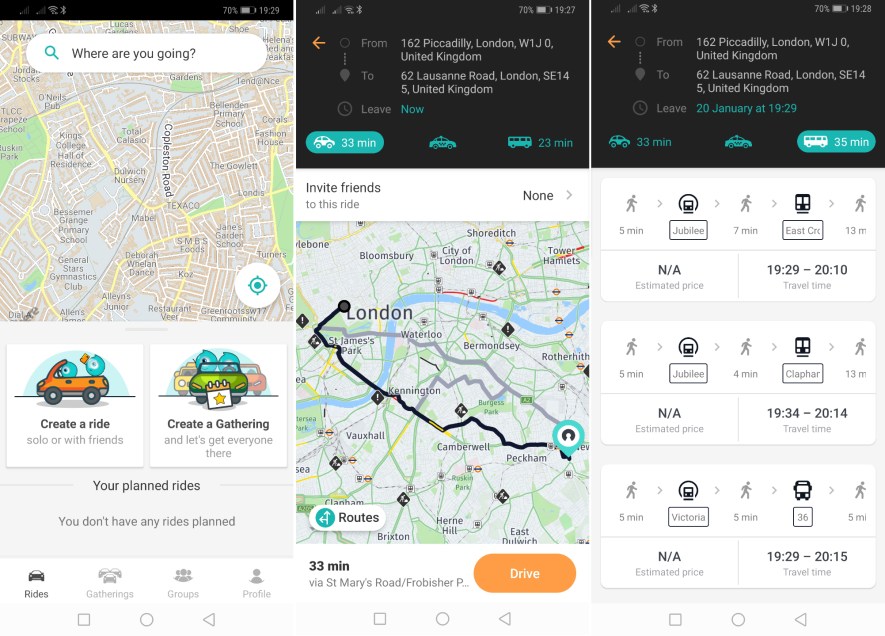 Above: SoMo: Creating a ride

However, these features are not really SoMo’s core raison d’être — they’re more “nice-to-haves.”

When you’re creating a ride, you can invite friends and acquaintances to join a ride, sort of like a carpool / ride-share service except you hand-pick the individuals you want to travel with, be it work colleagues, family members, or best buddies. This can sort of be replicated through a mix of messaging apps and Google Maps, but SoMo facilitates all the travel particulars inside a single app, and it displays the full ride details and real-time ETAs to everyone from the get-go.

Plus, given that SoMo is built atop Here’s navigation platform, the app can optimize routes based on the time-of-day, distance, and all the riders’ various pickup / drop-off points.

It’s worth noting that SoMo isn’t purely for those who have their own cars. It also integrates into the Here Mobility Marketplace, which launched last January to serve up access to third-party on-demand transport providers including taxis. It will also eventually add support for additional services including bike-shares, helicopters, boat taxis, and more. 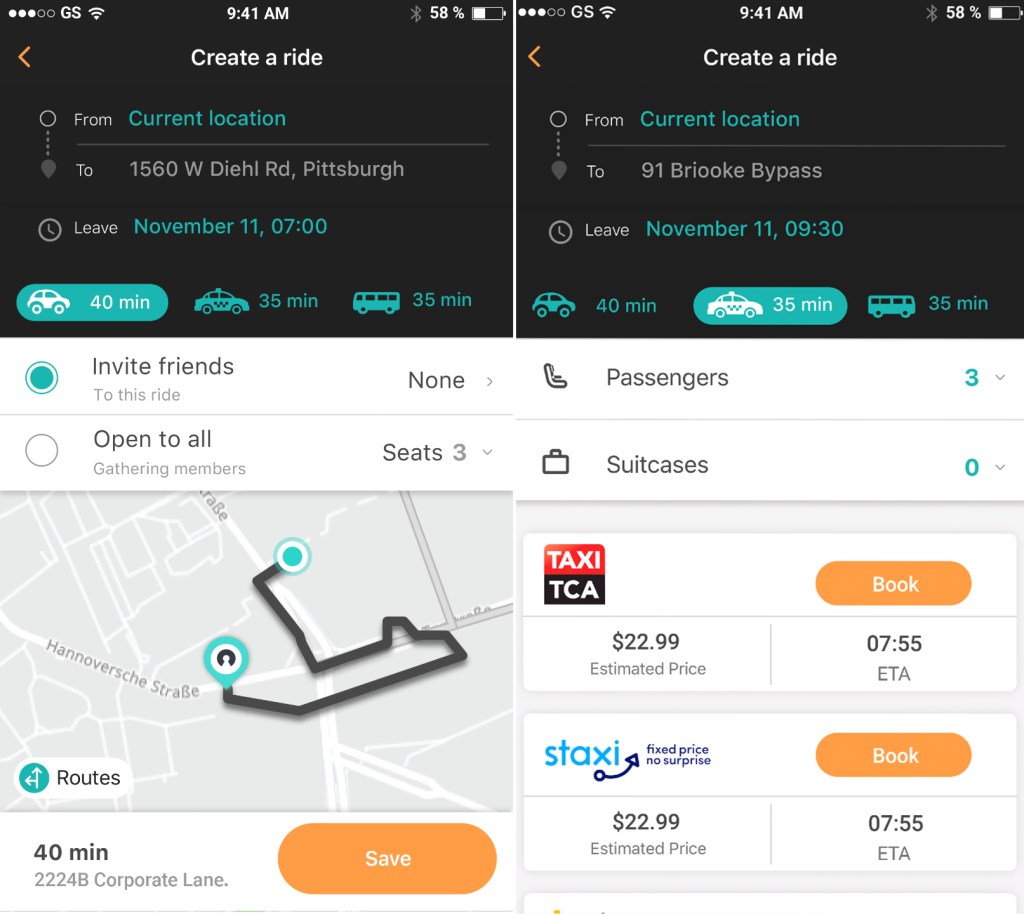 Above: SoMo: Create a ride

The mobility marketplace, and thus on-demand ride services, will only be available through SoMo in 15 cities at first — London, Athens, Barcelona, Amsterdam, Brussels, Las Vegas, New Orleans, Nice, Los Angeles, Helsinki, Piraeus, Thessaloniki, Almere Stad, Haarlem, and the Hague. But the company told VentureBeat that it expects to open to up to 10 new cities each month, and it anticipates supporting more than 100 cities across Europe, North America, and South America by the end of 2019.

Then there is the issue of the limited on-demand transport providers available through the Here Mobility Marketplace. There is no Uber, something that is unlikely to change soon — even though Here said it would welcome the omnipresent ride-hailing company if it chose to join.

“We believe that everyone that shares the same vision of building a competitive mobility ecosystem will want to join,” a spokesperson told VentureBeat. “The few players who will choose to try and build a monopolistic position and eliminate competition in the market will probably choose not to join. It’s up to each service provider, including Uber, to decide how they see the future of mobility.”

It’s worth highlighting SoMo’s social credentials, given that this plays a central role in its pitch.

Inside the app, users can create groups of people that constitute the social circles around which travel is coordinated. So this could be “work commute,” “soccer practice,” or whatever. These groups form the basis for all the social ride-sharing aspects of the app.

These groups are particularly integral to the “gatherings” section of the app. These gatherings can be defined as pretty much anything that has a location, time, intent, and group of people attending. These can be one-off events or recurring, and during the setup process you stipulate all the details, including times, locations, and members. Only the group admin can add new people to a group, and all those who are added to a group receive a push notification to their device informing them.

Through these gatherings, members can figure out the best way for all of them to get to a specific place, which may involve sharing rides with each other, using on-demand transport, trains, or a combination. 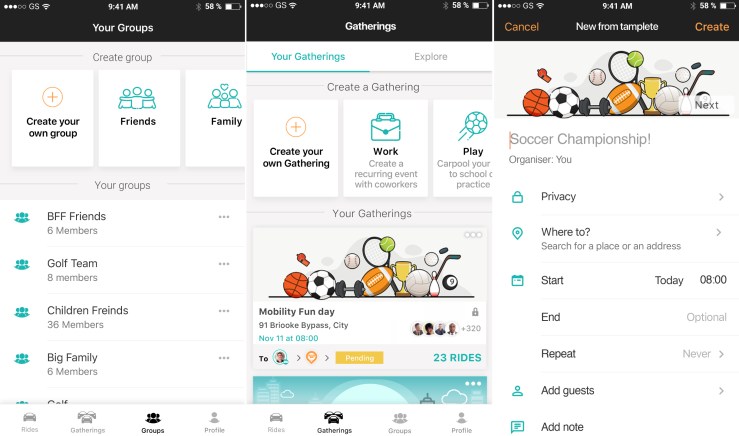 Above: SoMo: Groups and gatherings

Gatherings are set to private by default, but this can be switched to public, which enhances the possibilities of SoMo considerably.

Anyone who has tried to travel to a concert in a neighboring town or city on a Sunday night, for example, will know that transport can be a major obstacle. If trains stop at 11p.m., you may have to leave the gig half an hour early to ensure you’re not stuck. And even if you have your own car, parking can be a nuisance, and it also prevents you from having a few beers at the show. SoMo’s “public gatherings” allows anyone to set up — or join — a temporary social circle around a specific event and find people to travel with.

Again, SoMo takes care of all the logistics, mapping out the best ways for all members to get from their destination and back. 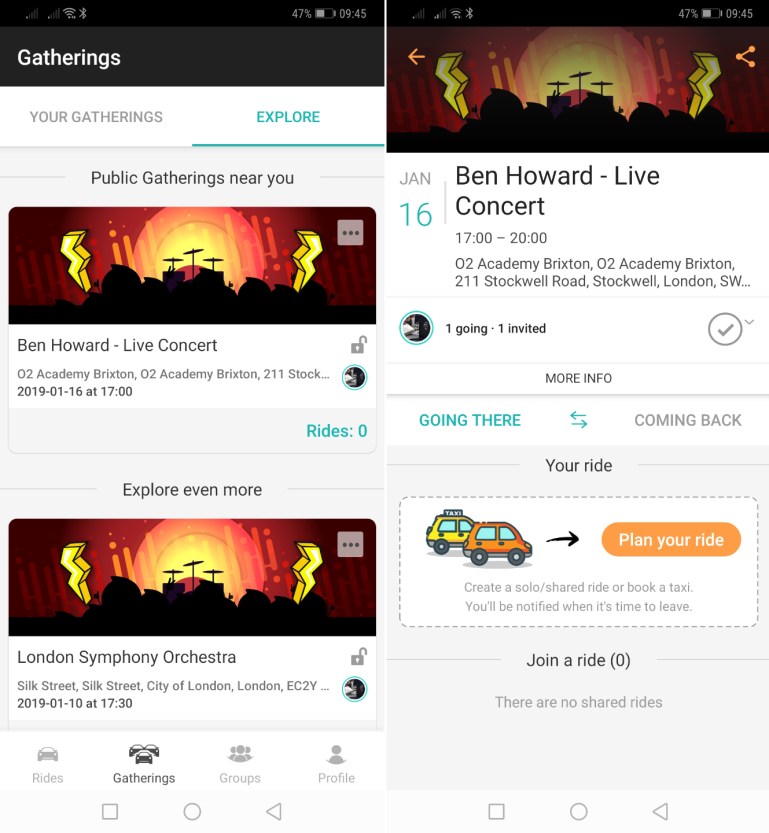 One small point worth noting here is that it would be great if SoMo could include some sort of “tipping” functionality, or an easy way for members of a ride-share to contribute their share of the fuel. As things stand, riders will have to resort to handing cash over to the driver, or otherwise share PayPal / bank details with each other (assuming the driver wants fuel reimbursed).

SoMo takes things to the next level, with a genuinely interesting all-in-one transport proposition that holds a great deal of potential. And “potential” is the key word here. One of the hardest obstacles for any budding social app to circumvent is gaining users. While SoMo does work as a standalone navigation app for solo travelers, its main selling point is that it’s social, and until all your friends and work colleagues start using SoMo, it will hold limited appeal. Word-of-mouth will be integral to getting more people using SoMo, and Here has some ideas as to how the app could appeal to various people.

“Just as platforms like LinkedIn, Airbnb, and Facebook have leveraged social connectivity, SoMo taps into the power of social networks to reimagine the future of transportation,” added Itzhak. “Standing at the forefront of the social mobility revolution, SoMo enables users to plan, share, and ride in a way that’s simple and hassle-free. Increasing the average car occupancy will make traffic jams disappear and will have an enormous impact on our planet, reducing pollution and making it much greener.”

But all this also raises the question of why Google hasn’t enabled such functionality inside Google Maps. Indeed, the internet giant has been pushing more social functionality into Maps in recent times, recenlty launching a new group-planning feature inside the mobile app, for example — but that is more about creating polls around deciding which places to go to eat. However, don’t be surprised if Google launches something similar to SoMo in the future, and it would stand a much greater chance of gaining traction given that billions of people already have Google Maps installed on their phones.

SoMo is available to download on iOS and Android today.