When is a bus not a bus? Give up? When it’s an eight-seater private hire vehicle designed to bypass strict city regulations.

If that punchline didn’t have you laughing out loud, well, you should know it wasn’t a joke. Popular city transit app Citymapper is launching its own public transport service in London, called Smart Ride, which is now live in the London area. You can basically book transport directly through the Citymapper app.

This adds to a growing number of initiatives from the tech startup world that blur the lines between what constitutes a “bus” and a “taxi” — or, to put it another way, between public and private transport.

By way of a quick recap, Citymapper is a popular transport app used in dozens of conurbations globally, including New York, Boston, San Francisco, Tokyo, and its native London. The company announced last May that it was putting its gargantuan arsenal of travel data to good use by plugging the gaps in London’s transport infrastructure. To do this, it started trialing its own smart green bus in the U.K. capital, following pre-set routes and allowing passengers to jump on and off at bus stops.

Yes, it all sounded very much like a traditional bus, except it sought to use its trove of urban mobility data to observe how users travel around the city and identify areas that could be better served by public transport. The company introduced its first commercial bus service a few months later to serve East London through weekend nights.

However, Citymapper identified a key problem with running a commercial bus service in London — namely, regulation. The company said that it had garnered enough data from its first weekend in operation to change how it operated its route, but it had to apply to local transport authorities for permission to do so and then wait for the lengthy approval process. So Citymapper was effectively shackled in its attempt to use real-time data to tweak its “fixed-route” bus service.

Private hire vehicles (such as taxis), on the other hand, aren’t bound by such regulation and are therefore afforded more freedom to roam wherever they wish. According to the powers that be, if a vehicle can carry nine or more people, it is classed as a bus, but if it carries fewer than that, it is branded a private hire vehicle.

“As a result, a private hire vehicle can respond to demand, a bus cannot,” the company noted in a blog post this week. “That makes it hard for a bus, even a smart green minibus, to be part of the ‘demand-responsive’ future.”

The upshot of all this is that Citymapper is now focusing on smaller eight-seater vehicles in its latest attempt to fix urban mobility with its own transport. The Smart Ride service will work similar to buses insofar as it will operate on a fixed network and will have dedicated stops.

But, unlike a bus, you’ll be able to book a seat, much as you would with a taxi. Even more importantly, Citymapper retains a degree of flexibility over any tweaks and changes it may wish to make to the service and avoids having to jump through regulatory hoops. 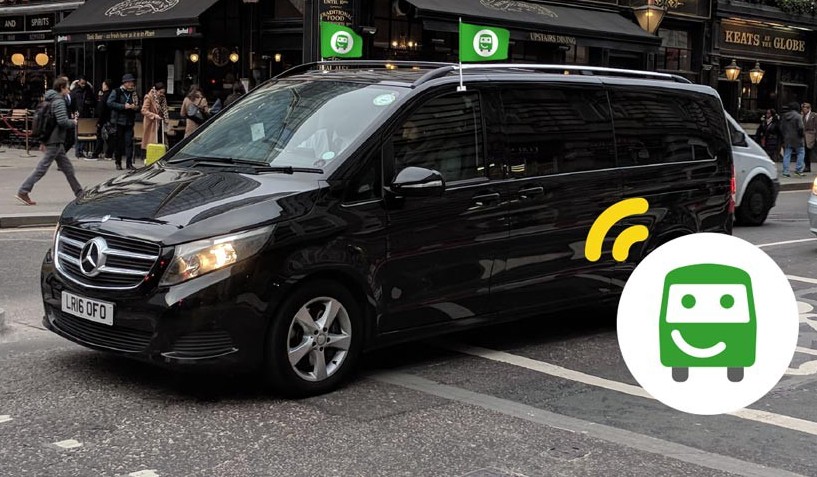 If this is all starting to sound familiar, you’re likely thinking of a couple of well-established urban mobility tech firms in the U.S.

Last March, Lyft drew ridicule when it effectively reinvented the bus with its Lyft Shuttle service that offered fixed routes and fares.

And just yesterday Uber announced the official launch of its first new product in several years. Uber Express Pool is similar to the company’s existing carpooling service, UberPool, except Express Pool doesn’t offer a precise door-to-door service. Instead, Uber figures out an optimum route that runs near the people wishing to share a ride and requires those individuals to walk a block or two to meet their Uber at an “Express spot.” They may also have to walk a short distance at the end, depending on their actual destination. In theory, this means the service should make fewer stops, with fewer detours, and offer a more efficient journey than UberPool.

Similar to Citymapper’s initiative, Express Pool meshes some of the benefits of private and public transport to create a cheaper, more streamlined service. But it’s not the first time Uber has dabbled in bus-like services, as it previously experimented with UberHop, which was also similar to UberPool, except that it followed a set route during key commuting hours for a flat fare — just like a bus. The UberHop pilot was later discontinued as the company looked to take its learnings and improve UberPool in the future.

Uber is also now looking to enter the dockless bike-sharing business via a partnership with Jump, and it has been testing Uber Bike in San Francisco for the past few weeks, with plans to extend the program to more cities.

At a conference in San Francisco last week, new Uber CEO Dara Khosrowshahi talked in depth about his vision for the company, explaining that the ultimate goal is to get people (or goods) from “point A to point B,” as noted by Bloomberg.

It has been clear for some time that Uber’s raison d’être goes well beyond being a simple e-taxi app. It’s an intricate transport network that uses data to join the dots between vehicles, people, and goods. The company now delivers food, it has shown its potential as a courier service via UberRush, and it has also entered the lucrative freighting space.

But Uber’s ambitions extend even further — it wants to run public bus networks for cities. “Cars are to us what books are to Amazon,” Khosrowshahi added. “I want to run the bus systems for a city. I want you to be able to take an Uber and get into the subway … and get out and have an Uber waiting for you.”

Many cities could benefit from greater efficiencies in their public transport infrastructure, and data can clearly play a large role in this. However, debates will continue over how much leeway private companies such as Uber should be given in terms of their control over public transport. When profits are the ultimate goal, should Uber be given a seat at the public transport table?

Despite encountering regulatory troubles in many cities around the world, Uber isn’t going away anytime soon, and it — along with its competitors — has shown how data can be leveraged to match supply with demand. Increasingly, urban mobility companies such as Uber, Lyft, and Citymapper can be used to augment, rather than replace, existing public transport.

A few months back, Uber, Citymapper, and a bunch of other transport-focused companies joined public transport advocacy network UITP, a nonprofit global advocacy network that brings together stakeholders from across transport to improve urban mobility. “Alone, these new players do not have the capacity or capability to meet every journey need or solve congestion issues,” said IAPT secretary general Alain Flausch, at the time. “They therefore need to operate to complement existing high-quality public transport.”

Elsewhere, Berlin-based Door2Door, which joined the UITP last year alongside Uber and Citymapper, offers cities and local authorities a mobility platform to launch and operate their own on-demand transport systems, providing ride-sharing services and analytics to help inform their decisions. Door2Door’s ultimate aim is to make personal car ownership a thing of the past by giving city residents more efficient alternatives. And Israeli transit startup Moovit, which is along the lines of Citymapper and just yesterday announced a $50 million funding round, is licensing its data to cities so they can analyze traffic flows, improve their transit systems, and better plan transport infrastructure projects. Canada’s Transit is also giving data to local transport authorities.

There are many discussions to be had around the role private mobility technology companies should play in improving urban transport. One thing is clear though: The lines between what constitutes “public” and “private” transportation are blurring.