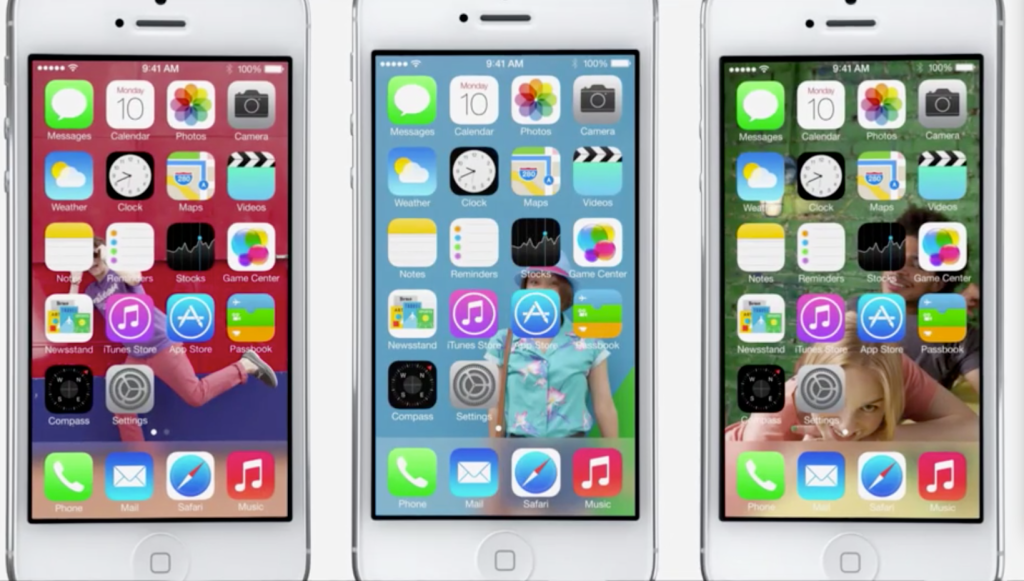 See also: iOS 7 is the essence of less

It was widely rumored the OS would follow a similar arc to Apple’s desktop operating system, Mac OS X: getting flatter, less colorful, less likable, and more workmanlike over time.

“iOS 6 is the world’s most popular operating system,” Apple CEO Tim Cook said. “This is why we get so excited about a new version of iOS.”

Major new features in iOS 7 include:

“It’s the biggest change to iOS since the beginning,” Apple design chief Jony Ive said in a pre-recorded video.

Other updates included FaceTime audio, notification syncs across all your devices, per-app VPNs for enterprise, and more, including new APIs for developers. iOS 7 includes a new gesture as well — reminiscent of Android’s back button — swipe left to go back. And folders can now have pages.

One other neat feature: a theme-like approach to iOS 7’s appearance. Changing your phone’s wallpaper, Apple said, would also affect the way many other elements on the phone look and react.

“It’s a comprehensive end-to-end redesign of the user experience,” Federighi said. “Installing iOS 7 onto your phone is like getting an entirely new phone — but one you already know how to use.”

iOS 7 is available in beta for developers today, and final release will be coming this fall. It will support iPhone 4 and later, iPad 2 and later, iPad Mini, and the iPod Touch 5th generation.

Here are some of the other things Apple announced today: