Los Angeles, California-based Trellis, an algorithm-powered research platform for litigators, today announced that it raised $14.1 million in a series A round led by Headline Ventures, with participation from Calibrate and individual investors. The company, which has raised $20 million in capital to date, plans to spend the money on expanding Trellis’ headcount and further developing its products, as well as building new APIs.

“Data is essential for legal teams, but also for better executive decision making across industries riddled with risk or litigation exposure. We’re not in the dark anymore,” CEO Nicole Clark, who cofounded Trellis with Alon Shwartz, said in a statement. “My practice radically changed when I started using data and analytics to plan my litigation strategy. The value of the data on my practice and case outcomes was abundantly clear.”

Clark was an employment and labor law litigator, often appearing in state trial courts across the country. While working in the court system, she found it difficult to access trial court data, which was stored in thousands of individual county court databases throughout the U.S. Clark had a developer friend create a tool to pull public data from a few of the courts she was appearing in most often, which became the seed of the idea for Trellis. She left her her law practice in 2018 to build the tool into a business. 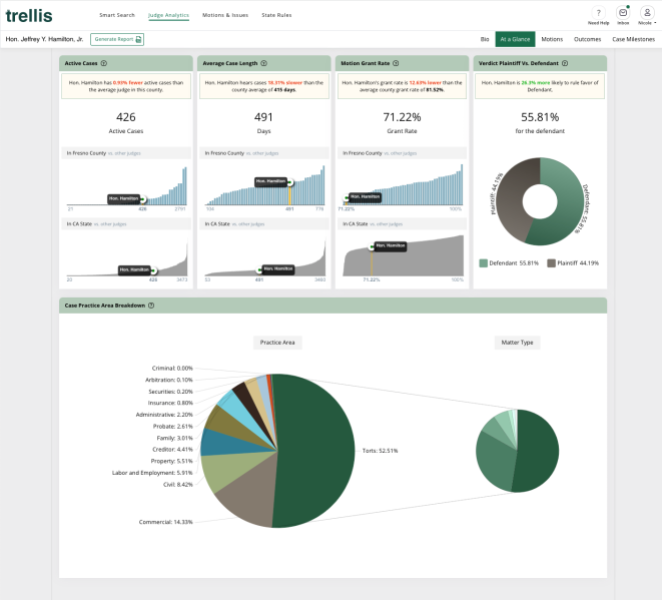 “Despite the fact that the judicial forum data belongs to the public, in order to find out any information on a case, you need to go to the trial court and know the case number to look up — which means you need to know a case exists to find out any information,” Clark told VentureBeat via email. “Trellis takes away those limitations so you can surface information by party, judge, legal issue — or any combination of those.”

Clark says that the data Trellis accesses and aggregates is entirely unstructured, hosted, and maintained separately by 3,000 different counties “with no uniformity of integration.” Trellis acquires the data, structures it, normalizes it, and parses out hearing, judge, motion, and party information across hundreds of millions of trial cases.

“Because this data is unstructured and only became digitized in the last 5 to 10 years, there was no training data for [our] algorithms. So we had to do a massive classification effort across hundreds of different data points — which was different county by county — to create the training set to be able to run machine learning in the first place,” Clark said. “The types of analytics and variations on insights is still in its infancy in terms of what is possible and what Trellis plans to accomplish as it continues to grow.”

Currently, Trellis provides metrics for a judge’s timing to decisions, current and historical case calendars, law firm venues and active cases, which law firms represent which companies, and more. As an example, Trellis shows enterprises which lawyers and law firms perform best based on up-to-date trial court performance data. For attorneys and legal practices, Trellis shows individual litigators’ experiences before specific judges, how long they take to get cases to settlement or trial, and verdict ranges by case type.

In every data point, Trellis also reveals the state and county average for context on where and when a judge is an outlier. In addition, Trellis provides search tools, visualizations, and a “brief bank” for motion modeling and drafting for the over 90 million documents filed by attorneys in cases around the U.S. 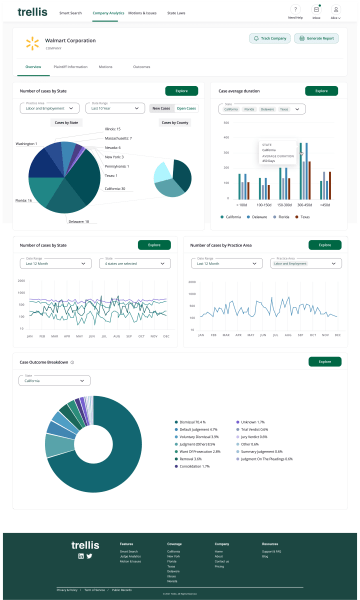 Clark says the Trellis near-term focus adds functionality that enables customers in insurance, corporations, hedge funds, and law firms. It digests data in specific ways, for example by creating their own machine learning models. The 22-employee company isn’t currently profitable despite $2 million in annual recurring revenue from 1,600 customers (and an 80% gross margin profile). It also competes against incumbents like Lexis, Westlaw, and Gavelytics. But Clark believes that Trellis’ technical capabilities give it an advantage in the nearly $1 billion legal analytics market.

“Lexis [and] Westlaw … focus on court of appeals data. Trellis focuses strictly on the state trial court system. The majority of cases — 99% — don’t make it to trial, let alone making it to trial, and then making it to appeal, and then getting the case published on appeal,” Clark said. “Gavelytics only offers judge analytics. Trellis is a ‘Google for the entire state trial court system,’ with judge analytics as one feature of the data.”

By the end of the year, Trellis plans to expand its workforce to over 30 employees.