We can probably agree that Zoom meetings, while vital during the lockdown, aren’t exactly thrilling. So MeetinVR envisions taking those meetings into virtual reality for a more immersive experience.

During the pandemic, MeetinVR could make online meetings more exciting with things like whiteboard interaction, 3D viewing, movie viewing, or podium speeches in an animated space with scenic views in the room’s virtual windows. It could also kick-start demand for VR, which has taken off more slowly than the earliest optimists hoped.

Industrial VR headset maker Varjo unveiled a collaboration with MeetinVR at the online-only Augmented World Expo today. In the works for three years, MeetinVR is available starting today in open beta, and companies can sign up for free 30-day trials. I held a meeting in the VR app on the Oculus Quest with Cristian Anton, CEO and founder of MeetinVR. We both appeared as semi-realistic virtual avatars in a meeting room where we could change the background. The first thing we did was shake each other’s virtual hand.

It was an interesting experience where I felt like I was transported to exotic locations like a space station, but the challenge will be to get people to be comfortable doing such meetings for a long time.

Above: MeetinVR gives you virtual whiteboards.

Copenhagen-based MeetinVR offers tech akin to Spatial, Breakroom, and Spaces, designed to use the 360-degree immersion of VR for meetings and events. All told, 2,000 organizations, including numerous Fortune 500 companies, tested the technology over the past three years. “With each of these customers, we’ve been meeting in virtual reality each week to learn about their experience to figure out how to improve our software,” Anton said.

The VR apps are designed to address “Zoom fatigue” and maintain high team spirit, which can sometimes deflate when working at a distance. Anton said he is targeting small meetings of 8 to 12 people. In March alone, more than 500 companies contacted the company.

“We see a lot of potential in social VR and enterprise collaboration,” Anton said. “With COVID-19, we’ve had a lot of inbound requests and an insane amount of organic traffic.” 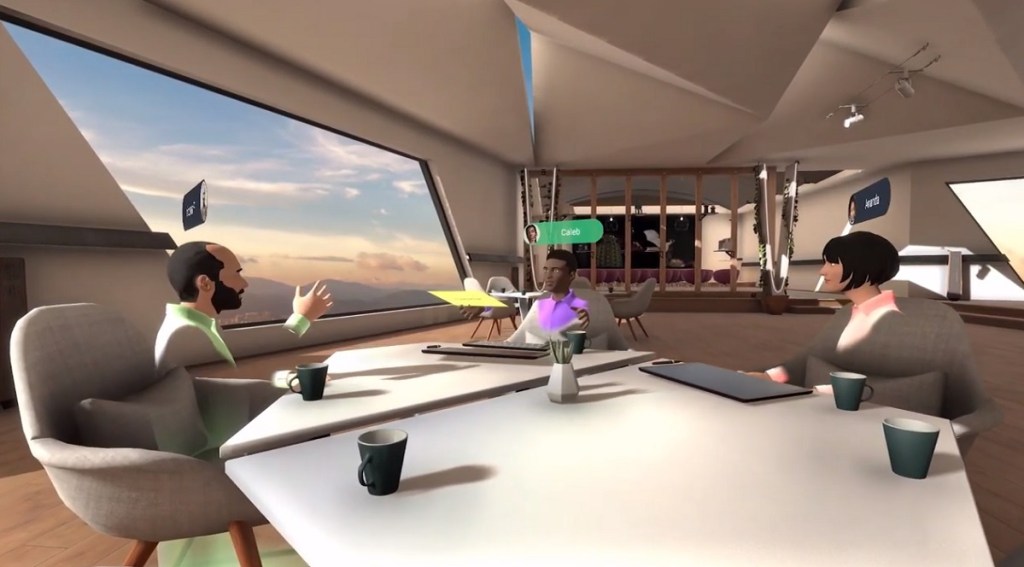 Above: You can give yourself a fancy office with great views in MeetinVR.

The main focus is on optimizing interactions so that they become better than in real life. Anton calls these “superpowers.”

“We’re actually trying to make meetings better than in real life in many ways,” Anton said. “We’re actually looking at the interaction which you normally have in real life and optimizing it to be more effective in virtual life because you don’t really have the limitations of reality.”

Some examples are the ability to grab a pen from behind your ear at any time and draw sketches in mid-air or to create sticky notes through speech. You can look at your watch to pull up a menu for navigating, or instantly change the background landscape to places such as the Dubai skyline, a penthouse in Miami, or a luxury home.

“We will also have what we call our ‘window to reality,’ where you’re able to create a plane through which you see the real world,” Anton said. “So you basically have access to your computer and to anything you want like your keyboard in the real world while you’re in the VR space without interrupting the VR experience. This means you can be fully productive in VR.” 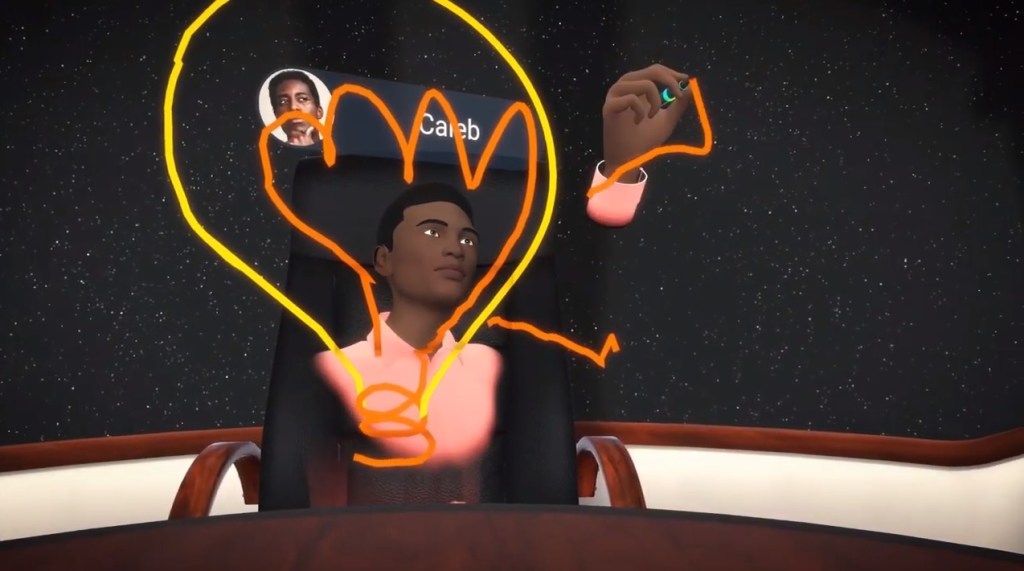 Above: You can draw in the air in MeetinVR.

Anton started working on the tech in 2016, toiling in his bedroom at first. Like many VR entrepreneurs, he had visions of the Metaverse, the universe of virtual worlds that are all interconnected, like in novels such as Snow Crash and Ready Player One.

“When the first Oculus prototype came out, I started working with it and really started liking the technology,” Anton said. “I looked into health care training; I really saw the potential for VR collaboration about 4.5 years ago. I quit my job and started the company officially around three years ago.”

COVID-19 has boosted the interest in MeetinVR’s solution, and the company worked hard to put out the beta version. The company recently raised $500,000 from a list of Nordic angel investors and Vækstfonden (the Danish Growth Fund), bringing its total investment to date to $1.5 million. And the company is also getting ready for a new funding round soon. 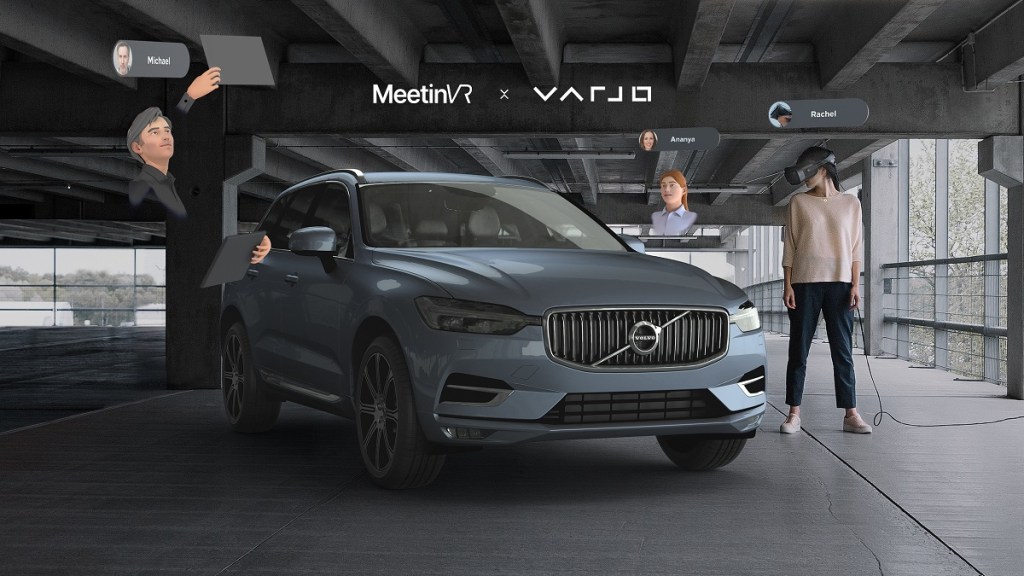 Above: Varjo is collaborating with MeetinVR.

MeetinVR has partnered with Finland’s Varjo, which is making high-resolution VR/XR headsets for industrial purposes. Through the partnership, MeetinVR will release a dedicated version of the application that supports all headsets in Varjo’s product portfolio (the VR-2, VR-2 Pro and XR-1 Developer Edition) so enterprise users can use it.

New buyers of any Varjo headset will receive six months of MeetinVR for free for five users. MeetinVR has 15 employees.

I know that some people have complaints about nausea in VR, but I didn’t have any problems with my demo of MeetinVR. Anton studied the subject of comfort in VR and implemented all of the tricks that he learned to reduce nausea. You can use the Oculus Quest or the Oculus Rift S headset; the latter offers a higher refresh rate, which should help with comfort.

“On the Quest, we can usually stay in for an hour and have a 15-minute break,” he said. “But others can spend hours in their VR meetings.”