APIs play a pivotal part in modern software development, bringing maps to ride-hailing apps, login authentication to banking apps, customer service to ecommerce apps, and privacy to any app that wants to protect customer data. Emerging from all this is the API economy, which is powering digital transformation across the spectrum and helping legacy businesses transition from monolithic on-premises software to the cloud and microservices-based applications.

Companies such as Tide, Auchan, and “several tier 1 enterprise customers” use Gravitee’s core API management product to control how their APIs are accessed, designed, and monitored.

Gravitee exists in a space that includes the likes of Tyk; Kong, which recently raised $100 million at a $1.4 billion valuation; Google-owned Apigee; and Mulesoft, which Salesforce snapped up for a cool $6.5 billion three years ago.

The global API management market was pegged at $1.6 billion in 2019, a figure that’s expected to rise to more than $9 billion within four years. With an open source foundation and a focus that extends beyond pure API management, Gravitee is striving to set itself apart from the crowd with a more flexible and customizable offering.

“As an open source API platform, Gravitee gives businesses and their developers unprecedented control and transparency over their entire API ecosystem,” Gravitee CEO Rory Blundell told VentureBeat. “APIs are now business-critical, so extensibility is a key consideration for businesses. Fully understanding the code base — and being able to contribute to that open source code to fully align to your business requirements — is a key benefit.”

At the top of the Gravitee tree is Cockpit, a tool for monitoring all Gravitee installations from one centralized dashboard. Beneath that is the open source API manager, which is available under a permissive Apache 2.0 license, and the enterprise edition, which includes a bunch of paid premium features to bring more functionality to the mix. These include monitoring and alerts; security smarts, such as automated upgrades; a visual API designer; and a marketplace for extra plugins and connectors. 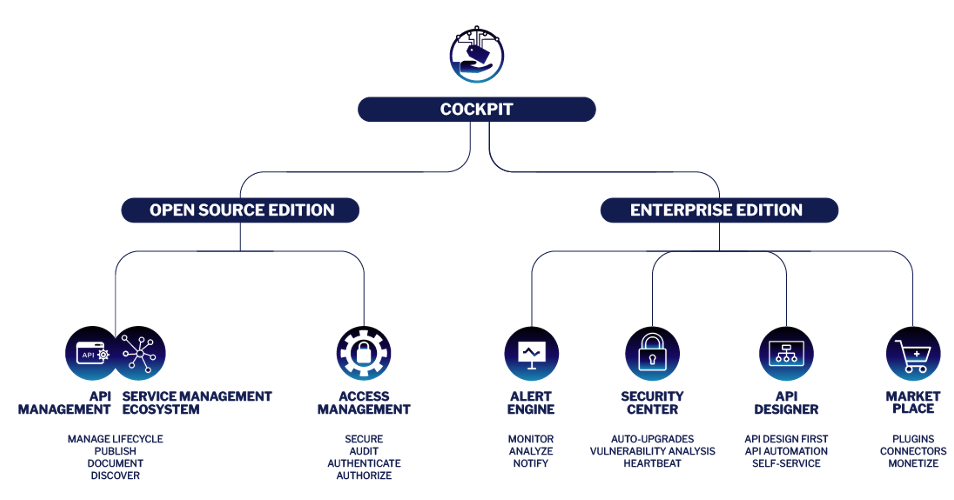 Importantly, Gravitee has also added an open source identity and access management (IAM) module to its product suite that enables businesses to easily integrate with multiple identify providers and customize their application’s sign-in experience. Blundell says this is designed to cement Gravitee’s position as “the only next-generation API platform with both API management and identity and access management.”

This effectively pits Gravitee against other notable players from the IAM space, such as Auth0, which Okta recently acquired for $6.5 billion, and the open source alternative Keycloak. But Blundell doesn’t necessarily see them as direct competitors.

“We have replaced Auth0, Keycloak, and other IAM solutions at some of our customers, so we do compete with them, but this is not our primary market,” he said. “Our access management offering is focused on augmenting API-based experiences with next-gen security — for instance, with built-in facial recognition authentication support.”

In other words, Gravitee wants to differentiate itself from both proprietary and open source rivals by serving as an all-in-one API management and IAM platform companies can use to authenticate and authorize users.

Gravitee was founded out of Lille, France in 2014 by four cofounders who had been working with French retailers to develop API implementation strategies. But they soon realized there wasn’t a sufficiently flexible enterprise-grade open source API platform for the task.

“The available platforms were hugely expensive, did not have the required features, and were largely based on older technologies,” Blundell explained. “Recognizing the size of the market — and the potential for a genuinely good product — the Gravitee cofounders decided to create Gravitee and build one.”

While all four cofounders are still involved with the company, Blundell was brought in last year as the first employee to not come from a purely engineering background — and he eventually went on to replace Nicolas Geraud as CEO.

“Given the broad skill set required to perform the CEO role, the decision was taken to help realize the potential of growth in the business,” Blundell said.

In its seven-year history, Gravitee has managed to attain profitability while entirely bootstrapped — so why raise funding now?

“The market is accelerating, and to maximize the vision Gravitee has of being the global category-leader for effortless control of the API ecosystem requires significant investment in engineering, marketing, and sales,” Blundell added.

The company’s series A round was co-led by AlbionVC and Oxx.