Patreon, a subscription and membership platform that lets creators on YouTube and elsewhere monetize their work, has raised $60 million in a series D round of funding led by Glade Brook Capital, with participation from Thrive Capital, Index Ventures, DFJ, Otherwise, Charles River Ventures, and Freestyle Capital. A number of individual artists also participated in the round, including musician Serj Tankian and actor and comedian Hannibal Buress.

Prior to now, Patreon had raised $105 million, including a $60 million round from 2017, and with another $60 million in the bank it plans to expand its platform globally, including support for new currencies, payment methods, and languages. The company has also opened a new office in Porto, Portugal while it explores locations for additional hubs.

Additionally, Conte said that the money will help it improve its core product, including “enhancing the connection between creators and patrons,” part of which will involve more customizable creator pages.

Patreon was launched in 2013 by YouTube musician Conte, who was looking for an easy way to let his fans contribute money to his online videos. As a cofounder, he also brought in former college roommate Sam Yam, who now serves as Patreon’s president and CTO.

Earlier this year, Patreon announced that it now has 3 million “patrons,” or people who pay creators to access their online content on a monthly basis. The company also recently overhauled its subscription tier lineup and now offers three plans, with fees ranging from 5-12%. 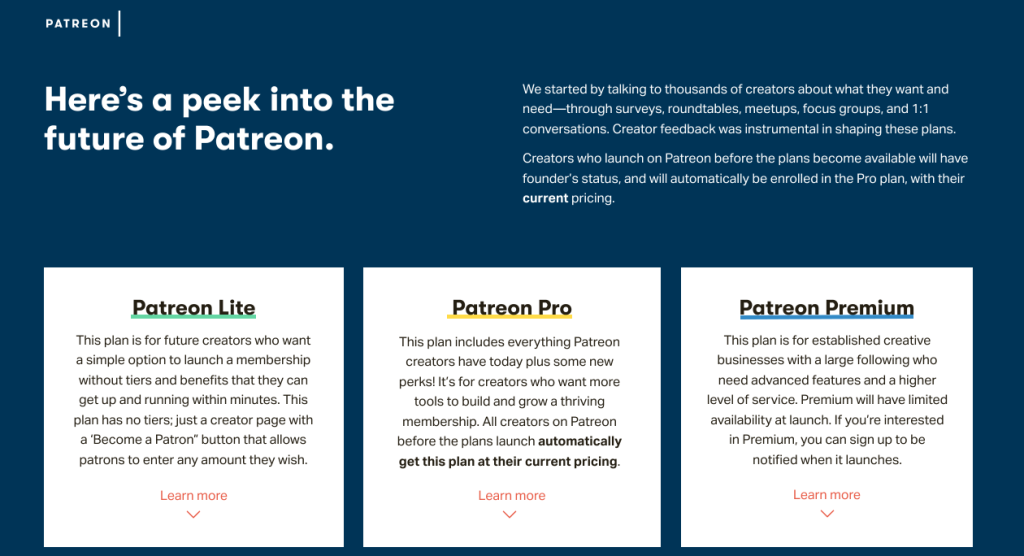 The internet has opened up a whole world of opportunity for creative types — podcasting is continuing on its upwards trajectory, with anyone able to record, distribute, and monetize their audio broadcasts entirely on their own. The same goes for musicians, such as Conte himself, as well as gamers, artists, and others.

While Patreon targets creators across platforms, the platforms themselves have also been ramping up their creator-focused monetizing tools. Back in 2017, YouTube launched a feature called Super Chat, which lets fans pay to pin their comments at the top of livestreams. Last year, the video-streaming giant launched channel memberships and merchandising. However, such platforms are still very advertising-driven, and Patreon hopes to set itself apart by focusing squarely on monetizing through memberships.

“When Sam and I launched Patreon, it was in response to a broken system, where creative work on the internet was being used to funnel massive profits to big companies without valuing or rewarding the creators,” Conte continued. “This core problem has only intensified, despite others launching Patreon-like membership features. Yet the fundamental system remains broken; other companies still continue to prioritize advertising dollars over creators.”

Patreon previously announced that this year it expects to reach $1 billion in total payments to creators around the world since its inception. Conte said the company is still on course to meet that figure and now has an even bigger target in mind for the future.

“By the end of this year, we’ll have the honor [of saying] we’ve paid out over $1 billion to creators worldwide,” he said. “And this funding accelerates the next $10 billion paid out to creators.”