Since Qualcomm provides chips and software for most of the world’s best known virtual and augmented reality headsets, it’s uniquely able to forecast the future of mixed reality hardware. Just ahead of this week’s Augmented World Expo, Qualcomm XR chief Hugo Swart used a Spatial holographic conference to brief media on how that future will likely play out. And though some of the major innovations are years rather than months away, the company is laying the groundwork today.

Over the next decade, mixed reality is widely expected to become a key transformative technology for both businesses and average customers, as VR and AR wearables enable users to work and play in hybrid digital/real-world spaces. While prior-generation accessories have been tethered to computers or used smartphones as displays, standalone XR devices and smartphone-tethered “XR viewers” are rapidly gathering steam, a process that’s expected to continue until lightweight standalone 5G XR glasses are available, potentially replacing phones.

Today, Qualcomm is publicly unveiling the XR Optimized certification program for Snapdragon smartphones, offering device makers XR viewer specs, supporting software, and a branding badge so customers will be able to easily identify phones compatible with the headsets. As of today, nine companies — ranging from Nreal to Pico — are making compatible viewers, while seven smartphone OEMs and 15 major cellular operators are backing the initiative. 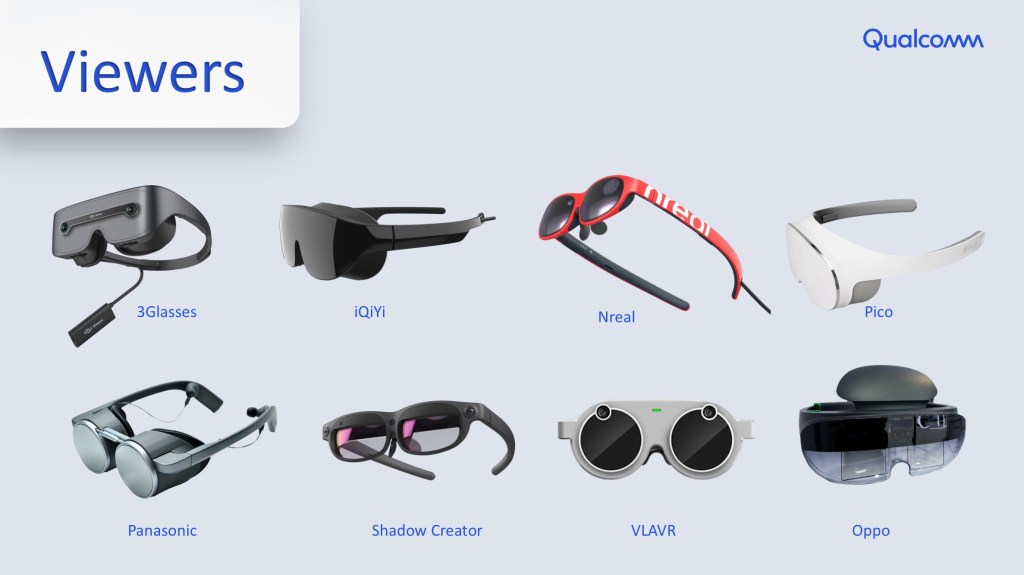 Using USB cables for connectivity, these XR viewers will initially rely on smartphones for data, a practical necessity that could help move the entire category forward. Businesses and consumers will be able to make headset purchases from local stores, potentially with subsidized hardware and service bundle pricing. Qualcomm’s XR initiative is already being backed by Verizon in the U.S., five prominent European networks, and the top carriers in China, Japan, and South Korea.

The next step forward will be wirelessly tethered XR viewers, and Swart said Wi-Fi 6E will be used to let cable-free VR and AR viewers connect to smartphones and computers, relying on 6GHz spectrum as an alternative to 60GHz millimeter wave Wi-Fi. Over the next one to four years, cabled XR viewers will transition to fully wireless connections while still using host devices for processing and network (5G) connectivity. Standalone XR devices will become lighter and sleeker during the same period but won’t achieve true glasses-like form factors for a while.

Perhaps not surprisingly, Qualcomm expects that the next big step — standalone XR glasses that look like today’s spectacles but have their own processing and 5G capabilities — are five to 10 years off. While Swart didn’t get into the finer details of that timeline, it’s clear the underlying display, processing, and battery technologies that will enable lightweight XR glasses aren’t ready to converge in a consumer product yet, but annual advances in chip miniaturization and cellular power consumption are continuing to bring the dream closer to reality.

Hardware will only be part of the story, of course. Over the next few years, Qualcomm partners are working on complete XR ecosystems. Niantic is developing its own AR platform for world-scale gaming. And former HTC head Peter Chou has launched XRSpace, a company with XR hardware and Manova — a metaverse-like gathering place akin to Facebook Horizon — to connect users for various XR experiences. Consumer adoption of solutions on the road to completely standalone XR glasses remains a question mark. But interest in early standalone VR headsets like the Oculus Quest has been encouragingly strong over the past year.