Slack calls its channels for group chat and project management the workplace of the future, and today announced that channels shared between two companies can now be set to private. Even team administrators won’t be able to see files and conversations shared in private shared channels between specific employees or team members. Before today, shared channels were also visible to other team members.

Private shared channels may come in handy for limited company partnerships, or instances when a company works with consultants or external service providers. Private channels within a team or company were available before today to limit participation to specific people.

Both teams in a private shared channel will be able to choose if they want the channel visible to their side’s other team members, product manager Sean Rose told VentureBeat in a phone interview.

“Each side controls the privacy levels so it could be public or private on either side without the other side necessarily dictating that we do that because the requirements from each side may be different,” he said. “Each team is going retain a copy of the data no matter what so they ultimately control the visibility of that even if they stop actively working together.”

Private shared channels is one in a set of new features being rolled out today by the enterprise chat app. Also announced today is the ability for admins at companies using Enterprise Grid to deploy read-only channels — channels users are required to join so they can see messages sent by executives or certain team members, but lock them out from sending any messages in response.

Slack launched Enterprise Grid one year ago with features designed to give companies with tens of thousands of employees the ability to use Slack companywide. Enterprise Grid was launched to compete with Workplace by Facebook, Microsoft Teams, and other team collaboration offerings. Slack declined to share the current number of Enterprise Grid customers.

Also today, Slack team administrators have a new place to manage shared channels. Admins who are not a member of a private shared channel will be unable to view the channel name or the conversations that take place, but they may be able to stop sharing between teams. 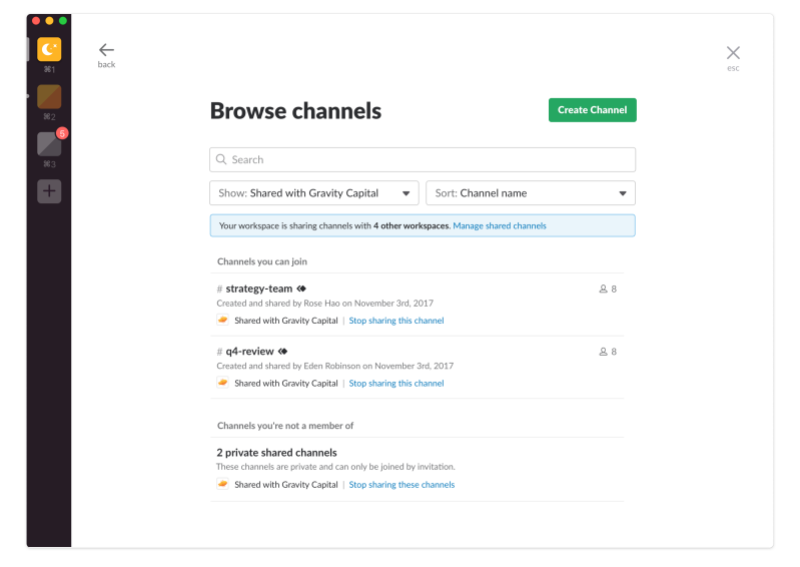 The capacity to require every member of a Slack team to see certain messages has always been available with the #general channel, the one channel included in every Slack team, but the move today extends that ability to any channel for Enterprise Grid customers.

With each of the new features added today, Rose said, “the key idea is that we’re trying to take what we built with channels and meet our customers with the different use cases we’re seeing with them, because we believe this is the way people are going to be working in the future.”