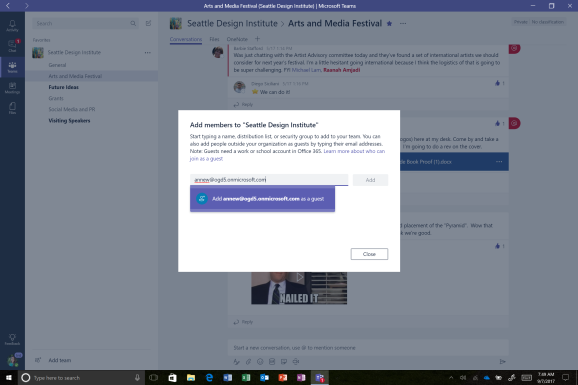 Microsoft today announced that it’s rolling out guest access for Teams so companies using the collaboration software can now invite guests from outside their companies to join their conversations. Teams, which requires an Office 365 account and debuted last November to compete with Slack, HipChat, and other enterprise chat apps, is now used by more than 125,000 organizations.

Teams can now be found in 181 markets and is available in 25 languages.

Also announced today: Developers can now use Botkit to make bots for Microsoft Teams, and Teams now has integrations with GitHub and Atlassian software like Jira.

Guests in Teams can join video chat meetings or access the same bots, interactive tabs, and private chat conversations as any other Teams user.

“At its high level, collaboration doesn’t mean much until you can bring together all of the various people with the same richness and seamlessness you’ve come to expect from your toolset,” Microsoft Teams program manager Larry Waldman told VentureBeat in an interview at Microsoft offices in San Francisco. “A team is only as good as all the parts coming together, and guest access makes it more seamless to bringing all those parts together into one ecosystem in a natural way.”

In giving Teams users the ability to grant guest access, Microsoft joins its biggest competitors, including Slack, HipChat, and Workplace by Facebook, who earlier this year made it possible for businesses to create groups for multiple companies.

“I think for sure you’ll see more in our roadmap of allowing companies to work together. This is our starting place for it,” Waldman said.

Guest access to Microsoft Teams can only be granted by administrators, who have the choice to limit guest access based on specific channels or even time of day.

“Take a big company of 10,000. You’re going to have organic creation of teams in most cases. It’s not usually locked down, but you do want central control over who is participating in these things. So by leveraging the overall Microsoft identity stack, not just can team admins see where the guests are participating, but central IT can also monitor,” Waldman said.

A “Guest” label will appear under each guest user’s name, and each channel with a guest will be labeled as well.

Among the 150,000 groups using Teams, an undisclosed number are in the education space. Collaboration tools designed especially for classrooms were made available in May.

“So if I’m a school administrator, I can create a classroom team, I can create a professional learning environment team, there’s a few different types of teams that I can create, and those are essentially provisioned with a set of resources already at their fingertips,” Waldman said.

Since the launch of Teams last November, the chat app has added features like third-party cloud access, as well as third-party bots, like Polly and Zenefits.

The app became generally available in March. In May, developers gained the ability to publish Teams apps to the Office Store.