Shortly after closing a $112 million series C funding round, data storage startup Wasabi today announced it has raised $25 million, extending its series C to $137 million and total financing to $224 million. Wasabi says it will use the additional capital to support its datacenter rollouts and grow its distribution channels while it continues to build its engineering team and partner network.

IDC forecasts that the public cloud infrastructure-as-a-service (IaaS) market will grow more than 30% annually in 2021 as enterprises move toward post-pandemic recovery. This growth is pervasive across regions, including Europe, the Middle East, and Asia, where IDC predicts the segment will expand at a 28% compound annual growth rate over the next four years.

Launched by Carbonite cofounders David Friend and Jeff Flowers in 2017, Boston-based Wasabi offers what it calls “hot cloud storage,” a cloud object storage technology that provides an interface to use with storage apps, gateways, and other platforms. The company claims its offering is faster than traditional frequent-access storage products while treating all data equally and making it readily accessible. 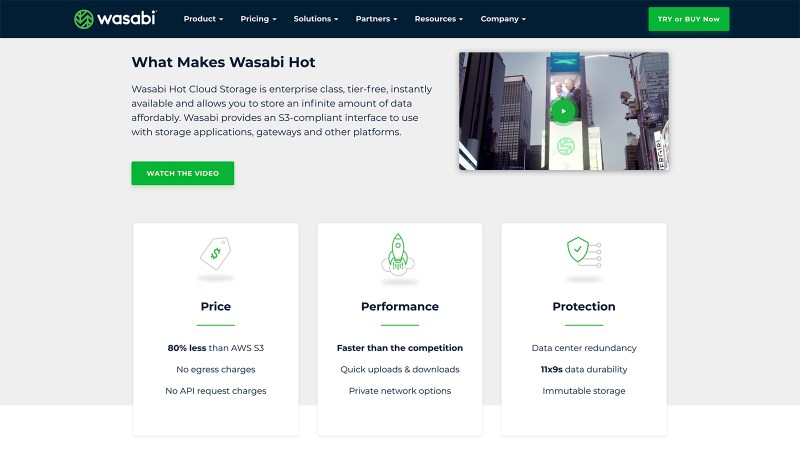 Wasabi’s pay-as-you-go pricing model is $6 per TB per month. The company also offers a reserved capacity storage pricing model with a 30-day storage retention policy that allows customers to purchase 50TBs or more capacity for one-, three-, or five-year terms.

The structure evidently appeals to some companies, as Wasabi says it has over 15,000 businesses storing “hundreds of petabytes” of backup, surveillance, medical imaging, life science, education, genomics, AI and machine learning, television, movie, and government data on its servers. Revenue grew by 5 times in 2019, and Q1 growth that year was in over 40% up from Q1 2018.

The real trick for Wasabi will be maintaining a competitive edge in a cloud storage market that’s projected to grow to $137.3 billion in value by 2025. Beyond AWS, Wasabi counts Google Cloud Platform and Microsoft Azure among its competitors, as well as Cohesity, Datrium, Reduxio, and others. Rival Rubrik, which offers cloud-based data and storage management, has raised over $292 million since launching in 2014.

Western Digital Capital and Prosperity7 Ventures, the diversified growth fund of Aramco Ventures, participated in the extension of Wasabi’s latest funding round.