Heavily rumored since shortly after the release of its predecessor, and accidentally revealed in pre-event leaks of images and basic specs, the Apple Watch Series 4 finally became official today. The company’s next-generation smartwatch features the first major redesign since 2015’s original (“Series 0”) model, including larger bodies, over 30 percent bigger screens, and new internals.

Introducing the new model, Apple COO Jeff Williams described the Apple Watch as an “intelligent guardian for your health,” and said that it was adding new dynamic watch faces that show off the larger display, including fire, vapor, water, and breathe effects. Despite a 35 percent larger screen on the smaller version and 32 percent larger screen on the larger model, it’s thinner than the Series 3, with less total physical volume.

As a result of the new screens, the new Apple Watches have higher resolutions than their predecessors. Extra pixels enable each model to fit more on the screen than before, such that the Watch can now display a watch face with eight simultaneous “complications” — separately tappable icon or text information displays.

Apple has made a number of tweaks to the Series 4’s body. The microphone hole now sits between the side button and Digital Crown, enabling clearer voice sensing, while the speaker has been improved for greater volume. At the same time, the Digital Crown has been modestly redesigned to turn the LTE model’s solid red circle into a thin red circular line and to include haptic feedback with each motion. The side button no longer protrudes as much as it did from the Watch’s body.

The new S4 chip inside is a dual-core 64-bit processor with a new GPU, delivering up to twice the performance of its predecessor. Updated accelerometer and gyroscope functionality enable all-day activity tracking, twice the dynamic range of sensing, and up to 32g of force. New types of workouts are also tracked with the new model. It can also detect falls, and give you an easy route to access the Emergency SOS feature. 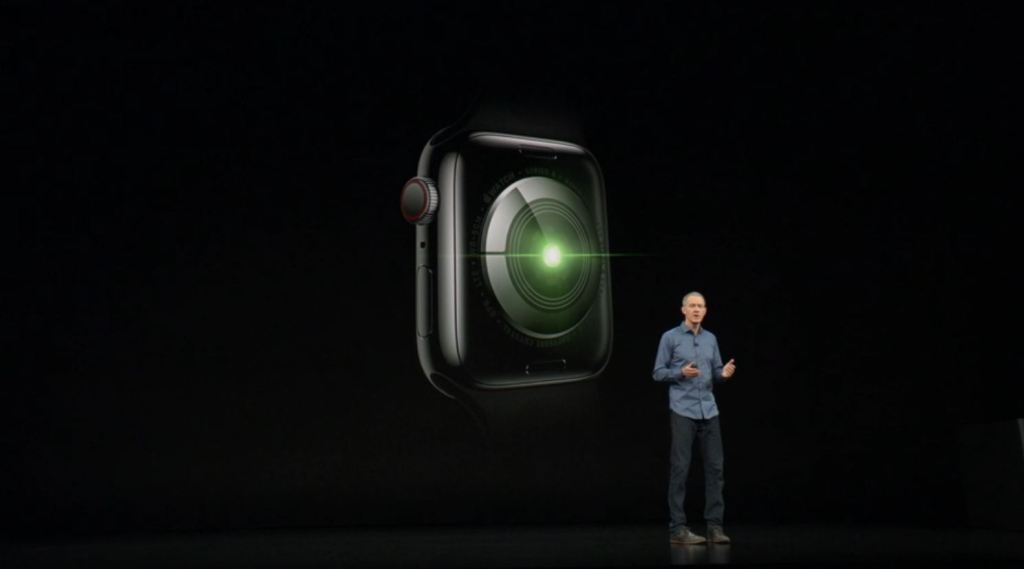 Three new heart rate features are being added, including a Low Heart Rate notification, which is being added to the existing High Heart Rate alert. It can also screen for heart rhythm irregularities that may flag atrial fibrillation, and has electrodes within the new rear sapphire and ceramic crystal that enable taking of a one-lead electrocardiogram, using the Digital Crown as an ECG lead. Apple claims it’s the first over-the-counter ECG product for consumers, though that’s not exactly accurate — Kardia/AliveCor has offered separate accessories for this for years.

Notably, the ECG and heart rate features will be available only to U.S. customers starting “later this year,” and will require separate approvals from other countries — probably unlocked through software updates. 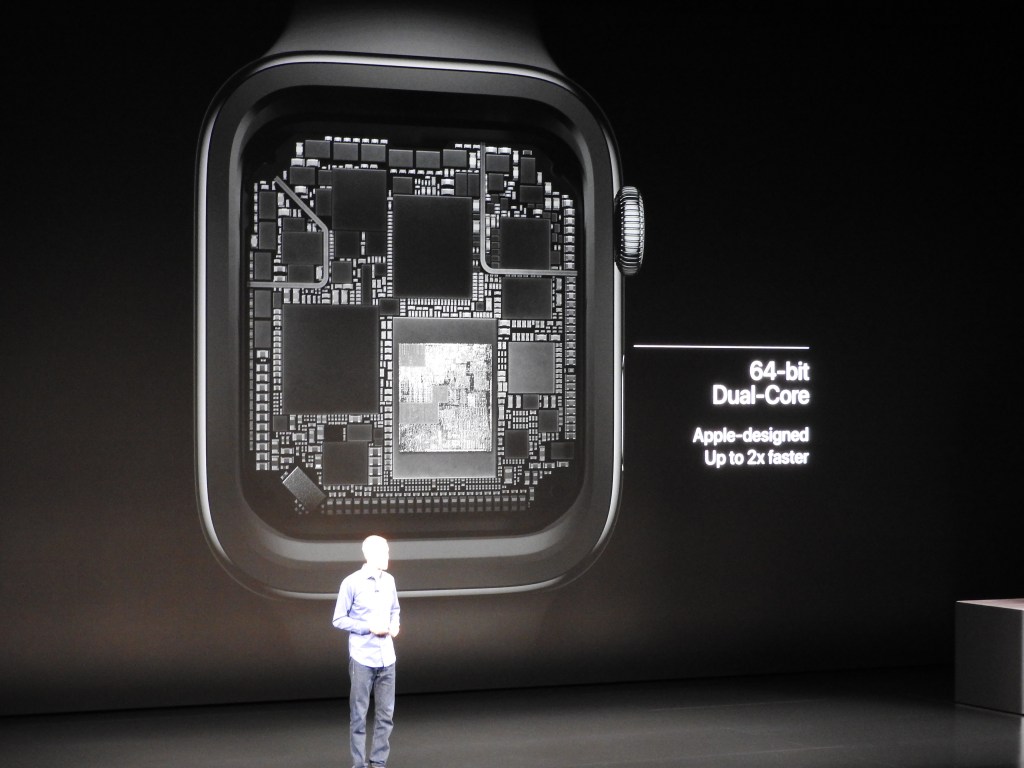 In addition to its health and CPU/GPU improvements, Apple Watch Series 4 also includes Bluetooth 5.0 for the first time, and is claiming “all-day battery life.” Unfortunately, that’s the same promised 18-hour run time as before, albeit now with six hours of outdoor workout tracking. Cellular performance is said to be improved, but without specifications.

For the first time, Apple Watch Series 4 will be available in new casing sizes: Apple has increased the small and large watches from their initial 38mm and 42mm designations to 40mm and 44mm, respectively. Additionally, the new model will come in silver, space gray, and gold aluminum versions, as well as silver, space black, and gold stainless steel — the latter a first for the family. Like the Series 3, separate “GPS” (Wi-Fi/Bluetooth only) and “Cellular” versions with be available.

Apple is introducing a large collection of new bands alongside the Apple Watches today, including new colors of previously established options such as the Sport Band, Sport Loop, Leather Loop, Milanese Loop, Modern Buckle, Stainless Steel Band, Nike Band, and Hermès bands. The new bands come in “40mm” and “44mm” versions, but old bands will continue to work on the new models.