Following Verizon’s October 1 launch of a “fixed 5G” network for customers in parts of four cities, AT&T today said it will be introducing its mobile 5G network “in parts of 12 cities” within the “next few weeks.” That narrows the company’s timeline down to November, just ahead of its self-imposed 2018 deadline for commencing 5G services.

The announcement came during the company’s third-quarter earnings conference call, and caps off two years of 5G trials across several U.S. cities. Reaffirming its commitment to use standards-based 5G — unlike Verizon — AT&T described itself as starting on the path to nationwide mobile 5G service, with the initial 12 cities to be joined by 7 more “by early 2019.” 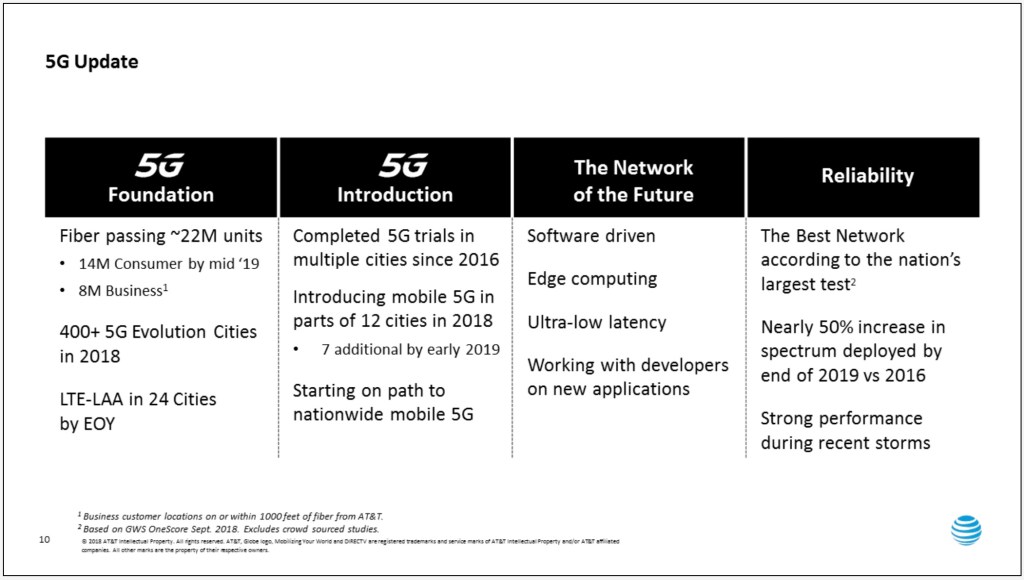 AT&T has already launched what it describes as “5G Evolution” in over 400 U.S. cities throughout 2018, upgrading select towers with wireless technologies that will benefit both late-stage 4G/LTE users and early 5G adopters. The company says 5G Evolution technology will be nationwide by mid-2019 and is already resulting in peak customer speeds of 400Mbps.

Beyond its new wireless hardware, the carrier says its 5G wireless network is backed by fiber cabling capable of reaching 18 million customers now, and 22 million customers by mid-2019. Eight million business customer locations will soon be within 1,000 feet of AT&T fiber, as will 14 million consumers.

Early 5G customers will have a limited choice of AT&T-compatible hardware. The company says it will commence service using standards-compliant mobile hotspot “pucks” capable of up to gigabit speeds, accessible by wirelessly tethered laptops and other portable devices.