Though lawsuits and government investigations into Apple’s iPhone battery debacle multiplied and went international in January, Canada’s government escalated its investigation today, bringing representatives of Canada’s Competition Bureau, Apple, and Primate Labs — the Toronto, Canada-based company that unearthed the issue — to testify before the House of Commons’ standing committee on industry, science, and technology.

Faced with charts from Primate Labs’ Geekbench that showed dramatic performance reductions across multiple iPhones, Apple admitted last December that it had been slowing down certain iPhones based on declining battery performance. The company publicly apologized, then dropped the price of replacement iPhone batteries to $29 in the U.S. ($35 in Canada) through the end of 2018. 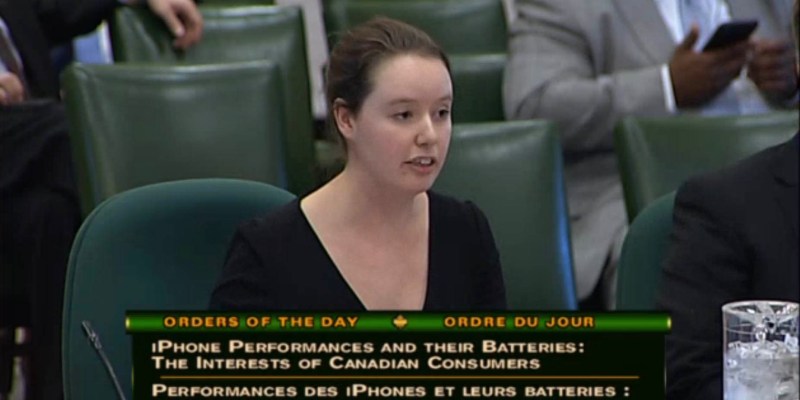 The members of parliament (MPs) seemed primarily concerned with ensuring that Canadian customers were being treated fairly by Apple, both prior to and after the company’s admission. Representing the Competition Bureau, Alexa Gendron-O’Donnell (above) explained that the primary interest was in protecting consumers from false or misleading advertising, and that a U.S. company operating in Canada must comply with Canadian civil and criminal laws, including the truth in marketing requirements of the Competition Law. Responding to questions from the MPs, she noted that based on Competition Bureau policy, she wasn’t able to comment on whether the agency was already dealing with Apple in this case. She also noted that there was not yet a law explicitly prohibiting planned obsolescence in Canada.

John Poole of Primate Labs testified that although his company had received consumer complaints of slowdowns in iPhones, he originally believed that they were attributable to an issue with iOS 11. However, a Reddit post noting performance improvements after a battery replacement led Primate Labs to investigate further. Based on additional research, Poole determined that the cause of the slowdown was introduced in iOS 10.2.1, though he didn’t know exactly why.

MPs asked Poole whether the issue affected Canadian and U.S. iPhones differently — after checking Geekbench data, and to the best of his knowledge, Poole said he didn’t think so. They also asked whether Poole felt the battery issue was evidence that Apple engages in planned obsolescence, and Poole said that while he originally might have thought so, Apple’s explanation that it slows devices rather than letting them become unstable made more sense. Still, he felt Apple’s lack of transparency in the matter was an issue.

Poole was also asked whether Apple had misrepresented the iPhone to the public. Poole opined that the public knows Apple’s claims tend to be for “up to” and ideal case scenarios but that consumers wouldn’t have reasonably expected their devices to get slower over time due to battery issues. Additionally, he mentioned that Apple representatives at retail stores would routinely tell people nothing was wrong with their batteries. 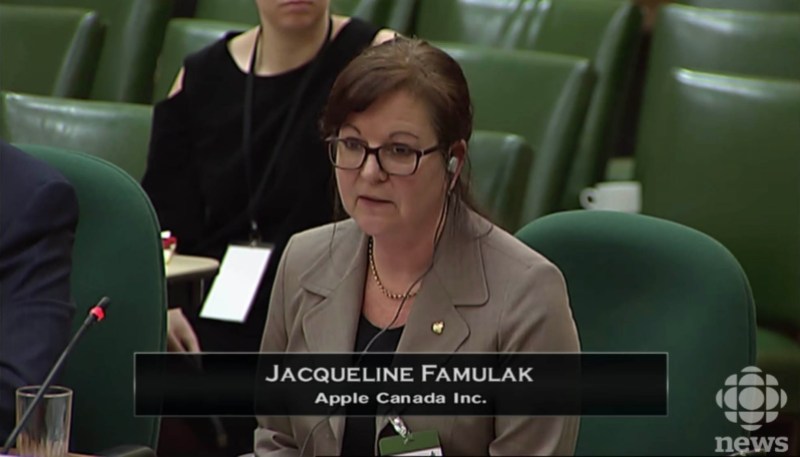 In a separate panel, Jacqueline Famulak and Simon Potter represented Apple Canada, reading from prepared remarks before answering questions. Speaking as Apple Canada’s manager of legal and government affairs, Famulak explained Apple’s prior public statements on battery performance, saying that the company’s power management software was designed to enable customers to keep using flagging devices, rather than forcing them to replace phones that would otherwise face the risk of unexpected shutdowns. She said that software updates always come with a “readme note” that the customer can read before installation and that the 10.2.1 note disclosed the power management solution. Beyond offering discounted batteries as a remedy, she mentioned that the latest version of iOS includes battery management tools.

The MPs aggressively questioned Famulak, noting that Poole’s work had seemingly established that unexpected shutdowns can happen at 30 percent battery life, yet Apple’s slowdowns can begin at 70 percent remaining battery power. They wondered why — if Apple never wanted to degrade the user experience — it slows phones before they hit that 30 percent point? Famulak said that if other conditions are established, such as a very low temperature or chemical aging of the battery, the phone would manage its power and slow down even if it wasn’t at 30 percent. She later said that the 30 percent number wasn’t necessarily accurate.

Another MP asked Famulak what Apple is doing to educate customers about the problem. She responded that the company has put out statements, adding that Apple is still selling the affected models and has not pulled them from the market. The MP said the notice of a battery issue isn’t prominently displayed on the company’s website and that he wouldn’t have known about it but for news reports.

In a particularly testy exchange, MP Brian Masse asked Famulak why she thought the governments of so many countries were investigating Apple if there wasn’t any cause. Famulak responded that she didn’t believe Apple had done anything wrong and couldn’t speak to what other countries were alleging.

When Famulak was asked whether Canadians would receive the same remedies offered to consumers in other countries, Apple counsel Simon Potter attempted to cut the line of questioning off, suggesting that it was not appropriate to ask a company to make a reciprocity commitment when inquiries from other countries hadn’t been resolved. “With all due respect, you’re our witness here,” said Masse, “and our chair will decide what’s appropriate or not appropriate. And I believe that’s a fair question.” The chair opted to move along rather than press Apple on the point.

MP Nathaniel Erskine-Smith asked whether Apple’s initial lack of disclosure to consumers regarding its decision to slow down their iPhones was inadvertent or intentional. Famulak said that Apple had done nothing wrong and had only apologized because consumers weren’t hearing the information directly from the company. When pushed further, she said that the slowdown nondisclosure was unintentional, at which point Erskine-Smith called for Apple and Apple Canada to disclose its internal communications regarding the topic. When Potter refused, Erskine-Smith noted that they could subpoena Apple. Again, the chair intervened to move things along.

Erskine-Smith then asked about the amount of revenue Apple was making from battery replacements and whether the company was prepared to compensate customers who replaced their slowed phones due to Apple’s material nondisclosure. Potter said that there are 50 class actions in process in the U.S. and four in Canada, at which point remedies would be determined.

MP Masse’s final question was whether this incident was a one-off or whether there were either earlier or more recent situations in which the company has failed to disclose slowdowns or other performance restrictions on a device. Famulak responded by saying that there are always features being evaluated and disclosed in readme notes. Masse pressed further, but Famulak deflected the question. The chair closed the event by telling Apple that he loves the company’s products but was very disappointed by the experience of his own phone slowing down and by the company’s lack of communication when he went to a store to try to understand what was going on.