If there’s one thing consumers don’t like, it’s being spammed with calls, instant messages, and texts involving promotions and other forms of marketing chicanery — especially when they haven’t given consent.

What may be even more annoying, however, is turning on your phone to find a survey has been baked directly into the software. Nevertheless, a number of mobile phone makers seem to be employing this tactic in recent times as they seek to garner “valuable feedback” from their users.

The latest culprit is HMD Global, the business vehicle established specifically to create and market Nokia-branded mobile devices. The Finnish company has unveiled a number of mobile phones over the past nine months or so, from cheap feature phones and mid-range smartphones all the way up to yesterday’s Nokia 8 flagship. Arguably — and, perhaps, sadly — HMD Global’s most notable achievement to date (until yesterday’s Nokia 8) was the excitement it generated by bringing back the classic Nokia 3310, slightly reimagined for the modern era with Bluetooth and a sleeker design.

But shortly after I turned the Nokia 3310 on, and before a SIM card was inserted, the phone served up a little message — a survey. It read:

Your opinion is very valuable to HMD Global, so please tell us what you think of your new phone. If you would like to take part in this…[hit] ‘OK’ or ‘Later.’

Clicking “OK” brought up the first question, which asked how likely I was to recommend this phone to a friend or colleague. 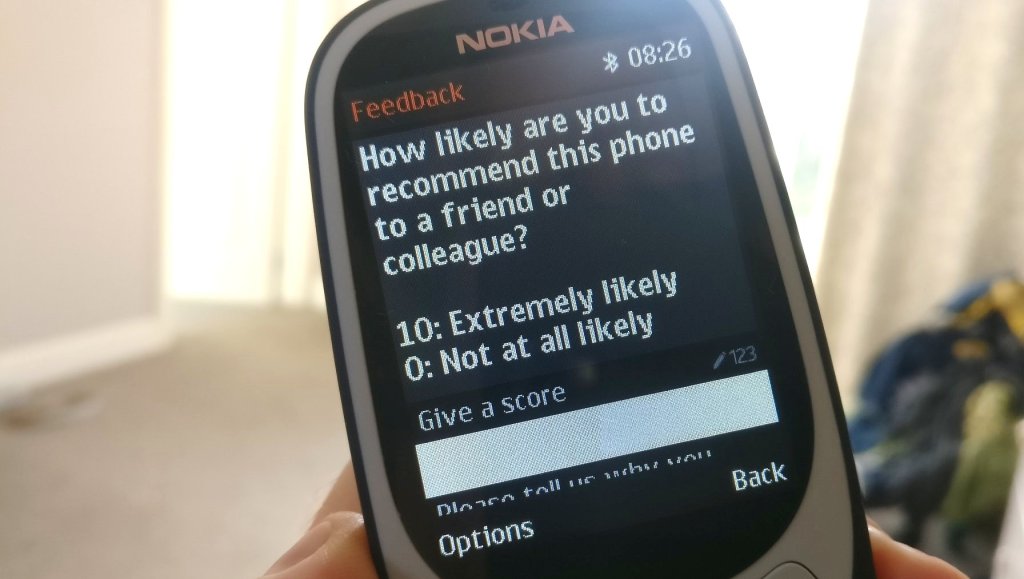 The survey doesn’t offer an obvious way to dismiss it permanently, merely presenting the user with two options — agree or postpone. But the fact that the survey was baked into the very fabric of the phone at all was something of a surprise.

Chinese smartphone giant OnePlus, creator of some fantastic phones, including the recent OnePlus 5, was caught engaging in similar antics recently too, when some OnePlus 5 owners reported receiving push notifications requesting that they take part in a survey… to win a OnePlus 5. This followed a number of other “promotions” that were dispatched by push notifications to earlier OnePlus models to promote the upcoming OnePlus 5 launch.

In its explanation about sending out surveys via push notification, OnePlus said:

Feedback from our community has always been at the heart of our product decision making and as part of this feedback loop, OnePlus 5 users have been sent a notification to share their personal experiences about the OnePlus 5 with an option to opt-out. This is to help with the continuous improvement of our products and to better understand our community of users.

Other companies have been caught sending ads to users’ devices over the years, including HTC, which pushed a Fantastic Four promotion back in 2015, and Samsung, which has sought to promote its new flagships through this mechanism.

In the case of HMD Global’s survey, those of a calm disposition will no doubt argue that it’s just a harmless feedback form and is hardly the end of the world. This is true, it is very much a “first world problem.” But someone who has paid for a product shouldn’t have surveys forced upon them in this way.

HMD is committed to understanding the customer experience and this optional survey provides valuable feedback from consumers. The survey can be dismissed by pressing the back button.

At the time of writing, HMD Global hasn’t confirmed whether similar surveys would be included on its latest flagship Nokia 8 device. But VentureBeat has seen reports elsewhere of surveys being included on other HMD Global Android phones, including the Nokia 6, so it would not be all that surprising if this was standard practice across the company’s devices.