Until the U.S. government approves T-Mobile’s acquisition of Sprint, the third- and fourth-place carriers will be launching separate 5G cellular networks with different hardware — and HTC is ready to help kick off Sprint’s 5G initiative this spring. Following a tease by Sprint back in November 2018, the smartphone and VR headset maker today confirmed that it will launch the HTC 5G Hub as its first 5G product, and, as expected, it’s something unique.

In a discussion with VentureBeat, HTC explained that simply “following the herd” and “shoehorning 5G into a phone” doesn’t make much sense to the company at the moment, as 4G already delivers a solid experience for what people do with their phones. Instead, the company wanted to create a “companion device” that will enable multiple devices in different scenarios to receive 5G’s bandwidth and latency benefits as needed.

Unlike typical wireless hotspots, which rest on their backs, the wedge-shaped 5G Hub stands upright while including the guts of a modern Android smartphone: a 5-inch touchscreen, stereo speakers, a Qualcomm Snapdragon 855 processor, and a Snapdragon X50 5G modem. While small enough to fit in a backpack, the housing also contains a 4G modem, separate 4G and 5G antenna systems, and a 7660mAh battery with enough power to deliver all-day connectivity to multiple devices.

HTC told VentureBeat that the 5G Hub was designed to serve several purposes. It can be a wireless hotspot capable of hosting up to 20 clients at once, a standalone entertainment system, or a convenient way to bring Android apps — including anything from Netflix videos to games — to any TV. Depending on your needs, it can serve as a mobile office, replace a home broadband modem, or play 4K videos on your choice of display. 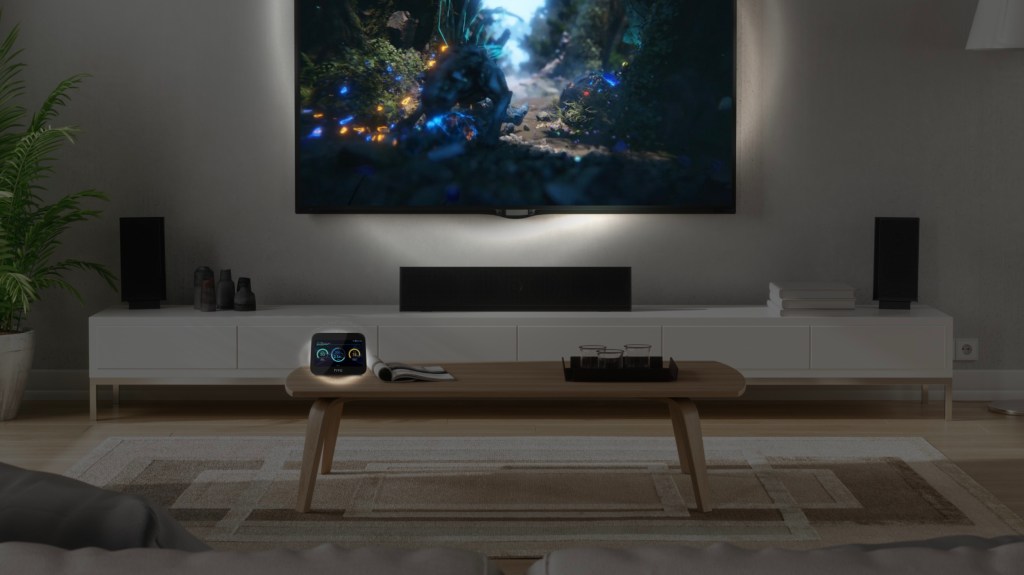 With 4GB of RAM and Android 9 Pie on board, the 5G Hub has enough power to display streamed video and run apps on its own if you’re in a hotel or otherwise on the road, leaving your phone available for communications. There’s also a micro SD slot that lets you expand the 32GB of on-board storage to 400GB or 1TB if you supply the card.

On the cellular side, the 5G Hub will connect to Sprint’s 2.5GHz (band 41) 5G network, initially launching in nine U.S. cities this spring, and will fall back to Sprint’s 4G network in areas outside that coverage. The 5G Hub will not contain millimeter wave 5G hardware or connect to the millimeter wave 5G networks that Verizon and AT&T have already launched; its compatibility with T-Mobile’s network is a question mark. While HTC says that the 5G Hub’s hardware will be capable of supporting “at least gigabit speed,” Sprint hasn’t yet confirmed the speed of its 2.5GHz 5G network, so it’s unclear how much bandwidth users will be sharing.

Most users will access the bandwidth over Wi-Fi, and to that end, 5G Hub includes support for 802.11ac and 802.11ad. Also known as WiGig, the 802.11ad wireless option will allow select devices to really experience 5G speeds, while others connect via the older and slower 802.11ac (Wi-Fi 5) standard. WiGig is already used to offer wire-like data speeds and latency for HTC’s Vive tetherless VR headset accessories, and the 5G Hub could feed 5G data directly to those devices — and future ones, the company notes without divulging specifics.

In addition to including Bluetooth 5.0 support for accessories such as game controllers, the 5G Hub will also include wired connectivity options. On the back is a full-sized Ethernet port for connection to an existing wired or wireless home network, as well as a bi-directional USB-C charging port and a faster dedicated cylindrical charging port. Connecting to HDMI will apparently require a USB-C to HDMI adapter.

Pricing and more specific availability details are yet to come, though HTC hints that the 5G Hub won’t be cheap, as it’s being made for users who want to be on the bleeding edge of technology. The company says the device will be exclusive to Sprint in the United States; Telstra (Australia), Three (UK), Deutsche Telekom (Germany), Sunrise (Switzerland), and Elisa (Finland) will offer it overseas; and China Mobile will release a customized version for mainland China. Sprint is also planning to offer an unnamed Samsung 5G smartphone, potentially the 5G version of the Galaxy S10, in summer 2019.