Instagram had an impressive 2015, full of new developments and new revenue streams. It also courted a little controversy.

Today, the results of a new study from Quintly reveal Instagram’s current state, how businesses are using it, and what’s happening to both follower growth and interaction rates. Spoiler alert: It isn’t great news.

Quintly analyzed 10,000 Instagram  proﬁles during the full year of 2015, and the resulting data reveals some significant trends. What was the one trend that stood out?

“Most surprising for me was the distinct drop in the interaction rate,” Julian Gottke, Communications Manager at Quintly, told me. “Last year we reported Instagram as the ‘king of engagement’ and now the amount of interactions has dropped significantly.”

But before we get to the data, it is worth reminding ourselves what happened at Instagram last year, when it happened, and what the initial reaction of the users was.

In the early part of last year, Instagram made subtle changes to its platform in readiness for what was to come. The first change, in February, automatically looped video content, (much as Vine does). The move was seen as attractive to advertisers — a theme that you’ll see continues throughout the year — despite what those changes might do to user satisfaction.

Then, in March, Instagram opened up the ability for advertisers to create “carousel ads,” allowing people to swipe left to see additional content. These new story-telling units were initially rolled out on a limited basis.

Later that month, Instagram launched the first of two new apps for 2015, called Layout. Layout is Instagram’s simple “collage” app and helps users create multi-image photos quickly and easily. Subsequent updates to Layout have allowed it to reach the level of functionality enjoyed by the third-party apps it was designed to supplant. Later in the year, Instagram launched Boomerang, which creates one-second videos that “bounce” back and forth.

Other user-focused updates in March and April included new filters, new photo editing capabilities (such as “fade”), and the ability to use emojis in hashtags. You could argue that the latter has been used by the community to create underground photo collections with questionable content. I won’t link to them here, but unless you know what you’re getting into in advance, I’d avoid searching for “hashtag aubergine-emoji.”

One of the biggest Instagram updates of the year came in June, with new search and discovery features that were designed to surface new trends and events. To date, these trending results only work in the United States. In August, we saw another significant shift. Instagram’s famous 1:1 square photos were no longer the only aspect ratio available, as the photo-sharing network opened up all aspect ratios to its users.

Bring on the ads

But the biggest changes were still to come. The company announced on September 30 that Instagram Ads would be pushed to everyone around the world. Video ads could be up to 30 seconds long. The other big change? The advertising floodgates opened three days before the global push for advertisers, as Instagram started serving ads in the stream once every five or six photos. It was a massive shift in ad cadence — before the change you would be lucky to see a sponsored photo or video once every ten to twenty minutes of scrolling.

The result? Users hated it. I know — I did the research. Six out of 10 daily Instagram users — the very people who love the app — were unhappy with the change in cadence. In fact, the number of “1-star” user experience responses I measured across almost 1,000 Instagram grew by a whopping 180 percent.

Other changes since the cadence update have been mainly focused on advertisers and on controlling the platform, rather than on users. Instagram opened up carousel ads to all comers. Advertisers can now create 60-second ads. And the company tightened up control of its API too. The only user-focused change after September was a welcome one — the ability to switch between multiple accounts.

So now that the scene is set, what does the data say?

Instagram is still one of the only authentic social networks available, since it doesn’t allow posting via its API. Whether you’re a brand or an individual, you have to post using the app. You can’t automate that process with a third-party solution. But that’s not stopping marketers from getting their ‘gram on.

Brands are catching on to the network, and Quintly’s report shows that marketing-led post frequency has increased 116 percent, from 0.84 posts per day to an average of 1.04 posts per day.

Whether you think brands catching on to Instagram is a good thing or not is subjective. For Instagram, the more brands that post, the better, since the opportunity to convert them to paying advertisers is higher. For regular users, the fact that the brands and marketers have arrived might be enough to turn them off.

The real bad news, however, is that follower growth — and interaction rates, in particular — are not only down, but are continuing to fall.

While that could be due to the platform maturing, the numbers still paint a worrying trend.

Follower growth is slowing, and the pattern shows this will continue throughout 2016. I must note that the average profile still sees monthly follower growth of 16 percent, but at the current rate, follower growth will fall off the cliff within the next 24 months.

Nailing down the exact reason for this is hard. It could be that those with a larger following have attracted bots and fake profiles, and those faux accounts won’t naturally interact (a perennial Instagram problem). Or it could be that — shudder to think — some of the accounts that have large followings grew their numbers using non-organic methods. 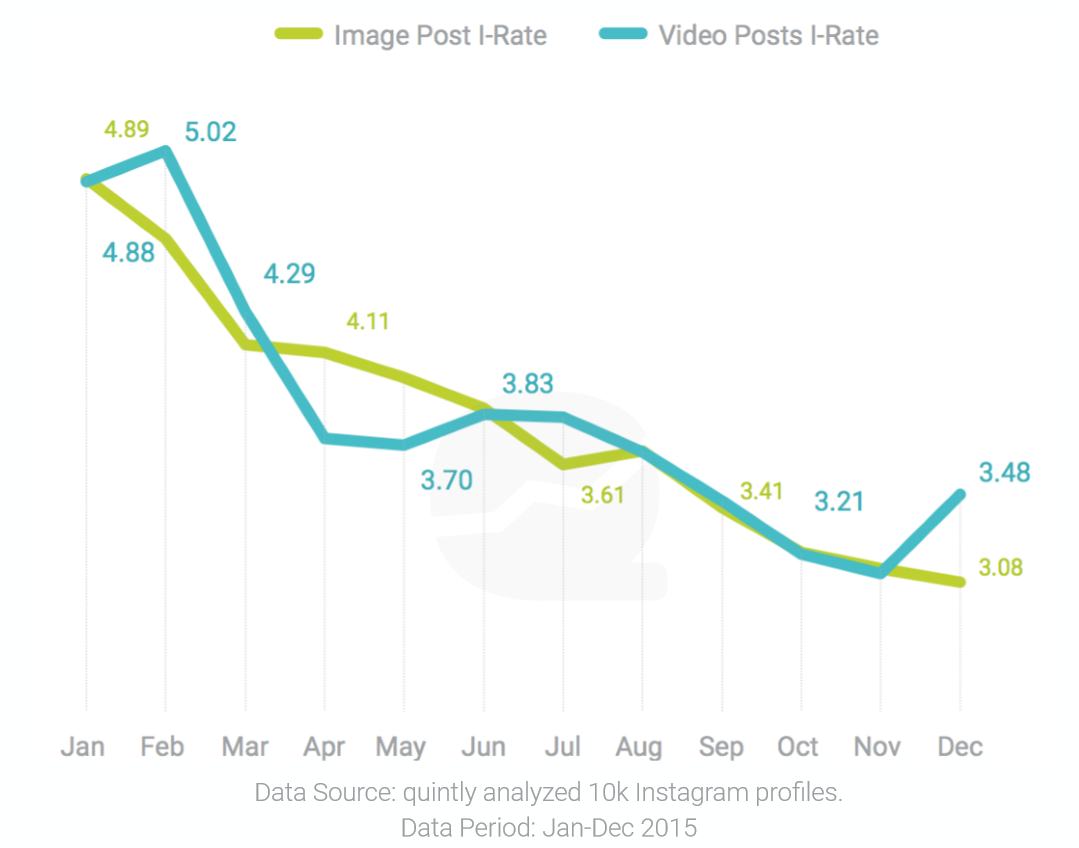 Instagram has seen incredible user growth in the last five years — it reached 400 million users in September 2015. It is natural to explain some of the trends in Quintly’s analysis of 10,000 accounts by suggesting they’re a result of increased maturity. But  aligned with the ad-focused changes Instagram has made to its platform in the twelve months of 2015 and combined with the user reaction to its increased ad cadence, you could also argue that the drop in interaction rates is down to more than just the problems that come with age.

“Instagram is and will continue to be a meaningful network for brands and their storytelling,” Gottke said. “Through its visual characteristics, it urges brands to be more creative and thus publish more interesting and less obtrusive content. This makes Instagram pleasant to use for consumers and from a brand’s point of view, the interactions will most likely stay higher compared to Facebook.”

Quintly’s full report, including breakdowns of all its data points by follower size groups, is available today on its website.