Samsung’s foldable phone-tablet hybrid Galaxy Fold suffered catastrophic failures due to a 7mm gap in the screen bezel — a hole that enables the screen to flex but also allows debris to enter the housing, according to a report from teardown specialist iFixit today. That unusual design choice dramatically limited the Fold’s longevity, the firm said: “[S]hould something accidentally enter, it’s curtains for the screen.”

Originally scheduled for release on April 26, the Galaxy Fold was set to be the first folding phone-tablet hybrid from a major manufacturer, following the January debut of Royole’s plasticky FlexPai with a substantially metallic housing worthy of the Galaxy name. But Samsung apparently struggled with the Fold’s screen covering, choosing to use sheets of thin plastic rather than traditional glass to enhance the display’s flexibility. Early testers found that the thin plastic looked and peeled right off like temporary screen protectors, leading to calls for a release delay.

iFixit’s teardown suggests that the Fold’s bezels are atypically delicate. The report notes that they provide barely 2mm of display coverage yet “clearly aren’t flexible enough to cross the fold,” and suggests that they “may peel over time.” 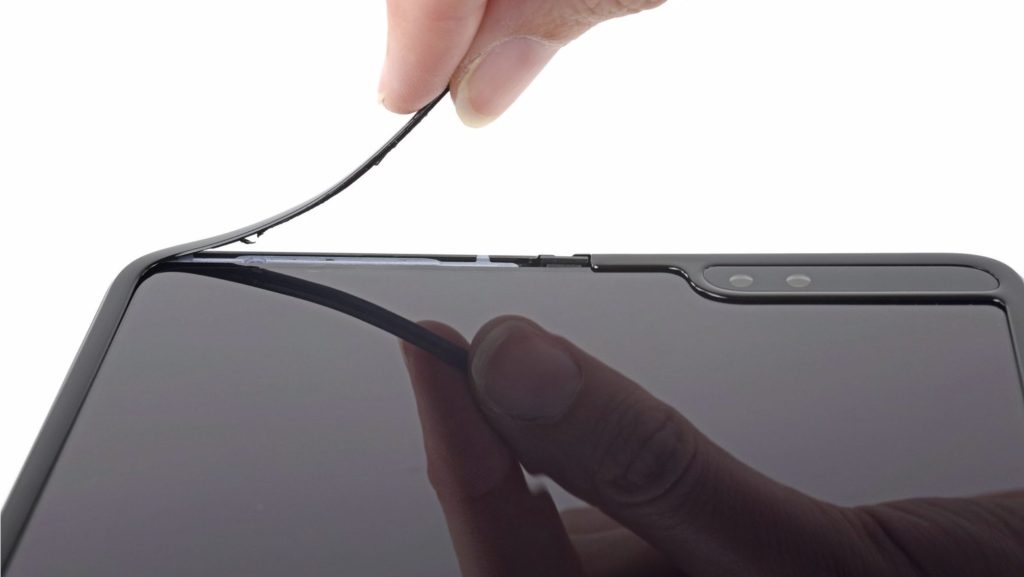 The bigger problem, however, was that the screen was capable of being easily damaged even if the film hadn’t been removed. Reviewers noted that the screen’s soft covering appeared dented and bubbled or bulged in places after ingress from debris. In some cases, the flexible screen failed partially or entirely after only days of use.

This gap may have been an engineering oversight as the team focused on perfecting the mechanical movement of the device’s folding hinge, which iFixit said has no “hinge ingress protection.” In announcing an indeterminate delay of the Galaxy Fold’s release, Samsung said that its initial review of damaged devices found substances inside the housings and possible hinge damage.

Samsung has not set a new date for the Galaxy Fold’s release but has promised to announce a timeline within weeks. While a report late yesterday said some AT&T customer service representatives claimed the device would ship in June, Samsung has not confirmed any timing and was still in the process of gathering test units for evaluation this week.