Sphero, the nine-year-old Colorado company best known for app-enabled balls that teach coding and perform cool tricks, this week unveiled its newest product: RVR. The driveable, fully programmable robot is now available on Kickstarter, ahead of an expected September 2019 ship window, with pledge levels starting at $199 ($50 off the projected $250 retail price).

RVR, like Sphero’s Sprk lineup, is decidedly geared toward hobbyists and educators. Its transparent chassis exposes the wealth of electronics within, including 10 individually addressable LEDs, high-resolution 20-pole magnetic encoders, and “high-precision” gears with vibration and noise dampening. Sphero says the rover’s wide treads and steel-reinforced axles are grippy enough to traverse steep angles and rough surfaces, and that its roll cage — which protects sensitive components like the removable battery (which recharges via a USB Type-C port) and compact motor — can withstand abuse from overzealous coders and tots alike.

RVR features a universal expansion port (4-PIN UART), a USB-A port, and a suite of onboard sensors — including a color sensor, a light sensor, IR, magnetometer, accelerometer, and gyroscope — along with a nine-axis inertial measurement sensor (IMU) that can receive and send signals to interact with other Sphero robots. (The light and color sensor can similarly be used to exchange data.) This expansion port can connect to third-party development boards like Raspberry Pi, Micro:Bit, and Arduino. Through a partnership with online retailer SparkFun electronics, Sphero’s planning to offer build kits with cameras, GPS, and other accessories that enhance RVRs functionality.

“[RVR] is truly a professional-level robot, without the hefty price tag,” said Adam Wilson, Sphero’s cofounder and chief creative officer. “By connecting your hardware of choice to the expansion port, the customization possibilities are endless and entirely up to you. For example, you can hook up a camera to RVR and program facial recognition to [dance] every time your best friend walks by.”

RVR is compatible with Sphero’s Edu, its phone- and tablet-based dev collaboration platform, and the company says it’ll roll out a wave of lesson plans and programs to coincide with the rover’s launch. The Edu team works with more than 30,000 educators in more than 20,000 schools around the world, Sphero says, adding that more than 1.3 million kids have progressed through Sphero Edu curricula.

“RVR is the kind of robot I wish I had growing up,” Wilson said. “For makers, developers, and anyone who loves to build things, RVR’s advanced capabilities bring to life everything that makes coding exciting. That creative experience is at the core of why we first started Sphero.” 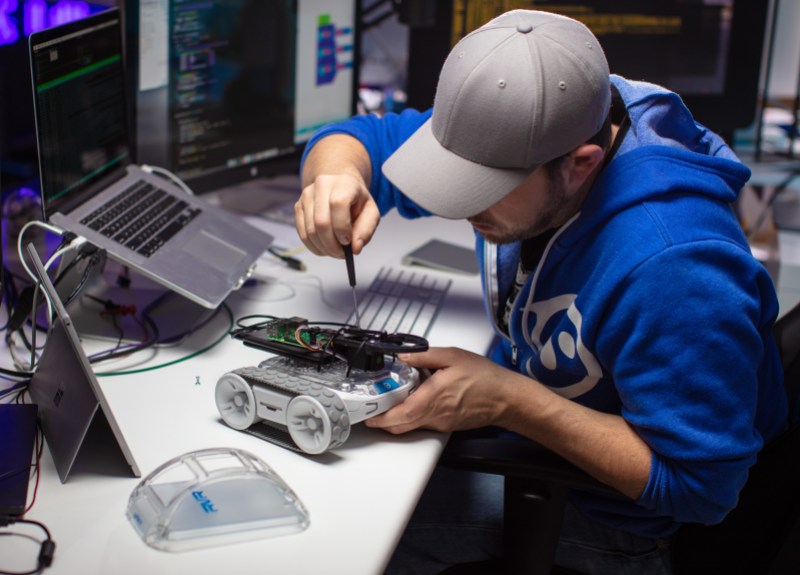 Folks who back RVR on Kickstarter within the first week will be entered in a drawing for an all expenses paid trip to Sphero’s Boulder headquarters, where the winner will compete in an all-day RVR hackathon on March 14, 2019. Additionally, SparkFun says it’ll match the first 50 units purchased with a donation of 50 RVRs to schools.

RVR’s debut follows on the heels of Sphero’s Bolt, a beefed-up version of the company’s Sprk+ that boasts a programmable 8 x 8 multicolor LED matrix and an infrared sensor, and Specdrums, app-controlled rings that turn color into sound. (Sphero acquired the Kickstarter-backed Colorado company behind Specdrums in June.) They have come as Sphero redoubles its commitment to the STEAM (Science, Technology, Engineering, the Arts and Mathematics) market after choosing not to pursue new licensing deals with Disney.