Exactly one year ago, Waymo, the self-driving vehicle venture of Google parent company Alphabet, launched Waymo One, which it characterized at the time as the world’s first commercial autonomous taxi service. Waymo One enabled select customers — initially only those who were involved in the early stages of Waymo’s trial program — to hail a robo-taxi, beginning in Phoenix, Arizona and surrounding metro areas.

Waymo One hasn’t grown far beyond Phoenix geographically, but it’s moving incrementally forward toward a broader launch in the continental U.S. To this end, a Waymo One app for iOS launched this morning in the App Store, marking the first time it’s been made available on a platform other than Android.

All U.S.-based iPhone users — not just those participating in Waymo’s Early Rider pilot — can search and download the Waymo app for iOS. However, they’ll have to apply to a waitlist after creating an account, and only once they’re accepted from the waitlist will they be able to hail a ride from the Metro Phoenix area. 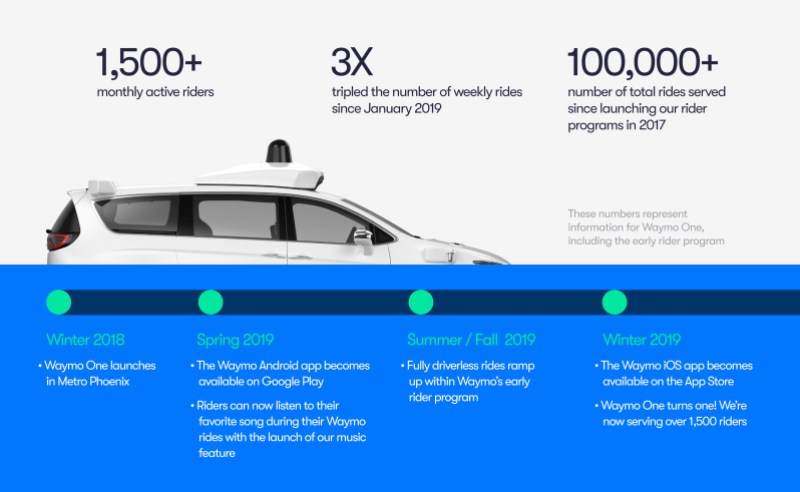 The majority of customers will continue to be invited to join the Early Rider program first before moving into the public arm of Waymo One, said Waymo chief product officer Dan Chu. “In the last year, we’ve accomplished a lot and learned even more,” he wrote in a blog post. “Through customer surveys and feedback, we hear a lot about what our riders expect from self-driving technology and how we can continue to improve our service to meet those expectations.”

Like the app for Android, which launched publicly in April, Waymo One for iOS hails rides from almost any Phoenix-area location 24 hours a day, seven days a week. It prompts customers to specify both pickup and drop-off points before estimating the time to arrival and the cost of the ride, and like a typical ride-hailing app, users can enter payment information and rate the quality of rides using a five-star scale.

Features recently added to the Android app are present and accounted for in the iOS version, including a simplified ordering flow and better recommended pickups and drop-offs as well as an option to honk a car’s horn from the app. In the future, Chu says that Waymo will “improve” its product offering by introducing “[new] capabilities” into the service. The past year has seen additions like music playback courtesy of Google Play Music integration and a dark mode to make the touchscreens within cars’ cabins dimmer at night, plus a zoom feature that lets riders take a closer look on the screen at what their car is seeing and a map view that allows them to see where they are along their route.

“When we think about Waymo One in 2020, our main focus will be responsibly ramping up our driverless offering to more and more riders in Phoenix across both our early rider program and public service,” a Waymo spokesperson told VentureBeat via email. “We’ll continue to drive in a variety of other places, from Michigan to Washington to California, to train our cars in different driving environments and conditions to continue to expand our capabilities and learn about how our cars fit into the transportation landscape there.”

Waymo declined to share the exact number of customers who’ve ridden in its cars to date, but it said that over 1,500 people are now using its ride-hailing service monthly and that it’s tripled the number of weekly rides since January 2019. Additionally, it says that it’s served over 100,000 total rides since launching its rider programs in 2017.

Waymo previously shared that it has over 600 vehicles in its Waymo One fleet, and that its cars have collectively driven 10 billion autonomous miles in simulation and 10 million real-world autonomous miles in 25 cities, including Novi, Michigan; Kirkland, Washington; and San Francisco. Recently, it began mapping the streets of Los Angeles to study congestion, and Waymo expanded testing to highways in Florida between Orlando, Tampa, Fort Myers, and Miami.

Waymo is poised to expand the size of its operations drastically in the coming months. It’s on track to add up to 62,000 Chrysler Pacifica minivans to its fleet, and it’s signed a deal with Jaguar Land Rover to equip 20,000 of the automaker’s Jaguar I-Pace electric SUVs with its system by 2020. (A few of the I-Paces are currently undergoing testing on public roads in San Francisco.) Waymo is also testing its autonomous stack on Peterbilt trucks in the San Francisco Bay Area, Michigan, Arizona, Georgia, and Metro Phoenix freeways (as well as I-10 between PHX and Tucson). The company plans to grow trucking and commercial delivery applications of its technology as part of a project known internally as Husky.

Waymo has competition in Yandex, Tesla, Zoox, Aptiv, May Mobility, Pronto.ai, Aurora, Nuro, and GM’s Cruise Automation, to name just a few. Daimler last summer obtained a permit from the Chinese government that allows it to test autonomous cars powered by Baidu’s Apollo platform on public roads in China. Beijing-based Pony.ai, which has raised $214 million in venture capital, in October launched a driverless taxi pilot in Irvine. And startup Optimus Ride built out a small autonomous shuttle fleet in New York City, becoming the first to do so.