AT&T has announced plans to acquire cybersecurity company AlienVault. Terms of the deal were not disclosed.

Founded in 2007, AlienVault offers a number of tools for detecting and responding to security threats through its Unified Security Management (USM) platform, while its Open Threat Exchange (OTX) platform serves as an online community where security professionals and researchers can share their latest findings and threat data. 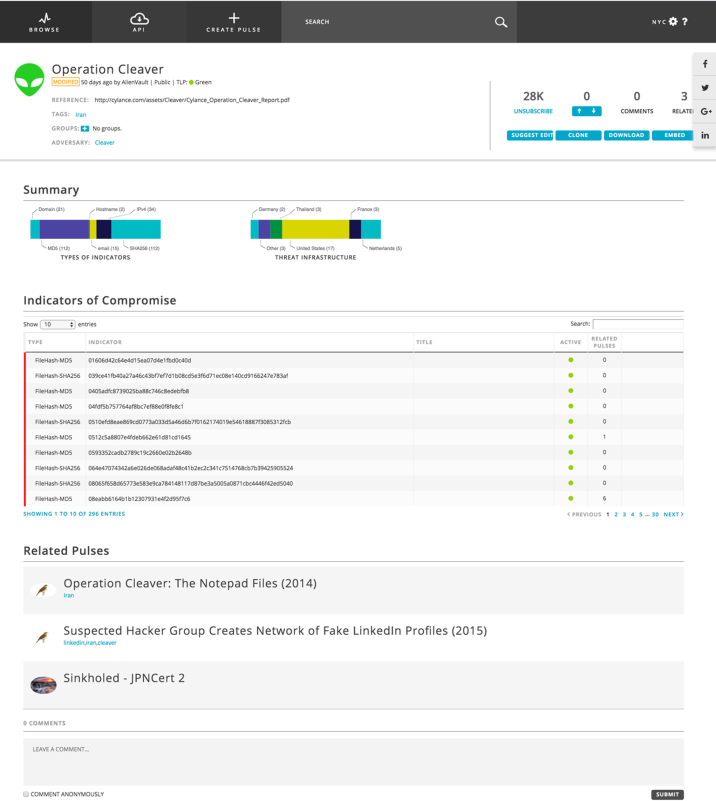 The San Mateo-based company had raised around $120 million since its inception, with big-name backers including Intel Capital, Kleiner Perkins Caufield & Byers, and GGV Capital. Reports last year suggested that AlienVault was gearing up to go public, though CEO Barmak Meftah was noncommittal as to a timeline.

“The executive bench is full, and I’m not going anywhere. So sometime in the future, hopefully not too far in the future, we’re thinking about an IPO,” he told Silicon. “It’s gone from pursuing it in the background to being semi-active.”

Rival cybersecurity firm Zscaler did IPO this year, as did Carbon Black, while a bunch of similar startups had been talked up as IPO candidates this year. AlienVault, however, has elected to be sucked into one of the world’s largest telecommunication companies instead.

“This deal accelerates our ability to deliver on the AlienVault mission, which is to democratize threat detection and response to companies of all sizes,” Meftah said in a press release announcing the deal.

As a result of its acquisition, which will see AlienVault’s security personnel joining AT&T, the telecom giant said it will be able to expand its existing security offerings for enterprises to smaller businesses. “AlienVault’s innovative technology and security talent will help accelerate AT&T’s vision of enabling organizations of all sizes with effective cybersecurity solutions,” the company said, before adding that it will continue to invest in AlienVault’s USM and OTX platforms.

The global cybersecurity industry is expected to be heavily understaffed in the coming years, and with a growing number of high-profile data breaches and cyberattacks, we’ve seen a spike in investments across the cybersecurity realm. In the past month alone, AI-powered security platforms Cylance and CrowdStrike raised $320 million between them, while earlier this year PhishMe was acquired for $400 million by a private equity consortium and Splunk snapped up security automation and orchestration platform Phantom for $350 million. Today,  Mimecast announced it had acquired Ataata, a cybersecurity training and awareness platform.

“Regardless of size or industry, businesses today need cyber threat detection and response technologies and services,” said AT&T Business CEO Thaddeus Arroyo. “The current threat landscape has shifted this from a luxury for some to a requirement for all. AlienVault’s expertise in threat intelligence will improve our ability to help organizations detect and respond to cybersecurity attacks. Together with our enterprise-grade detection, response, and remediation capabilities, we’re providing scalable, intelligent, affordable security for business customers of all sizes.”

AT&T said it expects the acquisition to close in Q3 2018.