Today at Facebook’s annual F8 developer summit in San Francisco, the company launched a redesign of its mobile and web apps — code-named FB5 — built around “private interactions” and “community.” And for the first time in years, it updated its logo.

Every user in the U.S. will gain access to the refreshed clients soon, with users in other regions to follow in the coming months. The redesign on mobile has been happening in stages, Facebook says, while the desktop redesign will begin testing in the next few months.

CEO Mark Zuckerberg called it “the biggest change to the app and website in the last five years.”

The massive revamp — the “sum of hundreds of details” rather than just a few major changes, according to Zuckerberg — makes it easier to find and connect to relevant Facebook Groups with streamlined suggestions, browse, and discovery tools. It features clean lines and ample white space, and lets users post to any of the social network’s tens of millions of active Groups directly from the homepage. Moreover, it prominently features Groups in the left-hand sidebar on desktop. 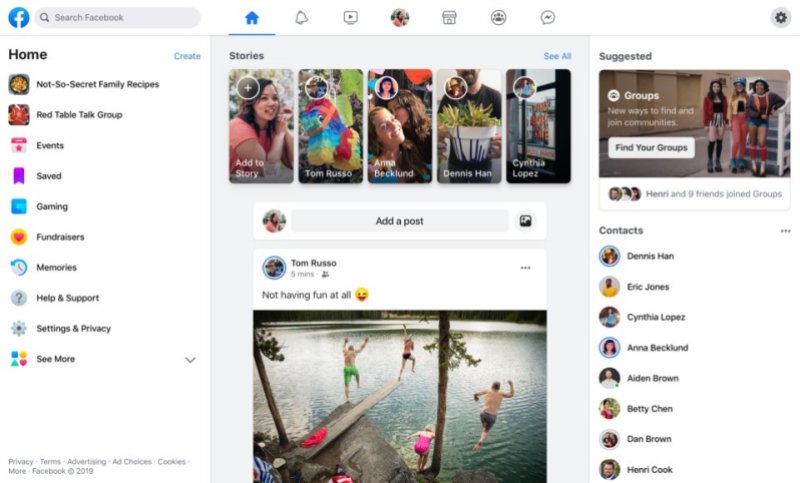 There’s a new Meet New Friends feature that lets folks reach out to strangers from Groups they’re a part of or with whom they share interests, and on Marketplace — Facebook’s peer-to-peer shopping hub — users can make payments and handle shipping directly through the social network. (Facebook says it’s exploring ways to let buyers ask questions and place orders of Facebook Live streamers without leaving the live broadcast.) Also new: a local Events tab that shows what’s nearby, including businesses and Groups.

Elsewhere, within job-seeking Groups, there are new templates for job ads. Gaming Groups gained a chat feature that lets members create subthreads for topics they have in mind. And members of Health Support Groups can now ask admins to “post on their behalf in order to protect their privacy around sensitive topics.”

Facebook also announced today that Facebook Dating, its eponymous dating service, is opening in 14 more countries: Philippines, Vietnam, Singapore, Malaysia, Laos, Brazil, Peru, Chile, Bolivia, Ecuador, Paraguay, Uruguay, Guyana, and Suriname. That brings the total country count to 19, and it should launch in the U.S. before the end of the year.

Alongside the geographic expansion, Facebook’s rolling out Secret Crush, a feature that connects up to nine strangers and friends-of-friends. If they’ve opted into Facebook Dating, they’ll get a notification from which they can optionally start a chat on Messenger.

“It’s no surprise that the fastest way we’re all communicating online [is through] private messaging in small groups, and through Stories,” added Zuckerberg. “So that’s why I believe that the future is private. As the world gets bigger and more connected, we need that sense of intimacy more than ever.”