Citymapper, if you didn’t know, is a mobile app that rose to prominence in London for its user-friendly interface that combines multiple transport options to help users find their way from A to B based on their preferred criteria. For example, the app may give the quickest option using a combination of train, tram, and bus; or, if you’ve already invested in a rail card, it will give you train-only options; or it will also suggest a “rain safe” option that minimizes the amount of time walking between transport options during a torrential downpour.

Since its inception in 2011, Citymapper has rolled out to dozens of conurbations globally, including New York, Boston, San Francisco, and Tokyo, and it has raised around $50 million in venture capital funding.

The London-based startup has been at the center of much speculation over its future direction and how it plans to grow — for many, it is a prime acquisition candidate, with companies such as Google surely keen to snap up the design team and data upon which Citymapper has grown. But few will have predicted that the hitherto software-only company would be toying with launching a physical bus and associated service. But that, it seems, is what it is doing.

Kicking off in London this week, Citymapper is launching an experimental “popup” circular bus route (for free) with its own green, branded buses. 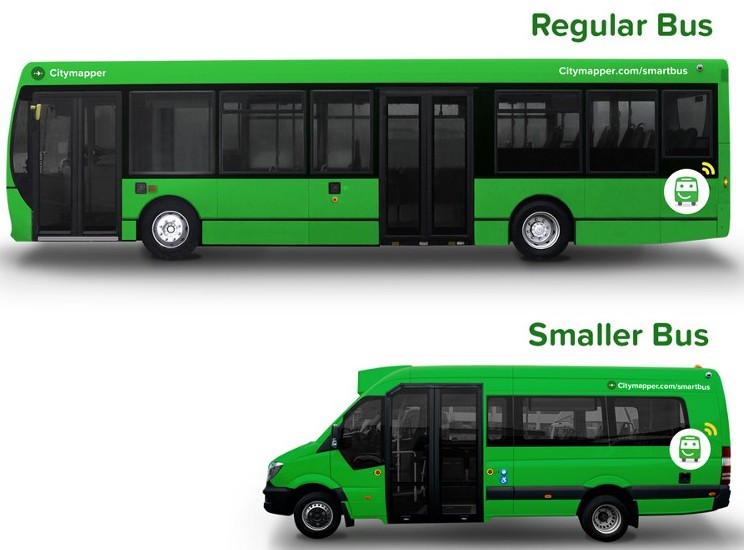 Similar to traditional buses, the Citymapper vehicles follow pre-set routes, with passengers able to jump on and off at bus stops. And for now, the vehicles have been given some technological overhauls. For example, there will be a large screen that shows riders where they are in real time, and what’s coming up on the route — similar to how its smartphone app works. And they also have USB charging ports. 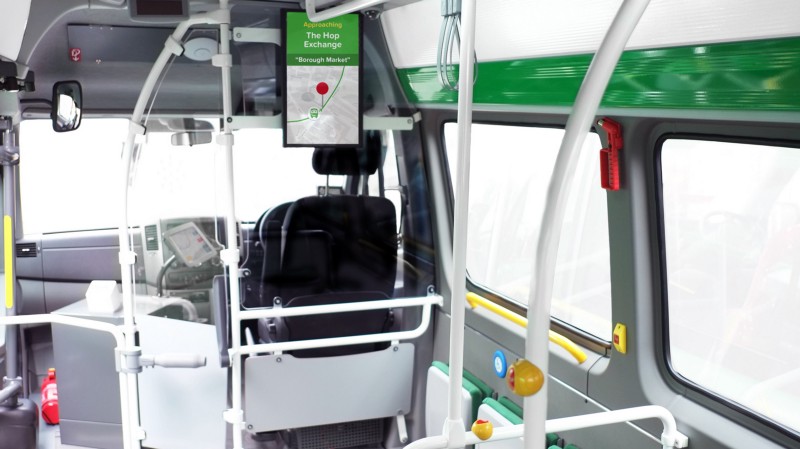 Above: Screen on the bus.

If you’re already familiar with transport apps such as Citymapper and Google Maps, you’ll be aware of certain features that tell you which part of a vehicle is the busiest at a certain time of day — for example, it may recommend that you enter the last coach on a train given that it should be the least busy. But such features aren’t based on real-time information; they’re estimates based on historical data. With its own bus, Citymapper has access to the very fabric of the vehicle, and it has installed its own tracking software that integrates directly with the app. It also boasts real-time passenger counting so it (and you) can know how busy a bus is.

Looking to the future, it’s easy to see how useful this could be if rolled out at scale. Imagine if every bus, boat, and train in London was kitted out with sensors and counters, with the data made available to third-party service providers — this could help cities manage transport infrastructure far more effectively.

Other than that, however, the first version of these buses are fairly standard, with a driver (yup, no autonomous aspirations yet), bells, and seats. But it’s worth noting here that this is the very beginnings of what Citymapper is calling a push to create “better mobility and cities,” according to a blog post on the initiative. “We’re reinventing the entire software stack for running and operating a bus.”

The rise of the smart city

We’re already seeing interesting collaborations between ride-sharing services and city authorities to help improve congestion and planning efforts. Uber has partnered with cities such as Boston to offer trip-level data such as pickup/drop-off locations, distance traveled, and duration, which helps establish traffic patterns and may inform decisions around improving roads or creating parking zones. GPS data is also being collected from a number of other e-taxi platforms to improve road conditions in developing countries, while in China Didi Chuxing’s data is being meshed with smart traffic light systems to ease road congestion.

Citymapper’s ambitions seem to fit nicely with these other efforts around the world, though with a focus firmly on improving public transport, it is bringing its own unique flavor to the mix.

“We built software for everything, including real-time operational control to driver management to scheduling systems,” the company said. “We’re reinventing how to think about all of these in the real-time world. We’ve taken systems that haven’t traditionally talked to each other and integrated them.”

The company hasn’t elaborated on what’s coming next with Project Grasshopper, but ultimately this is all about catering to the emerging smart city revolution. Buses typically follow set routes, but these routes may not serve people best if the majority of passengers typically have to walk 15 minutes once they disembark. And this is the challenge Citymapper is looking to solve with its new buses: How can it improve routes, or identify new ones that are sorely needed?

“In the era of smartphones we can have responsive buses that react to real-time needs,” it said. “Buses also get a bad rep, and are seen as a sub par experience. Even when they’re the best transport option, some people don’t take them. Perhaps we can help change that by improving the bus experience.”

This is one program we’ll be keeping tabs on for sure.