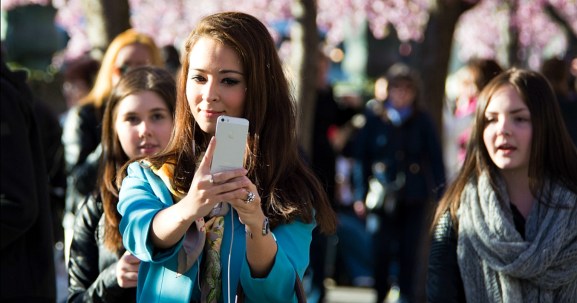 Britain’s luxury fashion house Burberry announced Thursday that it will unveil its new spring-summer collection on Snapchat this weekend.

The tie-up with the hit mobile messaging app, which is especially popular among young people, comes just days after the fashion giant said it has become the first global brand to launch a dedicated channel on Apple Music.

Unsurprisingly, many are interpreting both moves as evidence of Burberry’s push to be at the forefront of mobile and digital innovation in its space — it’s keenly aware of the power and reach of social media in 2015.

The timing of the announcement is no accident — it has been carefully arranged to coincide with next week’s London Fashion Week. Burberry’s collection will appear on its Snapchat channel at 7pm Sunday, and, in typical Snapchat style, disappear after 24 hours, according to Bloomberg.

Snapchat will also curate a live show of Burberry with crowdsourced footage, according to The Wall Street Journal.

The mobile app has not been resting on its laurels, either. In May, it said it has hit 100 million active daily users, 65 percent of whom upload photos. Its fundraising efforts, too, are slowly but surely edging closer to $1 billion.

Whiskey ads are now also showing up in Snapchat — if you’re old enough — and on Tuesday it announced a new monetization strategy: allowing users to replay snaps for 99 cents.