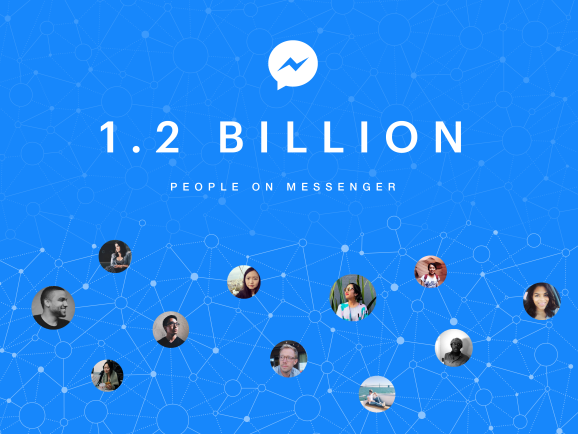 Less than a week before Facebook holds its 2017 F8 developer conference, the company has revealed that more than 1.2 billion people use Messenger every month. This is a 20 percent increase from July 2016, when the app first passed the 1 billion mark. It’s also 64 percent of Facebook’s 1.68 billion monthly users, a 4 percent increase from nearly nine months ago. But unlike before, the company has declined to provide additional details about app usage.

The addition of 200 million monthly users could be attributed to the spate of updates that have been released over the past few months. This includes such examples as launching Messenger Day; rolling out polling and quick replies to encourage peer-to-peer payments; enabling you to easily switch between video and phone conversations; introducing a single inbox for brands to manage all messages across Messenger, Instagram, and Facebook; updating the camera feature to support arts and special effects on photos and videos; adding group video chat, group payments, reactions and @mentions; and releasing suggested responses powered by Messenger’s M assistant.

The continued upward momentum Messenger is seeing might even convince Facebook to bring ads into the platform, now that there’s critical mass. The company is already testing this option out with a group of people in Thailand and Australia, where they’re seeing ads on the chat app’s home screen, and there’s a chance this will be expanded in future. David Marcus, the head of Facebook’s messaging products, told Recode this week that Messenger’s business model is all about advertising — not payments or commerce but rather increasing ad load to drive more revenue to the company.

Another way of looking at the 1.2 billion monthly users is that it’s proof Messenger has become a more integral part of people’s lives. In July, Facebook said that voice calls through the app accounted for 10 percent of all Voice over IP (VoIP) calls. Whether this percentage has changed remains unknown — the company wouldn’t say. But between offering better communication between friends and the ability to interact with brands directly or through their bots, Messenger has certainly become more than the chat app of yesteryear.

At next week’s F8 conference, all eyes will be watching to see how the social media company is going to further advance its Messenger platform to continue growing its audience and convincing us to spend more of our lives within the chat app.