Samsung’s chance at redemption is here with the release of the Galaxy S8 smartphone. The company is looking for a way to rebound after a disastrous incident over its next-generation productivity device, the Note7, which was recalled after multiple reports of battery explosions.

While the specifications of the latest Galaxy phone are noteworthy updates from its predecessor, much of the hype surrounds the Bixby artificial intelligent assistant — does it measure up? It’s efficient, but sadly it’s underwhelming at launch, which I’ll get to more later. But should this dissuade you from purchasing the Galaxy S8 or S8+? There’s quite a bit of potential in this phone, but just like how I said the S7 is largely iterative from the S6, so too is the S8 from the S7.

Is it really better than the S7? 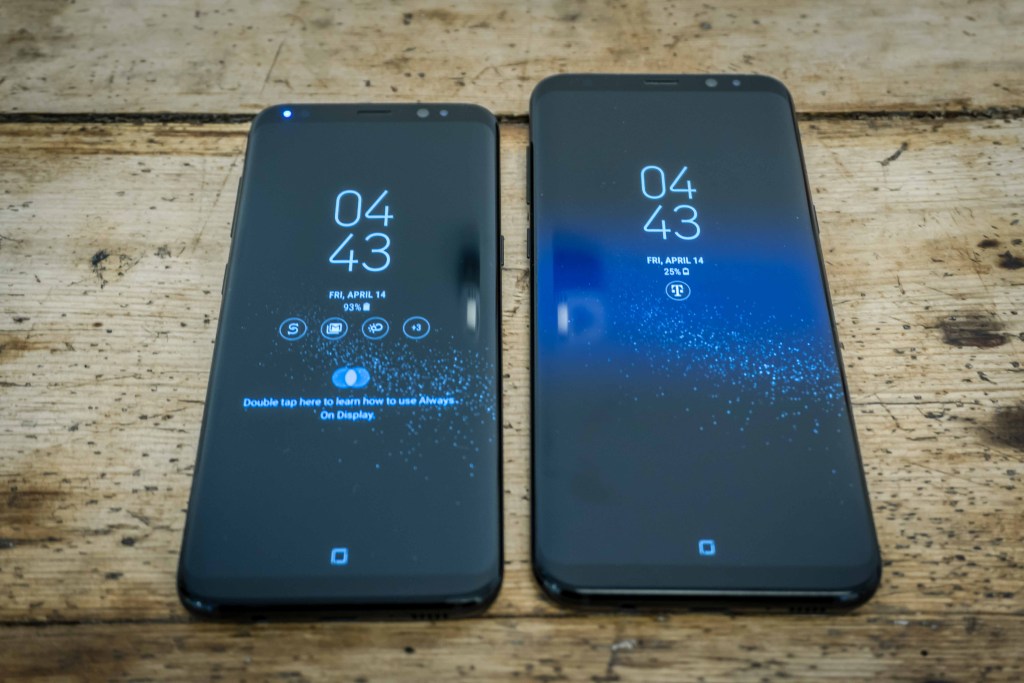 Measuring at 5.8-inches and 6.2-inches, the S8 and S8+ are not your average size phones, which could give people pause. But while they are taller, they are not wider. Because of its near bezel-less edge, when gripping the device, you don’t feel any pointed corners or sides jabbing you — Samsung has made sure its contours fits your hand in a comfortable manner. And yes, the Galaxy S8+, the larger of the two models, did fit in my pants pocket just fine without fear of bending.

Besides the size, one of the first things you’ll notice is the display — Samsung wasn’t wrong when they claimed 83 percent of the S8 was covered by the screen. Doing normal things like checking email, tweeting, and posting on Facebook on this device is very different than before, regardless of whether you were on iOS or Android previously. The infinity display provides an experience that feels liberating similar to wading in an infinity pool. With no appearance of a border, it feels like the screen goes on forever.

Above: The Samsung Galaxy S8+.

The screen resolution on both the S8 and S8+ are higher than its predecessor and with fewer pixels per inch. The quality of a Netflix video or even gameplay on the latest Galaxy smartphone is really sharp.

Edge display is also supported, but you can disable it if you don’t like it.

Performance-wise, Samsung added a slightly faster Octa-core processor, and I hardly noticed any significant lag in the time app loading or anything else. While many will likely use the S8 as a personal device, there’s an opportunity for it to also be a work computer as well when combined with Samsung’s DeX docking station. So whether you’re using the phone to check email, update a document, watch a movie, or chat with friends and family, you should have pretty good performance.

The battery on the S8 is the same as the S7 at 3,000mAh, but the S8+ is smaller than the S7 edge at 3,500mAh. Having used the S8+ as my daily device, checking email, taking photos, making phone calls, surfing the internet, and watching movies, the battery lasted approximately the entire day without needing to charge. Overall I was impressed with the power Samsung has added to this — and no, it didn’t explode on me. And yes, fast charging is supported. 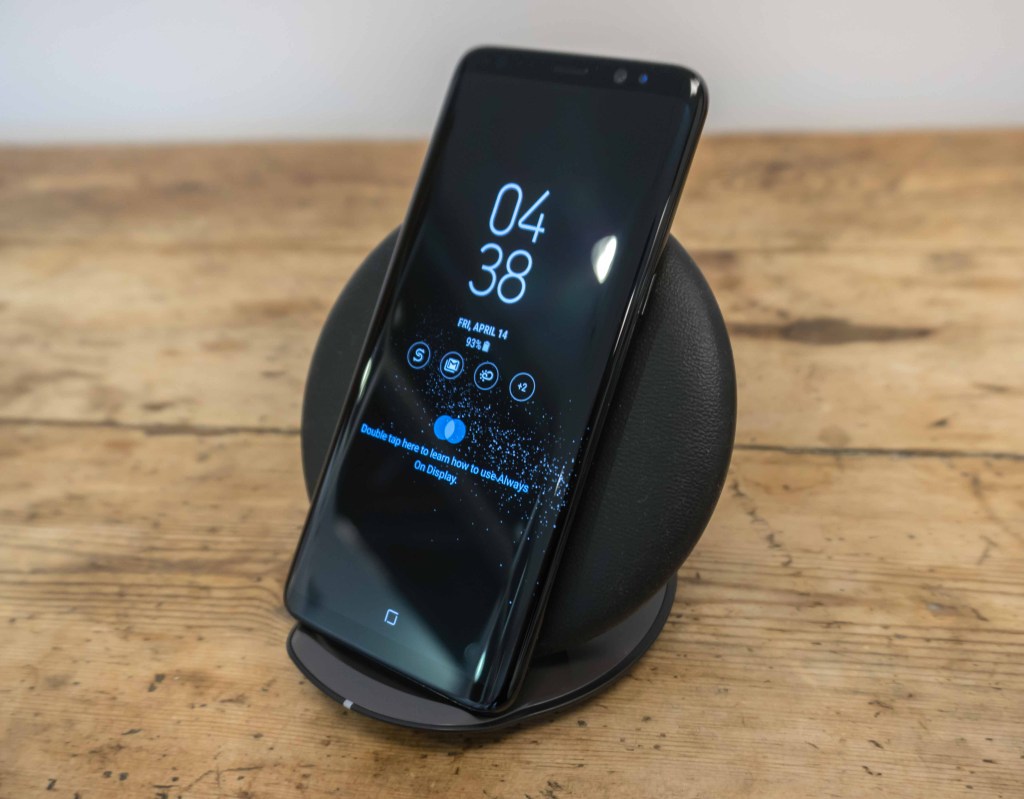 Above: The Samsung Galaxy S8 being charged on the latest charging station.

The sound quality is great on this phone, both when listening to music or phone calls. When set at full volume, I did not notice any issues with the speakers.

One of the disappointing things about the build of the S8 is the camera. It has a dual-pixel camera, takes great photos, does really well in low light, and has all the bells and whistles of the S7. It’s that Samsung didn’t push the boundaries more on it. The only differences between the two generations is that the front-facing camera now has an 8 megapixel lens instead of 5 and there’s better software to take selfies.

Above: Comparing the home button on the Samsung Galaxy S7 edge and S8+.

Unlike the previous Galaxy smartphones, the S8 and S8+ do not have a physical home button. Instead, Samsung has added a virtual one with pressure sensitivity. Its removal was done to provide a larger display. When using certain apps in landscape mode, Samsung will hide the home and back button, as well as the other one to view open apps. To summon it, swipe from the bottom of the phone inward.

Samsung has retained the game launcher so you can prevent notifications from appearing during gameplay, mute a game, take a screenshot, record gameplay, and even lock the touchscreen. When in game mode, swipe inward to show the virtual home button and you’ll see an option for additional settings.

The review unit I received uses T-Mobile as a carrier, so I encountered some bloatware, such as device unlock, visual voicemail, T-Mobile TV, T-Mobile Name ID, and the company’s namesake app. Lookout also came pre-installed along with the host of Samsung apps.

Above: The Samsung Galaxy S8+

Like the S7 smartphones, the S8 is rated IP68 so it’s dust and water resistant.

About that fingerprint sensor

Something people may find unnerving is the placement of the fingerprint sensor — because the physical home button is no longer on the front of the S8, Samsung has relegated it to the back. But unlike most Android devices these days, the sensor is not in the middle of the phone but next to the rear-facing camera lens.

Weeks ago, Samsung told VentureBeat that the placement was a design choice, but when prodded for more insight, a company spokesperson declined to comment, saying “We do not have further information to share about the fingerprint sensor placement at this time.” 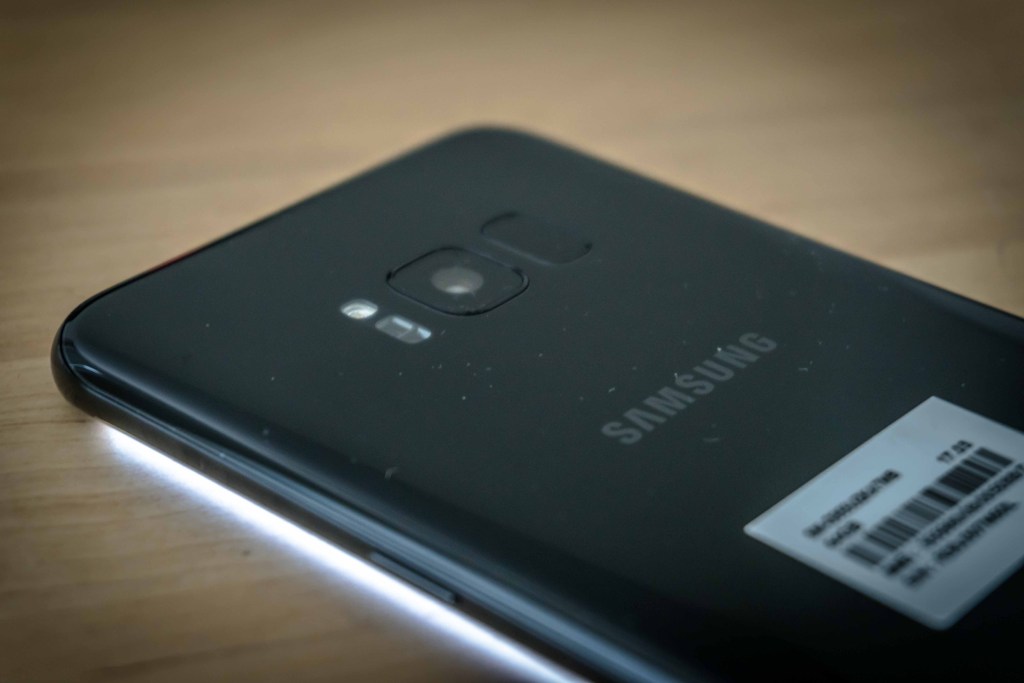 Above: The camera and fingerprint sensor on the back of the Samsung Galaxy S8+.

At first it was pretty weird using the fingerprint sensor as I was trying to do so without turning over the phone — having to constantly look where the sensor is and place my finger there can be irritating. As my finger slid across the back of the device, I tried to feel where the sensor might be but oftentimes found my finger covering the camera lens instead. Only after many attempts did I feel comfortable in knowing exactly where the sensor is.

Because of its proximity to the rear-facing camera, however, be prepared to occasionally wipe fingerprint smudges off the lens. In fact, there were times when I turned on the camera only to be prompted to clean the lens. 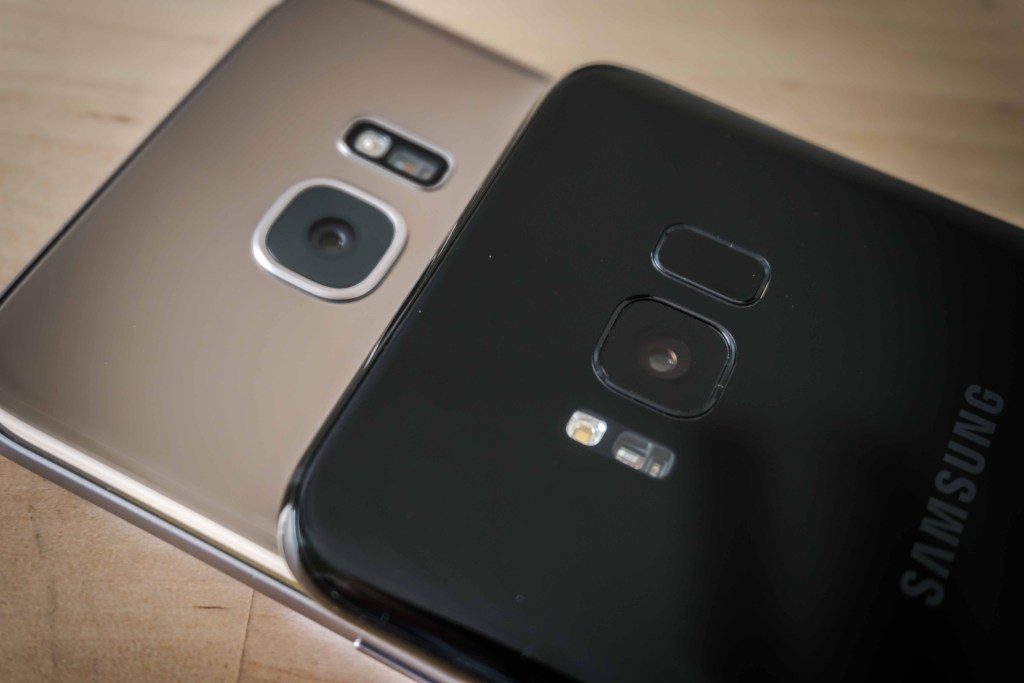 Above: Comparing the back of the Samsung Galaxy S7 edge (bottom) with the S8+ (top)

The phone also includes other security measures you can take advantage of including using a PIN or pattern. Samsung has brought over the iris scanner from the Note7, but there’s still some difficulty in scanning if you wear eyeglasses, and oftentimes I opt instead for the fingerprint sensor. As before, only one pair of irises can be stored on the device.

The Galaxy S8 and S8+ both feature face recognition, which is indeed faster in accessing the site, but isn’t exactly a better security mechanism; it’s been reported that anyone can beat it by having a photo of you. I tried to recreate this and wasn’t successful, so at least it’s difficult to do. However, it’s probably best to not think of this as the most secure way to protect your phone. Only one face scan can be stored, and you’re unable to use this feature simultaneously with iris scanning.

Bixby was probably one of the most anticipated features worth checking out on the Samsung Galaxy S8, but then the company dropped a bombshell a few days ago: The artificial intelligent assistant won’t have voice search enabled right away. If you’ve pre-ordered a phone, you will get access to vision, home, and reminder. but voice search won’t be available until “later this spring.” 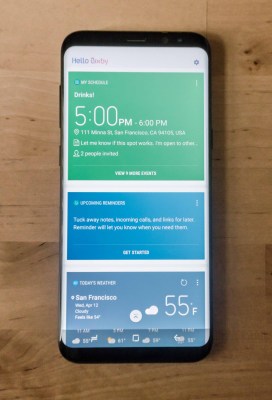 Above: The Bixby Home dashboard on the Samsung Galaxy S8+.

It’s disappointing that Samsung didn’t have Bixby ready for prime time, especially after touting its potential during a controlled demo — while a representative explained what the AI assistant could do, reporters were not allowed to directly try it out.

Denying full access to Bixby has resulted in an underwhelming experience. Yes, the Bixby Home feature in the -1 screen is well designed and replaces the Flipboard integration, but the individual modules are not fully integrated into the AI so the services can talk to one another. In a perfect world, tapping on the dedicated side button would activate Bixby, but now it doesn’t do anything. You have to press twice to access Bixby Home.

When setting Bixby up, Samsung will ask if you want to give permission to your phone, messages, contacts, calendar, location, and phone storage. You have to use a Samsung account to connect with the AI, so this might be a turnoff for some people who hate having another account to manage. Of course this is a win for Samsung because it gets more users. 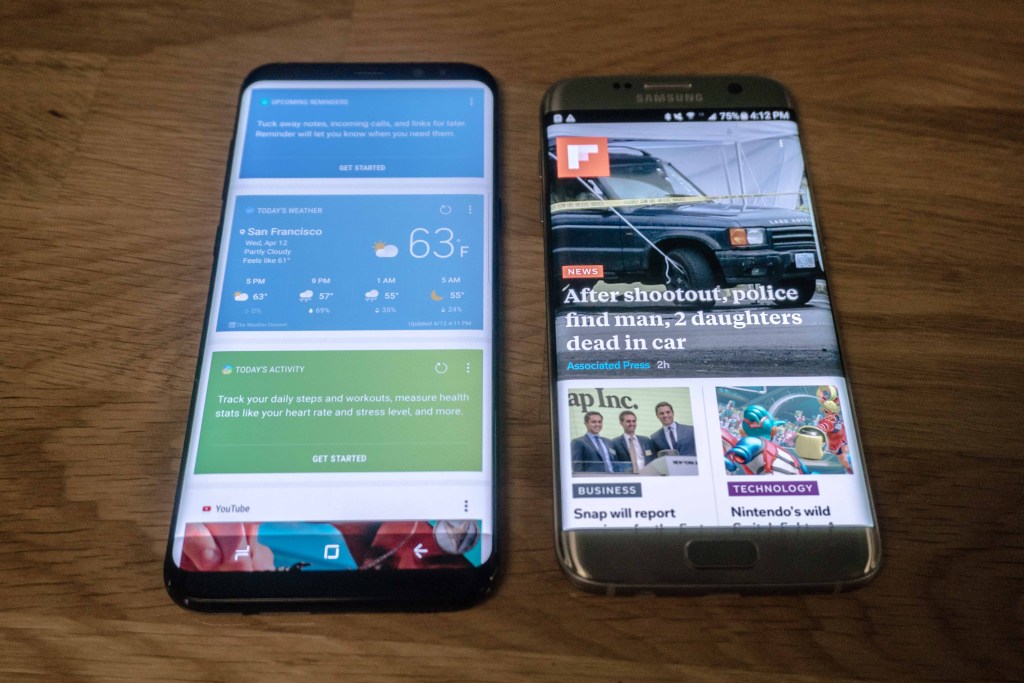 Bixby Vision is perhaps the only part of the AI currently worth checking out. Open up the camera app and at the bottom of the screen is an icon that looks like an eye graphic. Tap on it to enable Bixby Vision. Find an object, landmark, or person and hold still for a few seconds. The AI will scan and then present you with at least several options: Do you want to view related images, go shopping for it, or find more info (if it’s a place or landmark you’re looking at)?

You can even use Bixby Vision on photos in your camera roll. Just go into your stored photos, select one, and tap on the option for Bixby Vision (it should be next to the Auto Adjust menu button). 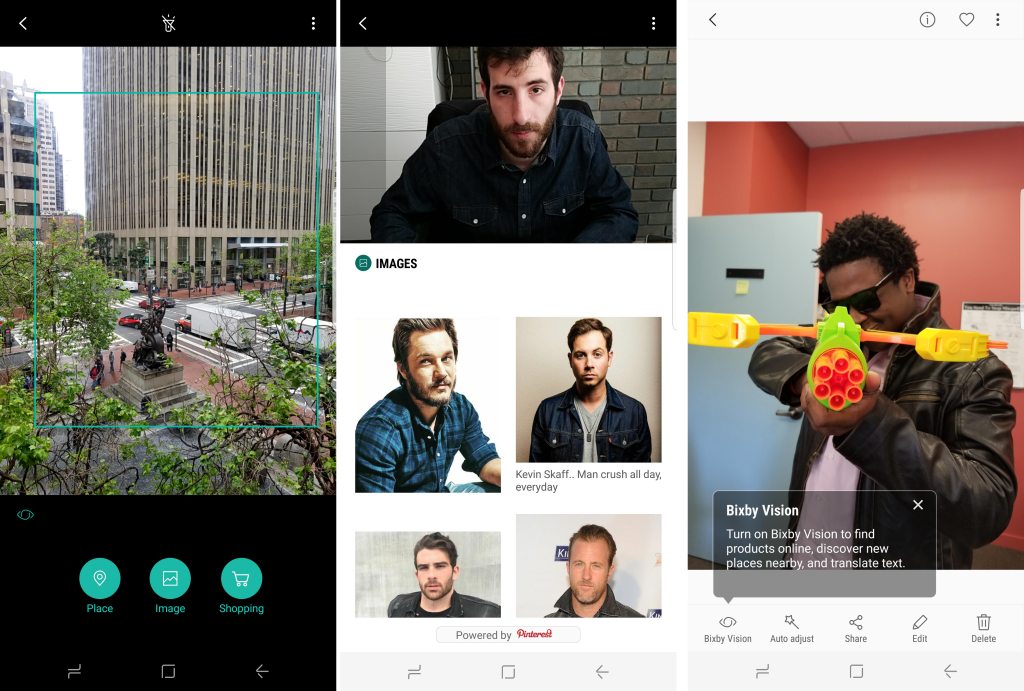 Above: Using Bixby vision on the Samsung Galaxy S8+ camera.

Bixby isn’t the only AI assistant on the S8 phone. Since it’s running Android 7.0 Nougat, Google Assistant is also included.

If you’re hoping for Bixby to be mind-blowing, you’ll be disappointed since it seems the most useful feature is coming later. If you have a Samsung Galaxy S7 or S7 edge, then stick with it unless you really want the infinity display and slightly more power. Otherwise, hold out for the S9 next year. But if you’re looking to jump to an Android phone, then the S8 is worth taking a look at because it gives you a great display and a great camera. 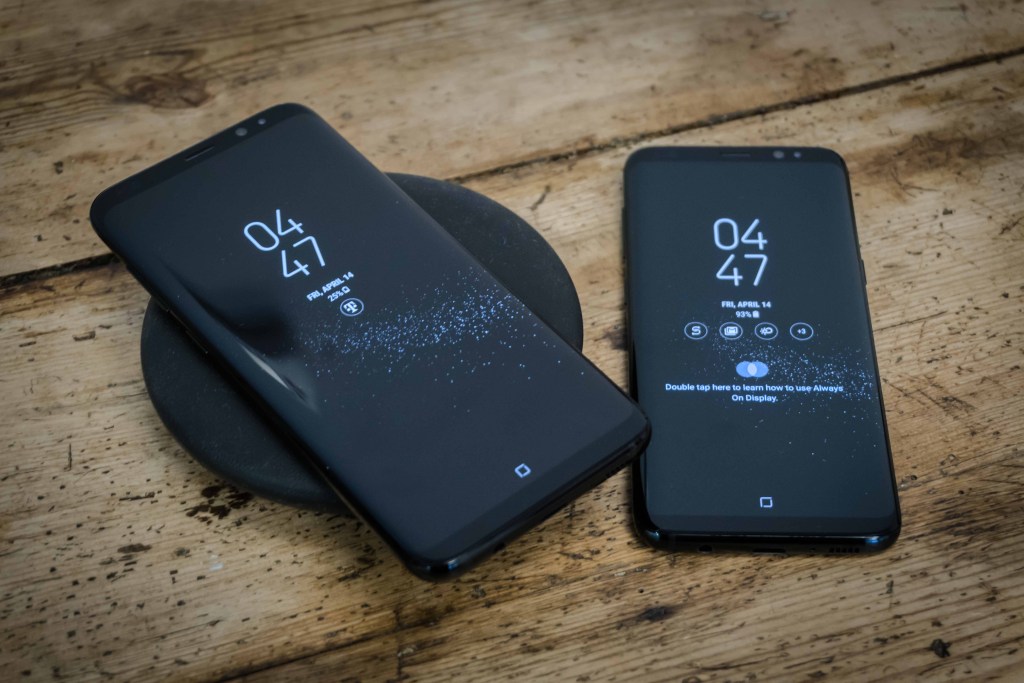 Above: The Samsung Galaxy S8 and S8+ along with the redesigned fast-charging dock.

Should you be inclined to purchase the S8, the next step is deciding which version you want, the 5.8-inch or the 6.2-inch one. If you love a big screen, then get the 6.2-inch, but there are minor differences between the two so it’d be OK to get the 5.8-inch one, especially since it’s cheaper. It’s still one of the largest smartphones out on the market, bigger than the iPhone 7 plus.

As a personal aside, when I first laid eyes on the Galaxy S8, I thought that it would be the next phone I get based on what Samsung was putting into it, but after a week using it, I’m a tad more apprehensive about purchasing it.