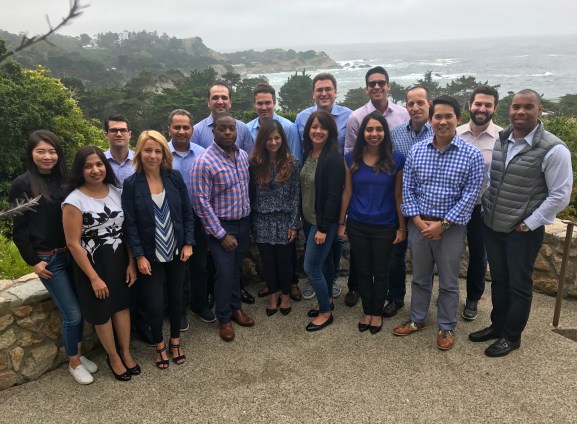 The Microsoft Ventures team poses for an undated photo.

There’s a new Microsoft in town, and the company has spent the past and a half year embedding itself into the worldwide venture capital ecosystem. It’s a move that’s supposed to keep the company in touch with the latest startup developments, something that CEO Satya Nadella believes is critical to its success.

Making Microsoft an attractive resource to new companies is no small feat: While Nadella has spearheaded a massive effort to transform the company, it had to overcome a tough image of being stodgy, difficult to work with, and stuck in the past. As part of that work, Microsoft made a massive commitment to provide startups with funding and support through a venture capital arm.

Called Microsoft Ventures, the team is charged with going out and helping to fund startups that would be useful for Microsoft to be in touch with and that would benefit from the company’s assistance. The team is led by Nagraj Kashyap, a veteran investor who previously led Qualcomm Ventures for 15 years.

Over the past year and a half, the Ventures group has made more than 40 investments, and led or co-led eight of those deals. It has offices in Silicon Valley, Seattle, Israel, and London. The venture investing team has come almost entirely from outside Microsoft, from a diverse set of backgrounds including traditional venture firms, corporate venture arms, and startups.

“When we think about startups, we kind of see companies that are in the midst of creating their own unique journey, across a variety of different phases or chapters, in a broad ecosystem,” she said in an interview. “[They’re] usually journeys that are made up of a lot of different learnings, and successes, and usually some failures along the way. Microsoft is really in a unique position to support the startups in multiple phases across the ecosystem through multiple points in different chapters of the journey.”

When it comes to powering the next generation of companies, Microsoft faces a great deal of competition from major rivals like Amazon and Google. Early outreach to startups provides a number of benefits, including the ability to push its Azure cloud platform, get early access to possible acquisition targets, and keep tabs on what’s going on at the cutting edge of the tech ecosystem.

Questions remain about Microsoft’s longevity in the startup realm, however. While the company has been well-received for the moment, its current corporate venture initiative is new and its past involvement in the space has been inconsistent.

The company’s charm-and-funding offensive has been paying off in the near term. Kashyap said that the company’s most recent deals have come as a result of referrals from their previous crop of companies.

“Our last three deals were founder referrals, which means our first cohort of entrepreneurs that we funded in the last 12 to 16 months are now saying, ‘We’ve had such a good experience, not only with Microsoft but Microsoft Ventures, that we want to spread the message.'”

Founders and venture capitalists who have worked with the Ventures team are optimistic about Microsoft’s ability to provide value for their partners. In their view, Microsoft is generally on the right path when it comes to its work with startups.

“Just like Salesforce Ventures, Microsoft Ventures has become a highly valued partner for venture firms, especially in application and infrastructure software investments,” Doug Pepper, a managing director at Shasta Ventures, said in an email to VentureBeat.

That said, it’s still early days for the Ventures team. While Microsoft has put a lot of work into building out its venture group and the internal infrastructure to support its work, the team has only been around for a year.

What Microsoft has to offer

Microsoft Ventures has a war chest at its disposal, and yet the group’s true power resides not with its checkbook but all of the other benefits that a deal with the tech giant can provide.

The Ventures team will help its startups access resources inside the company, including technical help with Microsoft products and showcase opportunities with the company’s customers. For startups that are ready for it, Microsoft will also offer co-selling support, so that its salespeople will push products from startups alongside the tech titan’s own offerings.

That piece is incredibly valuable to entrepreneurs, since Microsoft’s salesforce reaches global enterprise customers in a way that is traditionally unavailable to startups.

The company operates a number of meet-and-greets to connect startups with its enterprise customers so the two groups can share information. It’s a win-win for the companies involved.

“This allows CIOs, for example, to go back to their companies, and have future vision into where the tech is headed, our customers are very appreciative of that, but it also creates an interaction with the startup that the startups value very greatly,” Yarkoni said.

Investments through Microsoft Ventures and Microsoft’s accelerator program are also powerful levers to help Microsoft push its cloud services with the startups it invests in.

The overwhelming majority of companies that Microsoft invests in are using competing technology at the time of the deal, according to Kashyap, and Microsoft doesn’t force them to move away from that. In many cases, however, he said that the companies decide to start using Microsoft tech on their own.

“And the realization for the startups comes once we open up our contacts for them, make the right connections with Microsoft, they meet the folks, they’re happy with the partnership opportunities, and they say, ‘Look, I want to take more advantage of this,'” he said.

What makes a Microsoft Ventures startup

So, what is the Ventures team looking for? First and foremost, Kashyap said that they — like every other VC firm — are looking for companies that will provide a return on the investment made. In part, that’s because he believes that the companies providing the best financial returns will also provide Microsoft with the best information about where the tech industry is going.

“We need to sort of connect the dots in our minds, not through the lens of Microsoft, ‘This will be an interesting area, an interesting company for Microsoft in a given point in time,'” Kashyap said. “We are not going off the reservation and doing things where there’s no connection back to Microsoft.”

The Ventures team doesn’t have to draw a straight line between a startup and a Microsoft product like Office or Azure, but it is looking for firms that Microsoft would be interested in following long-term.

One clear area of interest is artificial intelligence. The Ventures team has a fund dedicated to AI companies, in line with Microsoft’s reorganization to focus on that technology. The firm has invested in Element AI, a Montreal-based company that’s aiming to help enterprises adopt intelligent technologies. Bonsai, a platform for executing AI systems; Outreach, a company that creates software to help sales teams; and Agolo, a company that automatically summarizes information, are other examples of Microsoft’s investments in AI businesses.

Choosing to work with a strategic investor like Microsoft can be daunting. Jake Saper, a principal at Emergence Capital, said that it’s important for startups considering taking money from a strategic investor to talk with other entrepreneurs who worked with the company in the past. In his view, a shocking number of companies choose not to do that.

While traditional VCs offer a number of benefits, including access to funding and resources around hiring, Saper said that bringing a strategic investor into the mix can benefit companies, assuming it’s the right fit.

“When done well, it’s incredible,” he said in an interview. “You get access to their customer base, you get technical help or technical validation. Corporates can help in a way that financial investors cannot.”

Microsoft is also easier to work with than some other companies, according to Dan Scholnick, a general partner at Trinity Ventures.

“They make decisions quickly, there’s not lots of bureaucracy going back to corporate, they do follow-on financing the same way that a typical venture firm would, so it doesn’t feel like you’re dealing with a corporate VC, which from our perspective is great,” he said.

There are still plenty of questions when it comes to the future of Microsoft Ventures. While the venture capitalists who spoke to VentureBeat for this article were all enthusiastic about the role that Microsoft could play in the market, they each cautioned that the company still needed to prove it was playing a long game in the venture market.

Microsoft will also need to deliver on its promised benefits to the startups that it funds. While the company will offer sales support, access to internal resources and connections to customers, all of that depends on Microsoft feeling like such things would be the right fit.

Manuel Medina, the cofounder and CEO of Outreach, said that being a Ventures company didn’t provide preferential treatment.

“All you do is you get a couple people in the know who are internal to Microsoft, chasing stuff for you,” he said. “For instance, we wanted to get published on the Outlook store so we could be a plug-in, and we didn’t get fast-tracked or anything. We got put through the same queue just like everybody else.”

That said, Medina was still interested to see if Microsoft’s “legendary” sales team could help his company in the future.

Kashyap also pointed out that Microsoft needs to set expectations with its portfolio companies about what they’ll get, and that the company doesn’t guarantee a commercial relationship after funding. That’s something he thinks the team has done well with its most recent batch of investments.

This isn’t the first time that the tech giant has jumped into the funding ecosystem under the Microsoft Ventures moniker. Four years ago at a small conference in San Francisco, VoodooPC cofounder and then-Microsoft executive Rahul Sood unveiled Microsoft Ventures, which was supposed to be a one-stop organization for founders to access Microsoft’s accelerators, funding, and free software.

That iteration of Microsoft Ventures came about as an evolution of the Bing Fund, Microsoft’s first foray into investing in startups in a structured way. The team behind this current version of Ventures is completely new, and Microsoft feels like it has improved on its first outing in the investment space in the intervening years.

Sood has since moved on from Microsoft to found Unikrn, a startup that enables people to bet on esports matches. Sood declined to comment on the Ventures team’s current direction.

Yarkoni said that she sees a great deal of opportunity going forward for Microsoft to build and develop more programs and help the startup market with greater scale.