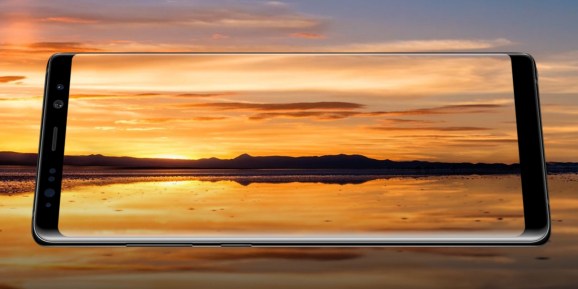 Samsung really has outdone itself. Galaxy S8, Galaxy S8+, or Galaxy Note8, I don’t care. When it comes to the screen, Samsung wins.

Samsung has, of course, made beautiful screens for years. It is widely considered the best in the business, to the point where other companies don’t even bother and simply use Samsung screens, in everything from smartphones to TVs. This is largely a result of experience and expertise. Keep in mind that Samsung Electronics is part of the larger Samsung — a colossal conglomerate of about 80 companies that has been around for three-quarters of a century.

But this year, Samsung has really stepped up the game with the Infinity Display. All three 2017 Galaxy phones have a screen-to-body ratio of over 83 percent. A few niche phones have landed in this ballpark as well, but Galaxy is a mass-market product line.

I’ve played with a Galaxy S8 and Galaxy S8+, but only briefly. Because for the first time I’m not excited about Google’s upcoming phones, this week I decided to switch to the Note8 as my daily driver. I’ll still try to give the second-generation Pixels a go, but I’m making a point to see what else is out there.

Within the first few minutes of using the Note8 — while still setting it up and getting ready to transfer over my contacts and text messages — I realized this was different. The bar had been set, and I would never want to go back to phones with smaller screen-to-body ratios. I’m not sure I’ll want to switch back to my Pixel XL, even though it’s already running Android Oreo.

The screen is massive. The phone itself is also pretty big, and it’s certainly not the ideal size (the Galaxy S8+ may end up being my sweet spot, since I don’t really care for styluses), but it doesn’t feel as massive as the screen. That’s an odd conclusion to come to: The screen is huge, but the phone isn’t unwieldy.

I’m still not sold on the way the screen tapers off on the edges. But it’s a small price to pay for such a gorgeous display.

My colleague Evan Blass, who follows phones more closely than anyone I know, had a similar experience earlier this year:

If you’re not a fan of Samsung devices, don’t worry. It’s not the only one pushing the screen-to-body ratio envelope.

It’s just the one that has made it the flagship standard this year. Everything from major competitors like LG are playing ball, as are new entrants like Andy Rubin’s Essential.

Oh, and Apple will join next week.