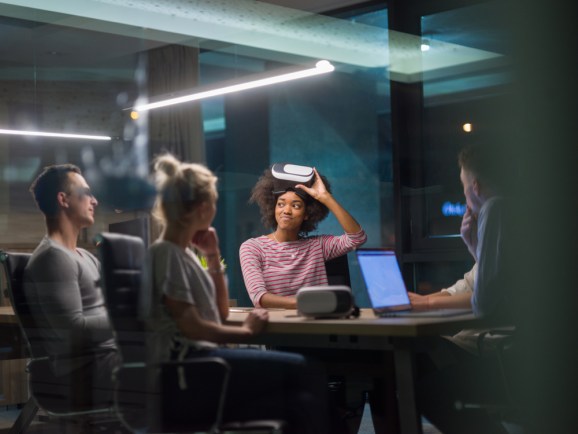 On the VR startup train? Our latest VB Live event features VR entrepreneurs with hands-on experience, who know a thing or two about jumping startup hurdles and launching their big ideas, ready to share the lessons they’ve learned and break down what it takes to succeed.

New technologies often make bold promises about unlocking potential, offering whole new worlds of possibility, world-wide success that nets you a garage full of Teslas, a fireplace that runs on hundred dollar bills, and the love, admiration, and envy of all of your peers and enemies.

When the technology is as heady as virtual reality, it’s even harder to separate the hype from what’s actually commercially viable, but there are still an awful lot of companies taking a big swing at it. There are 33,000 people employed in the U.S. VR industry alone, and we’ve come a long long way from 1992, when one of the first VR helmets actually made Peter Molyneux physically sick within two minutes of donning it.

The technology has reached the point where companies can actually deliver on the promise. And success stories are springing from the woodwork.

For instance, games like Survios’ Raw Data, the first VR-exclusive game to reach #1 on Steam’s Global Top Sellers list, and the first VR game to make $1M in a month, show that not only is winning possible, it can look beautiful and play beautifully too.

And companies like Dream Reality Interactive, founded in late 2016 as a VR development studio, are raising significant rounds of funding. dRi recently announced backing from from creative agency Mother and investor Phil Harrison for projects like “Hold the World,” a production which honest-to-god features director David Attenborough as a VR hologram.

Funding can accelerate a company’s ambition and validate their audacious new vision of the potential of virtual reality. And it’s true that VR offers new levels of immersion, as well as a lens through which the future shape of marketing via virtual brand storytelling can be glimpsed.

But despite the number of VR startups popping into the space, long-term commercial viability is unproven. Mainstream adoption still hasn’t taken off. Console headsets haven’t penetrated the mass market, although consumers say they’re fascinated by the technology. They’re just not shelling out for it yet. It’s not easy to change behavior and expectations — in fact, it takes years, and the change that VR represents is huge. It becomes a question of how to survive the desert.

Entrepreneurs are called upon to balance the brilliant, innovative new VR startup inspiration that’s on their minds with the reality that we’re still in vast, mostly uncharted territory where all the maps keep changing, and wandering off a cliff and into the 3D television chasm, where hype goes to die, is always a threat.

So how do you make sure your startup hangs on until mainstream adoption starts to take off, and its market applicability and relevance begin to pay off? Join our latest VB Live event, where we’ll be featuring a panel of VR entrepreneurs with hands-on experience, who know a thing or two about jumping startup hurdles and launching their big ideas, and are ready to share.

You’ll hear case studies from VR startups, and then join an interactive 30-minute panel discussion led where our panelists will reveal the lessons they’ve learned and break down what it takes to succeed.

More speakers to be announced soon.