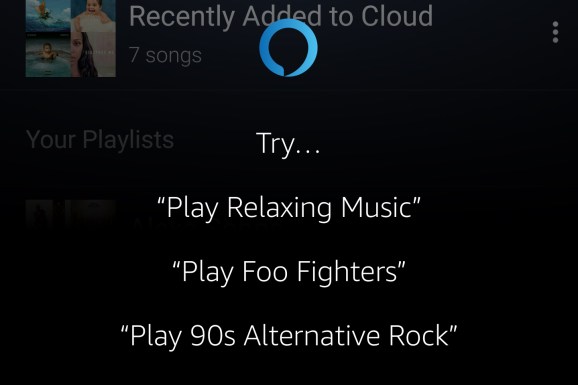 Amazon today extended its voice assistant, Alexa, into the Amazon Music app for listeners in the U.S., U.K., Germany, and Austria.

“Millions of Alexa customers have enjoyed listening to music on Echo devices, and with Amazon Music’s innovative Alexa voice controls, customers can ask for music based on genre, decade, mood, tempo, activity or even the lyrics, if they can’t remember the name of a song,” Amazon said in a statement.

To speak with Alexa in Amazon Music, just tap the new Alexa icon at the bottom the screen when using the app.

Amazon Music users on iOS and Android can tell Alexa things like, “Play the latest Open Mike Eagle” or “Play Coldplay from the 2000s.” Starting a road trip? You can say, “Alexa play music for a road trip” and be on your way. Want to get more specific? You can say things like, “Alexa play classic rock for lifting weights” or “Play hip-hop for cardio.”

Bringing Alexa to the Amazon Music app is the company’s latest effort to make Alexa master of your media universe. Last month, Amazon gave Alexa control of the Fire TV stick and the ability to stream music through multiple Echo devices.

This is also the latest tit-for-tat in the chat wars between tech giants. With the launch of iOS 11 last week, iPhone and iPad users gained the ability to treat Siri as a personal DJ. The Apple HomePod, which is anticipated to be a major competitor for Amazon’s line of Echo smart speaker devices, is scheduled for release before the end of the year.

Alexa came to the Amazon app for shopping in July.