WhatsApp has announced a notable new feature today, one that may prove popular with millions of security-conscious, nosy, and impatient people globally.

Landing on both Android and iOS “in the coming weeks,” the new Live Location feature allows WhatsApp users to share their real-time location with friends and family. It’s worth noting here that WhatsApp already allows you to share your current location, however that feature is static — if you’re moving around, friends are not able to see where you’re going.

The new Live Location feature, on the other hand, lets people track where you are for a period of time stipulated by you.

To initiate Live Location, go to the conversation — individual or group — that you want to share your location with. Then hit the little “attach” (paper clip) button that exists in the message field and go to “Location.” Now, in addition to the existing static location-sharing feature, you’ll see “Share Live Location,” as well. 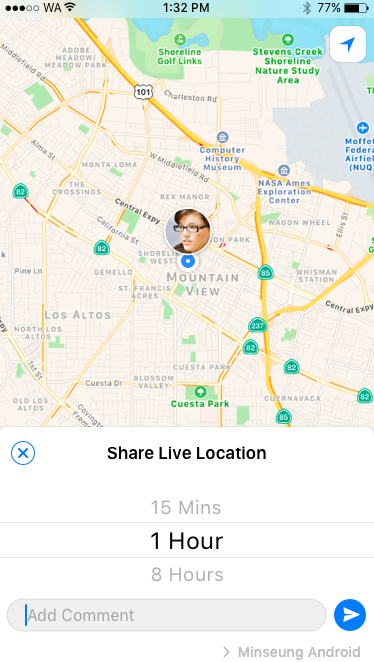 But you can cease sharing your location at any time by hitting the “stop sharing” button. 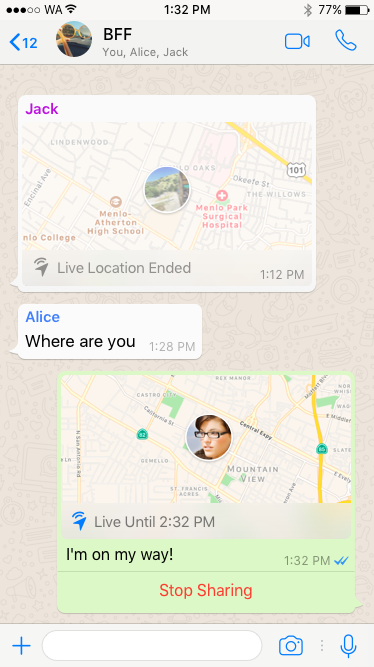 And, interestingly, multiple people from the same group can all share their location on the same map. 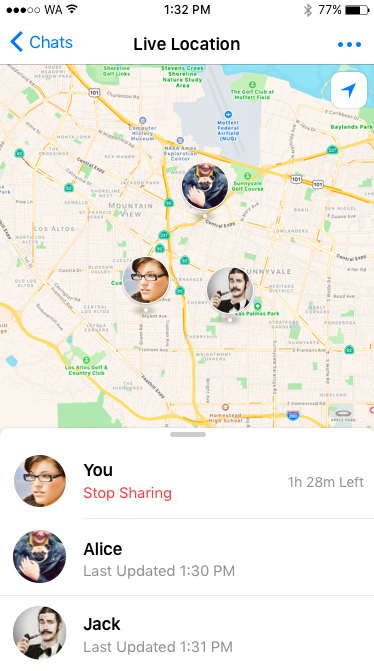 This kind of location-sharing functionality is nothing new, of course. Glympse has offered something similar for years, while France’s Zenly has been gaining traction for its location-sharing app. Google, too, had embraced real-time location sharing with Latitude, a service it killed off back in 2013. However, last year Google launched its new standalone Trusted Contacts app, which offers near-identical functionality, before bringing another similar feature directly into Google Maps back in March.

But with more than one billion active daily users, WhatsApp has emerged as the social glue for countless social interactions — covering friends, families, neighbors, work colleagues, and everyone in between.

There are many use-cases for this feature — if you’re the sort of person who hates hanging around waiting for someone to arrive at a designated meeting spot, you can see (if the other person allows) exactly how long you’ll have to wait. But perhaps the most common use-case will be worried parents or partners wanting to know where their loved ones are late at night.

For the privacy-concerned, WhatsApp is quick to remind users that — like messages and calls — Live Location is “end-to-end encrypted.”