The Facebook Communities Summit (FCS), a Facebook-led event that brings group and page admins together under one roof, is coming to Europe.

Facebook announced the first FCS back in April, with the inaugural event taking place in Chicago a couple of months later. Now the social networking behemoth is hosting a follow-up summit in London on February 8 and 9, 2018.

At the previous FCS in Chicago, Mark Zuckerberg emphasized his appreciation of the role that groups and their admins play in making Facebook one of the world’s biggest drivers of online social interactions. Zuckerberg also unveiled a new mission statement: Give people the power to build community and bring the world closer together. At the event, Facebook launched a bunch of new features to help admins grow and manage their groups, so it must have come as a surprise to learn two months later that Facebook was pulling the plug on its dedicated Facebook Groups app, which admins had enjoyed since 2014.

However, to sweeten the deal and show that Facebook really, really cares about Groups, the company rolled out a bunch more new features last month, including badges for group leaders, welcome posts, and member profile pages. 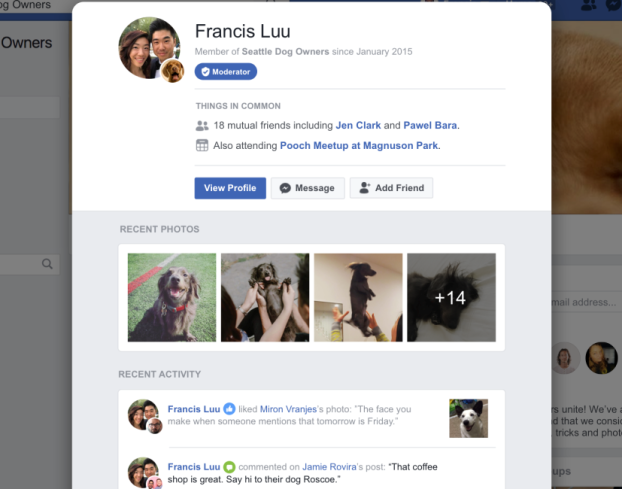 It’s clear that Facebook is keen to foster a community spirit among its two billion-plus global users, particularly at a time when the company is facing increasing scrutiny over its impact on society at large. Through its Communities Summit, the social media giant hopes to create an opportunity for several hundred admins to share best practices while attending workshops and panel discussions.

“Attendees will connect, learn from, and share experiences with other community leaders, as well as hear from Facebook about the products we’re building to help support safe and supportive communities,” said Nicola Mendelsohn, VP for Facebook in Europe, Middle East, and Africa, in a blog post. “We’ll have opportunities for community builders to share their feedback and experiences with us so that we can better support them.”

The London summit is free to attend, and applications are open from now until December 1. Selection criteria includes “active, meaningful groups, pages, or events that are based in Europe,” according to Facebook, though it’s worth noting here that active membership size won’t be a factor for acceptance. Basically, Facebook isn’t looking to highlight the biggest groups, it’s looking to cherry-pick various use-cases to demonstrate the diverse nature of its user base.

Moreover, Facebook said that it will cover travel (including airfare) as well as accommodation expenses for the London event — for its previous summit in Chicago, the company only covered hotel costs.