Fetch Robotics, a Silicon Valley startup that’s bringing robots and a supporting cloud-based software system to industrial environments, has raised $25 million in a series B round of funding led by Sway Ventures, with participation from O’Reilly AlphaTech Ventures, Shasta Ventures, and SoftBank’s SB Group US.

Founded in 2014, San Jose-based Fetch Robotics develops autonomous robots that operate among humans in locations such as warehouses, factories, and distribution centers. CEO Melonee Wise previously headed up Unbounded Robotics, which was shuttered a few years ago due to its inability to raise VC money — apparently because of an agreement it had with Willow Garage, the robotics company it was spun out of.

But while both Unbounded and Willow Garage focused on personal robots, Wise has taken a sideways step to cater to the fast-growing on-demand ecommerce industries that require the speed and efficiency of automation.

The company unveiled its first two products, the Fetch and the Freight, back in 2015. These are designed to operate in a modern warehouse and help companies cut costs and save time. Robots, you see, don’t need regular breaks, and they don’t usually call in sick. 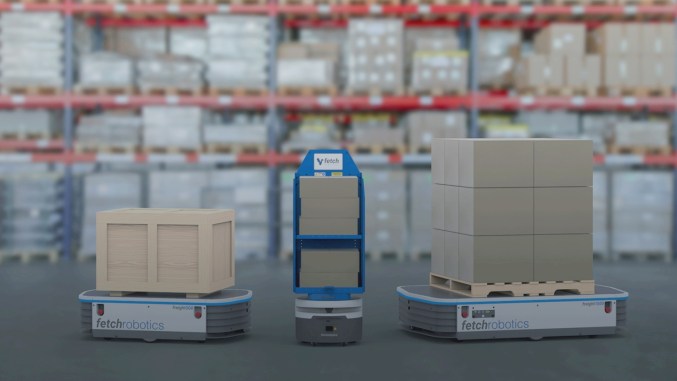 Fetch Robotics had previously raised $23 million, and with its latest cash injection it plans to meet “accelerating worldwide customer demand” for Fetch Robotics software and robots.

“We are seeing first-hand that the growth in ecommerce and an expanding on-demand economy are contributing to unprecedented labor challenges faced by the $5 trillion global logistics industry,” said Wise. “With labor in short supply, our customers are still able to quickly realize significant, measurable productivity increases by deploying our autonomous mobile robots.”

“The warehouse and logistics automation market is estimated at over $40 billion today, and is poised to double over the next five years,” added Brian Nugent, founding general partner at Sway Ventures.

As a result of Sway Venture’s investment, Nugent will join Fetch Robotics’ board of directors.