X.ai’s meeting assistant bot is now available on Slack. Plans to bring the bot that automates meeting scheduling to communication platforms were first shared with VentureBeat last August following the closure of a $10 million funding round.

The bot, which can be named Amy or Andrew, will be able to do the same thing on Slack as it does in email: set up meetings for you using natural language understanding and help eliminate the back-and-forth haggling over when and where to meet. Amy and Andrew can schedule meetings with one or multiple people, record reminders, and deliver meeting summaries.

X.ai started four years ago with an email client, since many meeting requests begin there, but expanded to Slack today because team members did not like switching to email just to schedule appointments with each other. The introduction of Slack group channels in September, which allows two separate Slack teams to share a workspace, was also a motivator, CEO Dennis Mortensen told VentureBeat in a phone interview.

“What we heard from our customers is ‘Hey Dennis, I love Amy and Andrew. I certainly love it when I need to meet up with vendors and interviews and all sorts of things, but for internal meetings we actually do a lot of our team communication in Slack. It can seem a little awkward to take it offline, if you will, so why can’t I just wake her up here?'”

“So we expect that many of the meetings that are set up in Slack could end up being internal, and many set up with Amy in email are likely to be external,” Mortensen said. 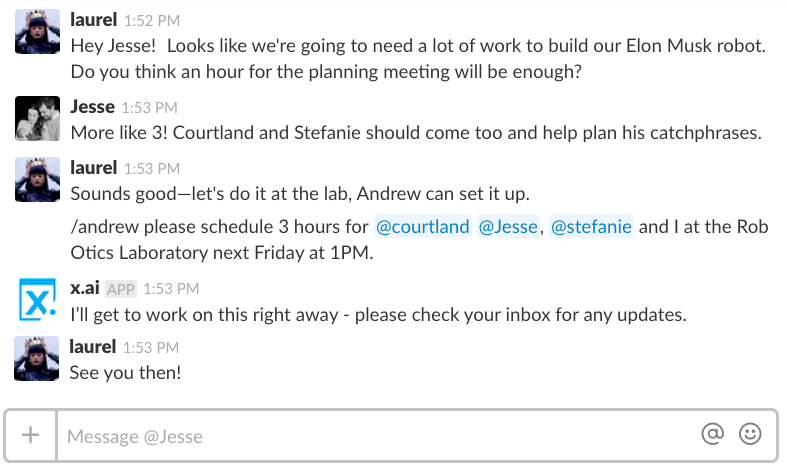 Mortensen insists that X.ai missed little by not being quicker to make a bot for enterprise team communications apps, since the shift to conversational AI is just getting started.

“I don’t think we’re late. If anything, we’re probably too early — as in we still sadly have to see a lot of education going into this, so people understand how to use these agents,” he said.

While X.ai grew a customer base of people scheduling meetings in emails, other meeting schedule services like Meekan spread to several top team communication chat apps, like Slack, HipChat, and Microsoft Teams.

In addition to the Slack expansion, X.ai plans to make its services available in SMS messages later this year to help people schedule meetings with friends and family. Integration with video conferencing services like Zoom and an Alexa skill are also in the works.

The Alexa skill will likely be visual and aimed at Alexa for Business users. X.ai uses text alone to schedule meetings, and Mortensen used to think of visual cues as cheating. But a visual Alexa skill is about trust, he said.

“If you replay my own arguments from four years ago, I used to not be fond of any visual cue — like that’s just cheating. I asked you to do a job, Amy, so just do what I told you to do. But what we found over the last four years is that to build up a trusting relationship between Amy and her boss, sometimes you need to show stuff, what you’re working on, the actions you took and why you took them,” Mortensen  said. “I think if I were to pick from the traditional Echo and the Echo Show, we might even want to arrive in a place where we can show some of the work first, because we’ve seen that the quicker we can build up that trust, the better we’re off.”

Plans to expand to additional languages, like Mandarin Chinese and Danish, will no longer take place in 2018, Mortensen told VentureBeat.