A few months ago, a group of powerhouse female VCs came together to create Female Founders Office Hours, which provides one-on-one mentoring sessions between female investors and female founders. Last week, the group announced the official launch of All Raise, a nonprofit that aims to help women in venture capital and entrepreneurship connect and support one another. All Raise is now blazing full steam ahead and announced today that it has joined forces with more than 120 venture-backed female founders across the country to address an alarming issue in tech: the isolation women in the industry feel.

The All Raise movement is spearheaded by Cowboy Ventures’ Aileen Lee, who was joined by more than 30 other female VCs, including Forerunner Ventures’ Kirsten Green, Spark Capital’s Megan Quinn, and Sequoia Capital’s Jess Lee. Since launching the first Female Founders Office Hours in November, the group says it has received over 1,500 applications for one-on-one mentoring sessions across five events in San Francisco, New York City, Los Angeles, and Boston. So far, the group has held over 200 meetings. 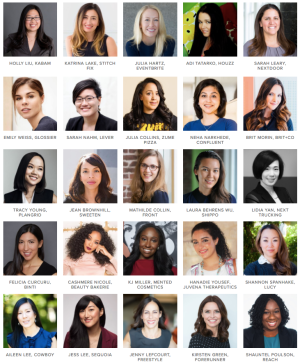 Now, to expand the initiative even further, an influential group of female founders from all stages and sectors is joining All Raise to pay it forward. Mentors include Stitch Fix’s Katrina Lake, Glossier’s Emily Weiss, Houzz’s Adi Tatarko, two of the Coffee Meets Bagel cofounders, Afton Vechery of Modern Fertility, and Felicia Curcuru of Binti, who before becoming a founder worked on the investor side at FundersClub.

“I saw that female founders pitched with less confidence, which can really hurt their chances of success during the fundraising process,” she told VentureBeat, in a phone interview. “And as a founder, I myself felt a bit lonely, not seeing as many women role models.”

Curcuru had thought of a version of Office Hours a while back. Upon meeting Jess Lee at a dinner, the two realized they were working toward the same goal and decided to combine their efforts to reach a larger pool of women in tech.

“My takeaway is that a strong network is essential,” wrote Lee, in a blog post.

For women in tech, these network connections are often forged randomly. But they don’t have to be left to chance. With Female Founder Office Hours, we aim to build an intentional community and a pay-it-forward chain of mentorship between every generation of female founders. Together, we hope to move the needle for women in tech and achieve All Raise’s goal of increasing the percentage of funding to female founders from 15 percent in 25 percent in five years.

Being a nonprofit, All Raise relies on donations to fuel its growth. For now, the organization has a dozen or so partners and sponsors, such as Silicon Valley Bank (SVB), Sequoia Capital, Union Square Ventures, Cowboy Ventures, and PitchBook, which all contribute in their own way: via funding, event hosting, or by providing actionable data.

It’s not clear how involved the other VC firms the All Raise women represent are at this stage. But if the group is truly dedicated to moving the needle for female founders and investors, putting the institutional backing and support of these firms into action is a must.